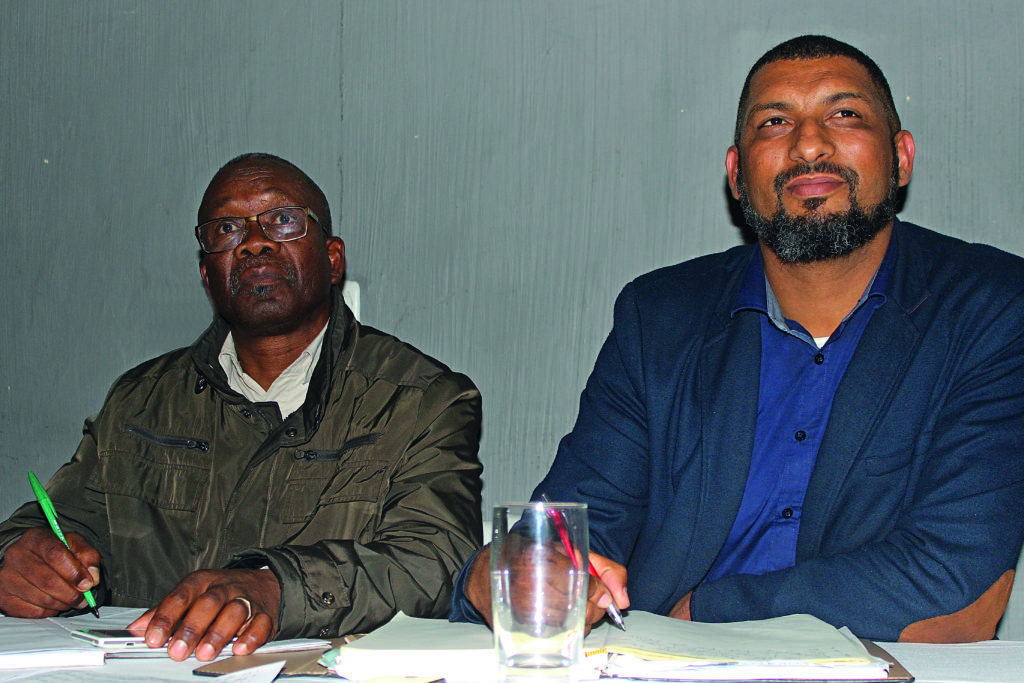 The new mayor of Makana municipality, Mzukisi Mpahlwa, made it clear that local officials and municipal unions are among the most serious obstacles he faces in trying to address service delivery problems in the area. While he stopped short of accusing municipal employees and councillors of sabotage, his new Chief Financial Officer (CFO), Gerard Goliath, said that this possibility was being investigated.

Makana residents congratulated Mpahlwa for having the courage to address them at a Grahamstown Residents’ Association (GRA) meeting on Monday evening. He guessed correctly that the hundred-plus people who waited for him at Prime, on New Street, would be angry about going into their third week of municipal strikes and multiple load-shedding events.

The Mayor’s address entitled ‘The Challenges facing the Municipality’ left no doubt that he had hit the ground running in his efforts to alleviate the water shortage in the area. Since being appointed in December last year, he already had meetings with the Minister of Water Affairs, Gugile Nkwinti, to brief him about the gravity of the situation in this area and to urgently request funds to procure equipment and infrastructure.

Mpahlwa told residents that the minister had allocated substantial amounts of money, including R22 million from the national Drought Relief Fund, towards easing Makana’s water problems, but that the benefits of these projects would only be noticed in stages.

Residents applauded the Mayor several times especially on promises to clean-up the administration of Makana, but perhaps his biggest applause came when he commented on the garbage and litter lying around town, “This city is very, very filthy.”

He said the unions and their ‘silent strike’ were only part of the problem because there were many workers available to help with clean-up campaigns but that his plans were thwarted by councillors who appeared to have other agendas.

Mpahlwa said “we cannot tolerate this filth” and offered himself as a last resort: “If it needs me to clean the city alone – I will do it.”

The new Mayor referred to other problems on his to-do list, including the many potholed streets of Makhanda, but appeared to be most concerned about the lack of efficiency within the City Hall offices. He recognised that there are too many employees but noted that it was very difficult to get rid of superfluous staff, even if they are not qualified for their jobs.

Residents gave the new CFO a healthy applause when he opened his presentation with a commitment to the municipality. Goliath said, “I didn’t come here to get a salary, I came to make a life.”

He addressed residents’ concerns that they would be milked to pay for the inefficiencies of the municipality when he referred to the difficulties in collecting debts: “We are not trying to get people to pay more, we want to get more people to pay.”

Goliath acknowledged that the bad debt problem is partly caused by inefficiencies in the meter-reading system and by the fact that a large number of households don’t receive any municipal bills at all. He said that the municipality has already appointed a debt collection company.

Although the meeting was sometimes testy, it essentially achieved the goal set by GRA chairperson, Philip Machanick, of reassuring residents that the new top administration was making a concerted effort to deal with service delivery issues facing the municipality.

Machanick said it was vital to address the water problem sooner rather than later because, “You can’t start too early, but you can start too late.”

He also pointed out that while residents are grateful to Dr Imtiaz Sooliman and his organisation, the Gift of the Givers, for delivering a truckload of water for immediate consumption, it would better serve long term interests if the charity could raise funds for water tanks. He said that if all houses in Makana had water tanks, residents would be better equipped to withstand cyclical droughts and water outages.

In a tense question and answer session after the mayor’s presentation, Ron Weissenberg of the community initiative, Makana Revive, challenged the municipality’s explanation of why the James Kleynhans Water Treatment Works was temporarily unable to treat water. Earlier this week, the municipality said it could not use water from the works for up to five days because of water turbidity from the Glen Melville dam.

Weissenberg said that treatment with the chemical compound, Aluminium sulphate with the formula Al2(SO4)3 would clear up the water within half an hour.

To prove his point, Weissenberg produced a five-litre container of muddy water which he poured into two smaller glass jars. In the one jar he added some of the chemical compound while the other only had the muddy water.

He left the two jars on the table in front of GRA chair, Philip Machanick, while the meeting proceeded with another round of questions.

After that round, the water in the jar with the aluminium sulphate was clear enough for Weissenberg to drink from. (See photos).