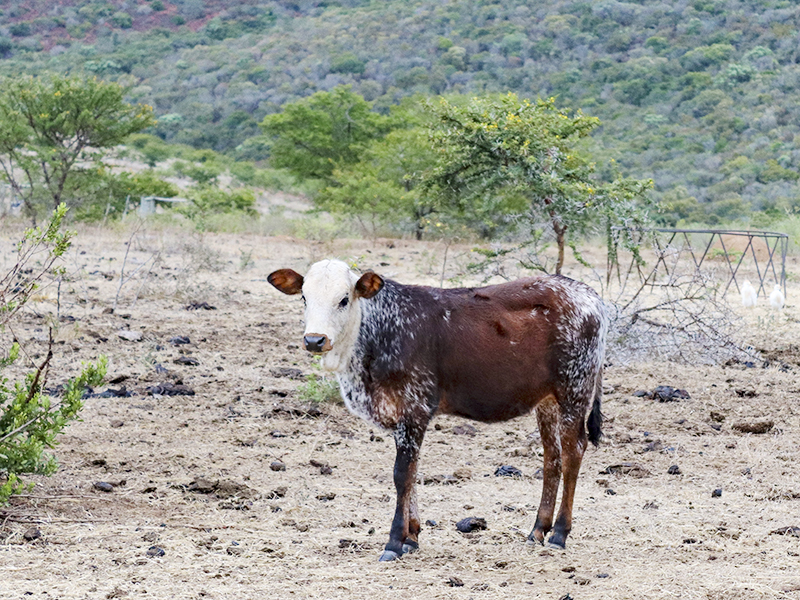 Stock farmers are struggling to maintain their herds on the parched veld, as they enter the fourth year of the worst drought in a century. Photo: Stephen Kisbey-Green

The province’s farmers have been battling the worst drought in a century for the past four years, says Agri Eastern Cape president, Dougie Stern.

The cumulative effect of four consecutive years of way-below-average rainfall is placing an enormous financial strain on farmers. “They have had to spend money simply to keep their productive animals in a productive state,” he said.

He said the situation was “critical” in about two-thirds of the province, with the western half – including the Makana and Bedford districts – worst affected.

“It is a sad reality that we have had absolutely no assistance as commercial farmers from either the national or provincial governments. Agri SA has been negotiating hard with the national government for national disaster assistance, but nothing has been forthcoming and it appears that the disaster relief fund has been exhausted,” Stern said.

“There is a process that must be followed. The extension services are supposed to report on the conditions in each municipality. Municipal managers of each district should put in an application to have that municipality declared a disaster area. That goes to the Department of Cooperative Governance and Traditional Affairs (COGTA) and they then and they do the necessary applications to the provincial and national treasuries. We are trying to fast track this process.

“I am going to make an appointment with the Eastern Cape MEC for Agriculture because the farmers are in trouble. There is no question about it. And if it doesn’t rain within the next two months the situation is going to become dire,” Stern said.

The release of disaster relief funds is a problem in South Africa, according to Dr Christo Coetzee, a researcher at North-West University’s African Centre for Disaster Management.

It takes anywhere from nine months to two years for drought aid to reach the drought-stricken farmers it was intended for, Coetzee said.

The declaration of a state of disaster by local or provincial governments is the first step to get the ball rolling for the provision of relief to the affected farming communities. However, the process of declaration is often criticised as being too complex and involving too many levels of government bureaucracy.

Another factor that plays a role in the declaration of a state of disaster is political will. Politicians are often cautious about declaring a state of disaster lest it should create an impression that the province or municipality is poorly managed, Coetzee said.

Meanwhile, climate scientists warn that 2019 may be the warmest year on record largely as the result of a possible El Niño event exacerbated by man-made global warming.

El Niño is a part of a routine climate pattern that occurs when sea-surface temperatures in the tropical Pacific Ocean rise to above-normal levels for an extended period of time. It can last anywhere from 4 to 16 months and it typically has a warming influence on the global temperature.

Stern said there had been a shortage of meat until November last year when suddenly the prices fell dramatically – and yet the supermarkets did not bring their prices down.

“The argument from the supermarkets was, well it’s December and we have to harvest our profits. I find that quite disgusting, to say the least. We as producers are price-takers and not price-makers.

“I think that in the next few months there is going to be a dramatic shortage and prices will climb even further. The productive capacity of our animals has declined dramatically.”