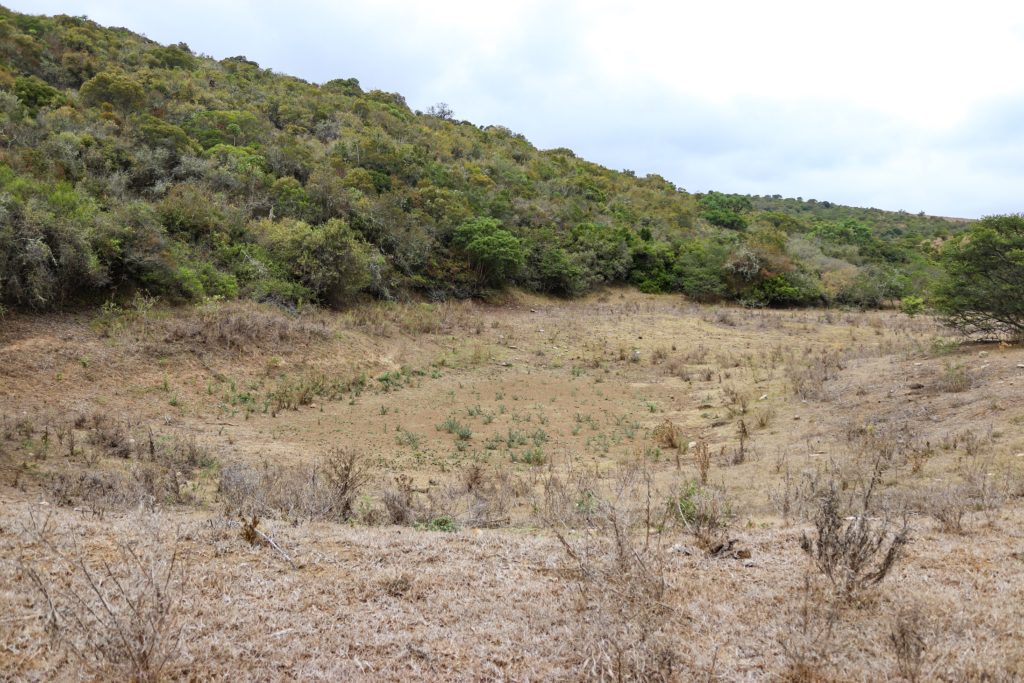 Many of the local dams have dried up completely, with the grass in and around the dam drying up and turning brown around them. Farmers estimate that it could take up to 400mm of rain for the grass to come back to its natural and healthy green colour, while much more water is needed in order to fill these dams back up to a useable capacity. Photo: Stephen Kisbey-Green

Rock-bottom prices for dairy and pineapples, factoring in the new minimum wage and the knock-on effects of the Limpopo foot-and-mouth disease outbreak are adding to the strain that commercial operations on the farms around Makhanda (Grahamstown) are experiencing. Grocott’s Mail spoke to one of the region’s more successful commercial farmers, Justin Stirk.

In the 27 years that Justin Stirk has been farming, this is the worst period the business has ever seen.

Stirk is one of the region’s most successful commercial farmers, who has constantly adapted to keep his operations viable. Stirk’s Bonsmara cattle regularly fetch top prices at local sales, but he has diversified to include game, macadamians and peppers in his farming mix.

With three years of below average rainfall and three dry winters, last year saw less than a third of the rainfall the region needed.

“It’s like we’ve been through five rugby matches in an hour,” Stirk told Grocott’s Mail. “It’s not pleasant. In the 27 years I’ve been farming, this is the worst.”

“We’re running out of grass for our cattle, which gets us into financial problems. We have to buy feed – but no one has, so those who have are making money out of it.”

The maize price was rocketing because everyone had planted late (because of the late rains), so to feed animals maize now was exorbitant.

“All our dams are finished. We’re eking out the last bit to get on to our crops,” Stirk said.

“Now even boreholes are running dry in some parts of the province and people are carting water just to keep stock going. I’ve never heard of so many people having their boreholes run dry.”

There’s not much a farmer could do when that happened, Stirk said.

“There’s just no water unless you go to the huge expense of drilling deeper, or moving water around with trailers and tankers.”

Dairy farmers in the area have taken a hit, Stirk says, with milk prices dropping substantially in the past six months.

“Dairy farms are intensive production units and feed costs have gone through the roof. There a shortage of roughage – and what you get is highly priced.”

Pineapples have long made their mark on the hills between Grahamstown and the sea – and on the national and international markets.

“Pineapples compete on the world export market and right now, they’re banging heads against Thailand. What farmers are getting is way below what they’re putting in. They’re getting around R500 a ton below the cost of production.”

The recent case of foot and mouth disease in Limpopo has had a severe effect on the meat trade. “There’s only one notified case in Limpopo – but that shuts the whole export market for South Africa,” Stirk said.

Stirk believes commercial farmers are being used as a political football.

“Everyone’s crying out for drought aid – but not one commercial farmer recieves one bale of lucerne,” he said. “That aid only goes to emerging farmers.

“Everything’s stacked up against us at the moment. Even when we do come out of it, economically things aren’t going to be good.

“Food prices will go through the roof some time – and the farmers will be blamed, but it’s not our fault: we’re just trying to survive.

“It’s not pretty. Emotionally it’s very difficult to watch this happen and there’s nothing you can do. This is the worst drought ever.

“But we’ve been through these things before and we’ll get through them again.

“The only thing that keeps us going is the hope of rain. If we have decent rain soon, things will change overnight. Otherwise, this region is in dire straits.”