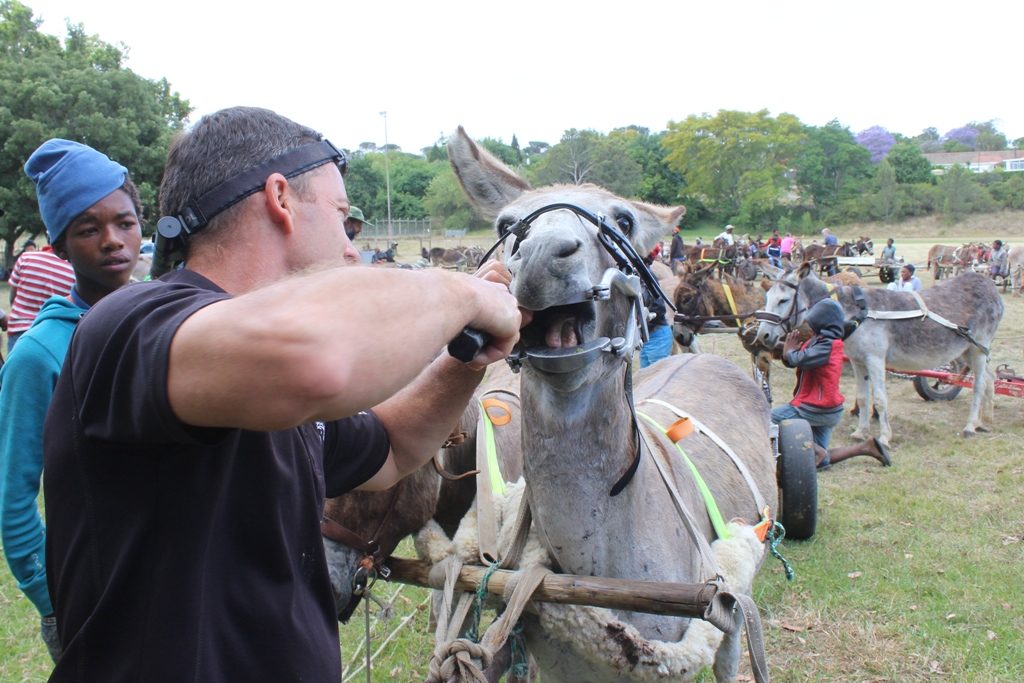 A parade of 27 donkey carts with their owners and families, followed by a day of treatment and care, was the colourful finale to a fortnight of festive cheer for Makhanda’s (Grahamstown’s) animals. The handover of a collection of pet food and care products to the Grahamstown SPCA by Santa Cause for Paws started the season on a good note and a farm day at Radway Green saw 21 animals treated by community service vets with support from the adjoining Buffalo Kloof reserve, among others.

Equine dental technician Donovan Lamerton assisted by his son Joash (8) had a queue of 48 donkeys waiting to have their teeth filed at the final stage of the Donkey Carnival at Albany Field on Saturday 8 December. The treatment day followed the colourful annual Donkey Parade.

Twenty-seven donkey carts with two donkeys each, three horses and  three dogs took part in the  festive procession from Fingo Square to the Albany Field, where the carts were judged on the overall health and welfare of the animals, the quality of their harnesses and the mechanical soundness of the carts.

The event is organised annually. Driving force Annerie Wolmarans said this was her 30th Donkey Carnival. The SPCA’s Mark Thomas helped co-ordinate this year’s event, and was one of the judges. In addition to the dental work the donkeys were getting, veterinarian Annie Mears from Amakhala game reserve supervised complete health checks, wound treatment, hoof trimming and cleaning and tick treatment.

A number of experts volunteered their time and services, with Helen Grapes from Kleinemond administering tick grease to the donkeys.

A skill of outgoing SPCA Manager Mark Thomas is mechanical maintenance. He spent the day hands-on, greasing all the wheel bearings on all the carts and showing the owners this important maintenance skill.

Medication for the donkeys was provided by the State Veterinarian.

“It was nice to do this,” he said. “And even though these donkeys are for working, it’s also nice to make them look like this,” he said, pointing to two smart new red harnesses that had been fitted to his donkeys in place of the old gear. The harnesses, made of flat webbing, are also friendlier for the animals because they don’t rub their skin.

The team treated 21 animals, with four of those just receiving vaccines.

“We’ve lost some dogs because of disease,” he said. So this is good.”

A highlight in local animal care is the annual Santa Cause for Paws collection in Makhanda (Grahamstown) where animal lovers donate cash or goodie boxes made up of treats for either cats or dogs, plus their humans.

Co-ordinators Shashay Bates and Candice Owen additionally made up 63 boxes, spending around R140 on each box.

All of this was handed over in a happy handover ceremony at the Grahamstown SPCA on 1 December that also marked SPCA Manager Mark Thomas’s last handover. Mark and his wife Tamsyn Thomas this week moved to Johannesburg.