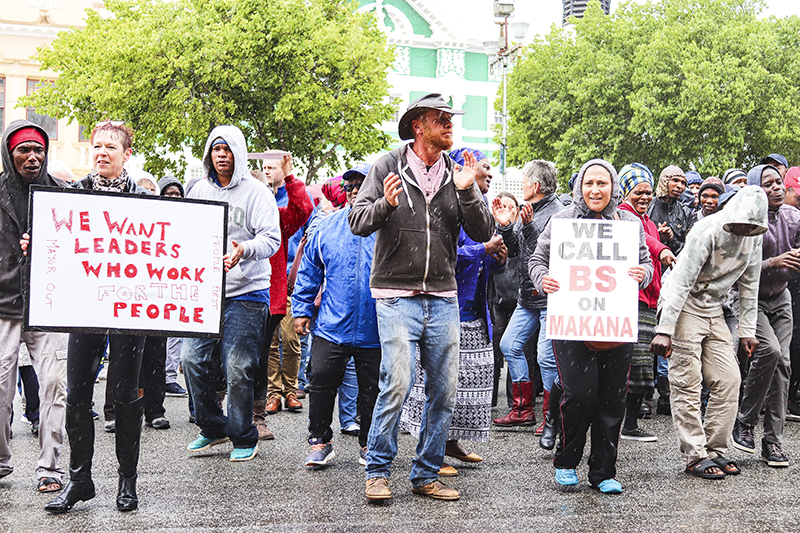 Makhanda (Grahamstown) residents march in protest to the Makana City Hall on Tuesday 9 November, where they handed over a petition. Photo: Stephen Kisbey-Green

By Kathryn Cleary and Sue Maclennan

On Tuesday 6 November hundreds of residents marched from Rhodes University to the Makana City Hall, calling for the dissolution of the local municipality. The march followed a two-week-long protest outside Makana’s Finance Department and a social media campaign highlighting financial and administrative failures.

Key among these was the municipality’s failure to pay its Eskom account, resulting in the entity starting legal processes to throttle power to Makhanda (Grahamstown) starting on 4 December. It has since been established that Makana has paid Eskom an amount and had in fact itself overstated its debt to the entity in Council documents.

The video, which went viral, called for the dissolution of the municipality in accordance with Section 139(1)(c) of the Constitution. The call to action at the end of the video was for concerned residents and others to sign a petition to this effect.

Section 139 states; “When a municipality cannot or does not fulfil an executive obligation in terms of the Constitution or legislation, the relevant provincial executive may intervene by taking any appropriate steps to ensure fulfilment of that obligation…”

Sub-section (c) continues that these steps may include, “dissolving the Municipal Council and appointing an administrator until a newly elected Municipal Council has been declared elected, if exceptional circumstances warrant such a step”.

The Grahamstown Residents Association (GRA) and the Unemployed People’s Movement (UPM), added their numbers to the march, which converged at the City Hall around midday.

Residents were in a restive mood following two weeks of hell with extreme temperatures exacerbating water and electricity outages. Smoke – first from the municipal landfill site and then wildfires on the surrounding hills – filled the city bowl with thick, toxic smoke for days. And members of the local Democratic Alliance (DA) caucus walked out of a heated council meeting, declaring their support for residents’ call to dissolve the municipality.

But service delivery issues in Makana were nothing new, residents said. In his address to protesters, GRA Secretary Tim Bull said they had been engaging with the municipality for four years, hoping in vain for responsiveness.

The morning of the march a poster circulated on social media by local ANC leadership called for a counter-march to save the ANC-run municipality. The march was planned “to defend our municipality” Councillor Malibongwe Kubalo, Ward 7 Branch Chairperson, told Grocott’s Mail. However, without the backing of regional leadership, they called it off.

Regional Chair Scara Njadayi, in a letter to local organisers seen by Grocott’s Mail, said, “I think the content carried in the Makana ANC Poster of Defending the Municipality is in contrast with the founding principles, tradition and values of the congress movement. My understanding is that the ANC is leaning towards the poor and the working class therefore it cannot at any given time be against the masses.”

“Further Councillors and BECs of the ANC must be tolerant to any dissent view on how things are unfolding in the Municipality, their role is to bring sanity, provide leadership and ultimately avoid any eventuality [calamity].”

As a result, the counter-march did not occur.

When residents arrived at the City Hall, GRA Chairperson Phil Machanick addressed the crowd: “We’re not living in a war zone,” he said. “This is why people should sign the petition.”

Machanick stated that the petition had over 20 722 signatures, an impressive number considering the 24 000 voters who participated in the 2016 Municipal elections.

Ayanda Kota of the UPM pleaded to the crowd, “If you disagree what I am saying, I am inviting you to come here and tell these people what Constitution [Section] 139 is saying, and if we are wrong, we will disperse and go home.

Bull from the GRA read out the petition, which stated that residents were not given access to the municipal services they were entitled to, and that the municipality had failed to “promote a safe, healthy environment”.

“We call on the provincial government to place Makana Municipality under full administration by section 139 (1) (c) which means dissolution of the Council and fresh elections.”

The petition was met with cheers and thunderous applause from the crowd.

“It is self-evident that the leadership has failed”, stated Bull. “It has failed beyond redemption. We have engaged and engaged and offered to help over the past four years without result.

The petition was officially handed over and signed by Council Speaker Yandiswa Vara, which would then be given to MEC Fikile Xasa and sent for further review in Pretoria.

Speaking at a meeting called at BB Zondani Hall around 11.30am, ANC Subregion Chair Mabhuti Matyumza said they had called off their proposed counter-action because they heard elements were planning to hijack their march in order to make the ANC look bad.

“We decided to arrange our march for another time that we will announce,” Matyumza said.

Commenting on the petition and the call to dissolve the Council, he said, “You canot deny that this is a democratically elected Council. What they are trying to do is take a shortcut by dissolving it.

“There is no shortcut to democracy.”