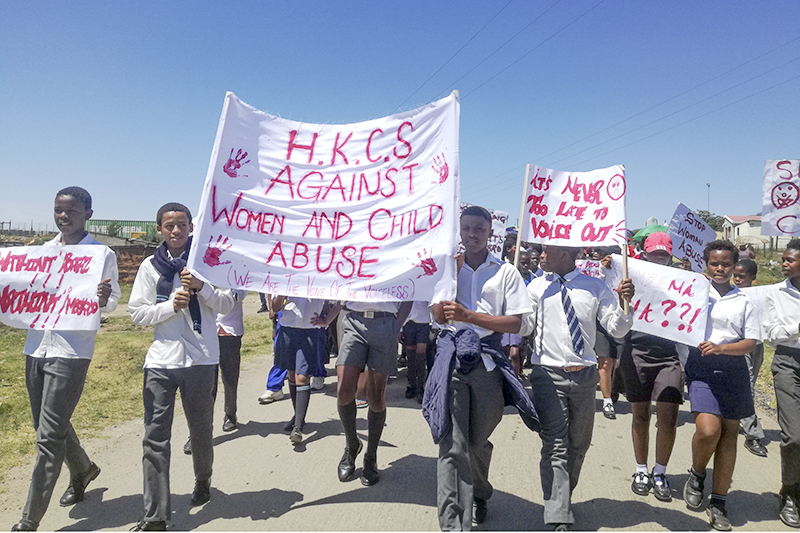 Pupils from Alicedale schools Hendrik Kanise Combined and George Jacques Primary brave the scorching heat on Thursday 25 October and took to the streets of KwaNonzwakazi and Transriviere to raise awareness about gender based violence, rape and child abuse. Photo: Candice Louw-Arnolds

History was made on 25 October 2018, when the only two schools serving the Alicedale community embarked on a campaign to raise awareness against gender-based violence, rape and child abuse.

Learners from local schools Hendrik Kanise Combined and George Jacques Primary teamed up to brave the scorching heat and took to the streets of both the KwaNonzwakazi and Transriviere communities to raise awareness on the above social ills.

According to Deputy Principal and Life Orientation Head at Hendrik Kanise school, Candice Louw-Arnolds, this campaign has been long overdue and is only the first of many to come.

“Too many of our learners are victims of these kinds of abuses and suffer in silence. Due to the size of our town, most of the perpetrators are well known to the victims, and are often even family members.

“As a result of this, most of the victims are afraid to come forward, as labelling and stigmatisation is usually worse in small towns where everyone knows everyone. Reporting family members is seen as bringing shame to one’s family. Thus victims remain silent out of fear of being ostracised by the family as well as the community.”

School principal Monde Myona expressed deep concern for the impact that these social ills have had on learners’ education.

“A number of our learners have fallen victim to these abuses in the past, and this has had a great impact on their education and well-being in general,” Myona said.

Regarding the role of the schools as agents of change he said, “Schools in rural areas are essentially a beacon of hope and knowledge for the marginalised, and we therefore would be failing dismally in our duty as educators if we are merely a silent witness to these atrocities instead of addressing  the social ills of society.

“We have therefore decided to embark upon this awareness campaign to educate the ignorant, and to encourage victims to speak out in order to bring perpetrators to book.

“Hopefully this will yield positive results.

“We are grateful to our neighbouring school George Jacques Primary, who saw the bigger picture and joined in our action, as we are part of one large community.”

Learners whole-heartedly embraced the campaign and participated with high levels of enthusiasm, despite the scorching heat.

Previous ArticleYour loyalty may be rewarded
Next Article Heartbreak, humour in chronicle of love