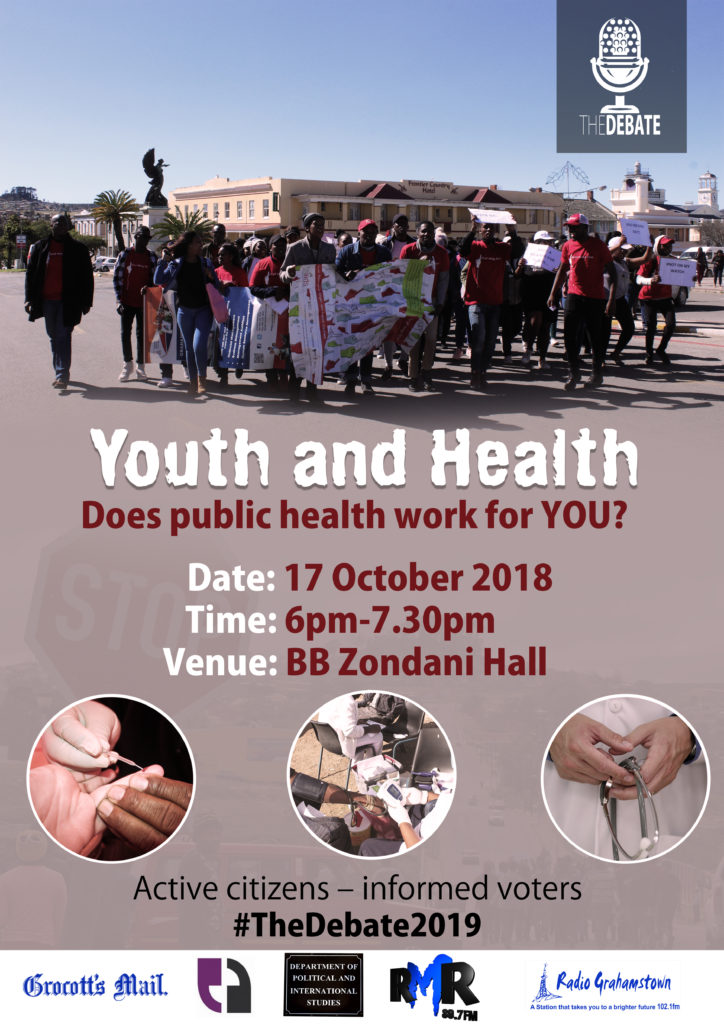 How do young people in Makana experience public health? is the question we’re asking in the next edition of #TheDebate2019 in BB Zondani Hall on Wednesday 24 October at 6pm.

Talking about their experience of working with young people in our town will be representatives from local NGO Raphael Centre and national NGO the Rural Health Action Project, with input from UPSTART Youth and local health practitioners. And there to answer tough questions will be Health Superintendent General for the Eastern Cape Dr Thobile Mbengashe, who yesterday confirmed his participation in the 24 October edition of The Debate.

Some of the issues that will be highlighted are:
* Youth lifestyles and social support structures
* Access to mental health care services for young people

#TheDebate2019 is a series of six public events, once a month, that aim to both educate voters (with input from the IEC), as well as air the big national issues in the local space. These include Land; Education; Economy; Health; Safety and security; Governance and IGR. The intention is to encourage informed participation by Makana residents in the 2019 national election. We are using a different community hall for each event, taking it across the city and the municipality.

Grocott’s Mail is a partner in this media project with Radio Grahamstown, Rhodes Music Radio (RMR), Rhodes School of Journalism and Media Studies and the Rhodes Department of Politics and International Studies. This collective hosted debates in Makana leading up to the 2016 local government elections.

We launched the series with a debate on Wednesday 19 September on Governance and IGR, using the call by a very vocal group of Grahamstown (Makhanda) residents for a rates boycott to start discussion on the Constitutional responsibilities of state and citizens, and what recourse citizens have when they’re unhappy with service delivery. Our panellists were Makana Mayor Nomhle Gaga, the Public Service Accountability Monitor and the Grahamstown Residents Association.

#TheDebate2019 series is recorded, and edited before being broadcast on RMR and Radio Grahamstown. The final two events, in March and April 2019, will be broadcast live.