Getting things done in space 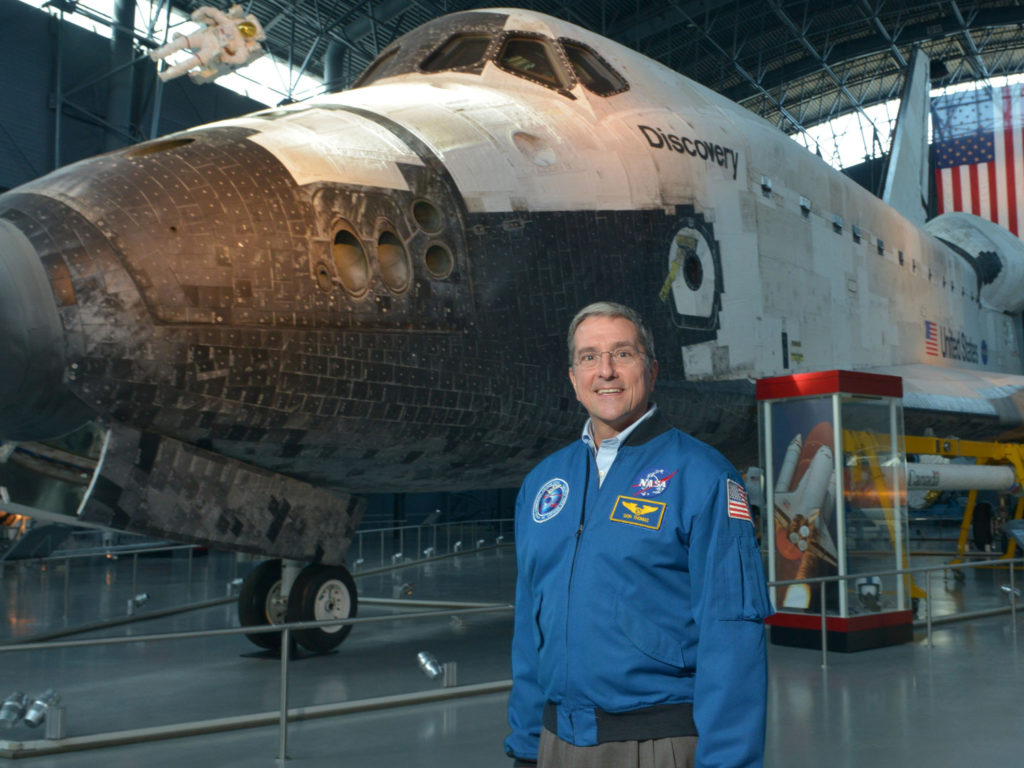 What would it take for you to sit atop about two million litres of super-cold liquid hydrogen and liquid oxygen, and then have it ignited to blast you off into space? Only a crazy person, right?

Well, one such crazy person has not only done it – and survived – but he did it four times. NASA astronaut and mission specialist, Dr Don Thomas completed three flights on the Columbia and one on the Discovery as part of the “All-Ohio Space Shuttle Mission”.

Thomas is coming to Grahamstown (Makhanda) to tell us about his missions aboard the Space Shuttle and how he coped with the challenges of working and living in space. Currently on his fifth visit to South Africa, he will be speaking at Victoria Girls’ High School on September 26.

The educational NGO, Living Maths, invited Thomas to this country once again following the success of last year’s three city sell-out tour of his presentation on “Living and working in Space”. Thomas says the aim of his visit is to “inspire and excite young learners to pursue careers in the maths, the sciences, and the engineering fields”.

He wants to change lives because he was inspired to be an astronaut when he was only six years old and watched the launch of the first American into space back in 1961. Thomas explains, “Watching that launch on a small TV at my school forever changed my life and motivated me to work hard and always do my best in school. So I know the power of inspiration, and together with Living Maths, we are hoping to inspire the next generation of mathematicians, engineers, scientists, and explorers in South Africa”.

Thomas believes in the power of persistence as NASA rejected his application to join the space programme four times before they finally accepted him. He says, “I’m grateful to now be one of only 550 humans to have flown in space and feel a responsibility to share my story and experiences. My story is proof that perseverance pays off and I want to pass on the gift”.

During his twenty-year tenure with NASA, Thomas logged over 1,040 hours of adventuring in space and completed 692 orbits of the Earth.

He admits that even though he was super excited by his space missions, he was always a little scared, “I frequently tell people I was 10% scared and 90% excited. I think any astronaut who tells you they’re not scared are either stupid or crazy, because you should be a little scared sitting on top of a fully fuelled rocket”.

As a mission specialist, three of his four flights were dedicated science flights that involved performing hundreds of experiments, all looking into the effects of zero-gravity. He describes himself as a science enthusiast who always enjoyed learning all he could in the sciences. Thomas explains, “I studied physics at university because I found it powerful for explaining the universe around me. I enjoy learning new things and discovering things that were once unknown”.

He believes that the desire to explore is one of the essential characteristics that make humans unique among all other species. He firmly believes that it is an innate human trait to explore, “For me it doesn’t matter what continent you live on, what language you speak, or what religion you practice, humans explore. We cross oceans, we climb mountains, we travel to space and explore the unknown”.

Find out more when Dr Don Thomas addresses Makana at Victoria Girls High School from 6pm-7.30pm on September 26. Tickets can be purchased through www.quicket.co.za for R60 to R80. For more information on the Living Maths Space Tour 2018 visit www.livingmaths.com or call Monique Murphy on 072 488 8641

To read a transcript of an exclusive Grocott’s Mail interview with Dr Thomas go to: bit.ly/GrocAstro