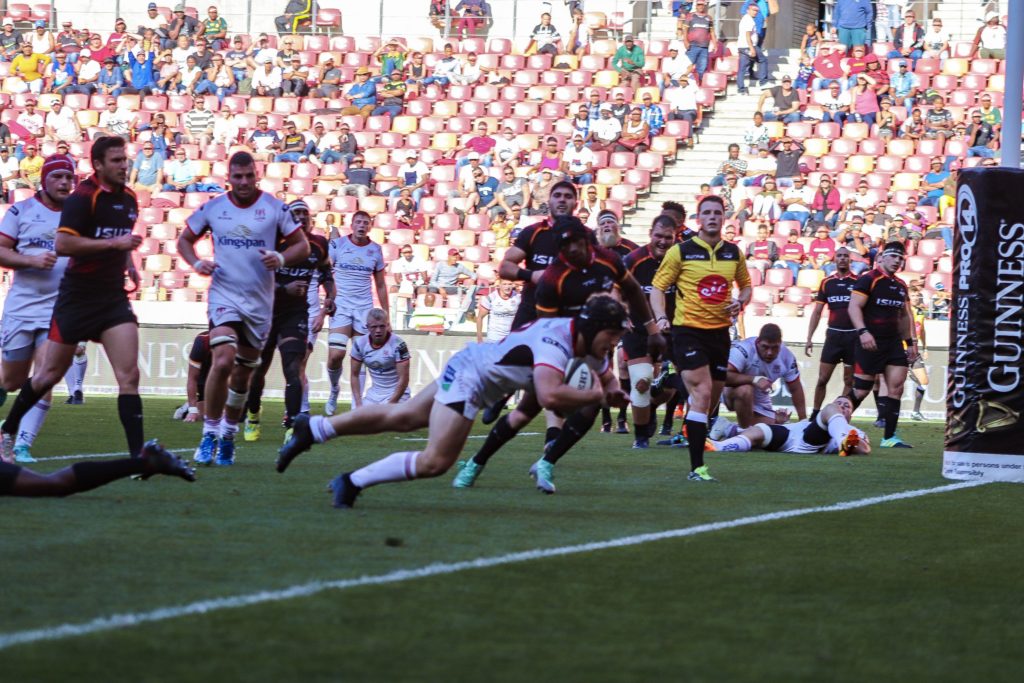 Angus Curtis dives over the line for Ulster’s third try against the Kings on the stroke of full time. Photo: Stephen Kisbey-Green

The Isuzu Southern Kings maiden home game of the 2018/2019 Guinness Pro14 saw the home team take on Ulster of Northern Ireland on 16 September 2018. Ulster were coming off two successive wins after two rounds of the season, and were looking at maintaining their record in this fixture.

The Kings were poor defensively, with the penalties piling up against Kings throughout the game. The hosts gave away a lot of penalties in the first half, which allowed Ulster to edge into the lead through John Cooney’s boot. Both teams were plagued with simple errors resulting in play recycling deep into each team’s territory. The first half also saw three yellow cards being handed out by the referee: Martinus Burger of the Kings, and Alan O’Connor as well as Rob Herring of Ulster taking 10 minutes on the side line.

The second half saw the ball touch over the white line four times in total, with the Kings scoring once and Ulster touching over the line three times. The Kings scored through skipper Michael Willemse early in the second half, which was their solitary contribution to the final score. Ulster however scored through Marcell Coetzee, Angus Kernohan and Angus Curtis. Ulster struggled for momentum throughout the first half however began to build momentum throughout the second half. All three of Ulster’s tries were scored in the final twenty minutes proving the importance of the final quarter in this tier of professional rugby.

At the end of the game Ulster emerged victorious because they were able to build phases, and were more disciplined in the opposition’s half than their opposition in the second half which ultimately led to their victory. Despite the game being scrappy for the majority of play-time, Ulster proved to be superior through discipline and stamina. The visitors left with a convincing 7-28 victory over the Kings.

Ulster move on locally to play the Toyota Cheetahs next in Bloemfontein on 21 September and will be looking to maintain their undefeated record.

Ulster Head Coach Dan McFarland highlighted the breakdown as an area of importance in the match. “We came into the game fully aware that the Kings turn over a lot of ball at the breakdown,” said McFarland. “I do believe we’re improving there…there was some better work done there today.”

The Isuzu Southern Kings will be looking to learn lessons from this fixture and improve on all relevant aspects to their game for their next fixture. Kings Head Coach Deon Davids felt that there was a lot to be gained from his team’s defeat.

“Defensively, there were some good efforts from the players to keep Ulster out. Unfortunately, we were able to just create a few opportunities towards the end of the first half. Maybe at times we were just a bit over-eager when we had those opportunities…we should have just let our systems set in place.”

The season must go on, and Deon Davids will be focusing on analysing and improving his team’s performance for the next games as well as the rest of the season. The Kings will come up against The Glasgow Warriors next on 22 September, playing at ‘home’ in Port Elizabeth, at the NMU Madibaz Stadium.