‘This is war,’ says Mabuyane 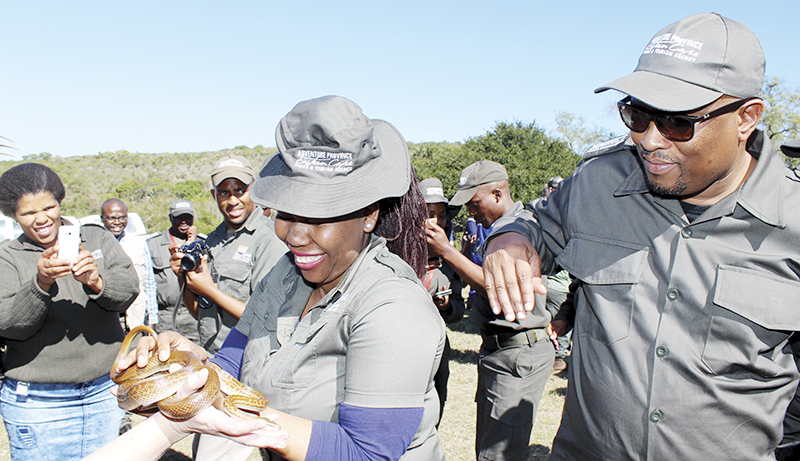 Phumeza Monde, acting reserve manager at Ongeluksnek Nature Reserve, carefully takes a brown house snake from the hands of Rhodes Zoology lecturer Shelley Edwards, while MEC for Economic Development and Tourism Oscar Mabuyane plucks up the courage to touch the non-venomous constrictor. The University’s Zoology and Entomology labs as well as the Centre for Biological Control were among the displays at a Field Rangers Day at Thomas Baines Nature Reserve on Friday 24 August. Photo: Sue Maclennan

Economic Development and Tourism MEC Oscar Mabuyane has promised more resources for the protection of the Eastern Cape’s natural heritage assets and said he would march alongside activists who chose to demonstrate ahead of the next appearance of rhino poaching accused, the Ndlovus, in the Grahamstown High Court on 26 November. Jabulani Ndlovu, Forget Ndlovu and Sikhumbuzo Ndlovu are facing 50 rhino poaching charges in connection with incidents across the province over the past five years.

The celebration of Field Rangers Day at Thomas Baines Reserve outside Grahamstown (Makhanda) on Friday 24 August was a tribute to what wildlife champion Andrew Muir described as “the first and last line of defence” in protecting the Eastern Cape’s natural heritage assets. As speakers painted a vivid picture of the increasing firepower and ruthlessness of criminals plundering South Africa’s biodiversity, they also spoke of the extraordinary courage and skill of the rangers at the heart of the “war”.

Rangers from reserves across the province managed by the Eastern Cape Parks and Tourism Agency were presented with awards by Mabuyane, who had arrived dressed in a field ranger’s uniform. His theme was solidarity with the rangers, and among the first words of his address were, “I stand with the rangers.”

The event came a day after the report of a cargo of weapons found on a ship docked outside Port Elizabeth, and Mabuyane spoke about the flood of illegal guns into Africa.

“Our continent is ravaged by never ending violent civil wars but produces less weapons,” he said, linking the influx of arms to the fact that poachers were heavily armed with dangerous and sophisticated weapons.

“The resources required to carry out your tasks effectively are enormous,” Mabuyane said. “I am convinced that the MEC of Finance in his balancing act of resource allocation will definitely not leave you behind. You can record me on that, because I will tell him.”

He cited the International Ranger Federation’s recording of 55 deaths of rangers in Africa in the past 12 months, and that since 2012, more than 269 rangers had died protecting Africa’s wildlife . “At least 176 of these brave men and women [were]gunned down by militia groups, unknown assailants or armed poachers working for multinational wildlife crime syndicates.”

Mabuyane said as of the end of 2017, 504 rhinos had been illegally killed inside Kruger National Park and 524 in other regions of South Africa, bringing the total to 1 028. This was a slight decline from the 1 054 animals killed in 2016.

Clearly poachers are at war and we cannot fold our arms and let them have their way.

Mabuyane said there had been an upsurge in poaching incidents in the Eastern Cape in the past two months. “To date a total of 16 rhinos have been poached in the Eastern Cape… clearly poachers are at war and we cannot fold our arms and let them have their way.”

Praising the work of the field rangers, he proposed the establishment of an education trust fund for the children of ECPTA Field Rangers.

Muir, who is the ECPTA Board Chair, said the MEC’s presence was an indication of how seriously the Province took the fight against poaching and degradation of natural resources. He emphasised the importance of their active partnerships with Sanparks, Working for Fire and Working for Water and how much they valued the staff on the ground.

“It’s the human capital in this institution that enables us to protect and honour our natural heritage,” Muir said.

His remark that the Eastern Cape is “the wealthiest province by a mile” in its biodiversity was echoed by Sanparks Chief Ranger Xolani Funda, who noted the irony that the provinces that had the richest natural heritage – Limpopo and the Eastern Cape – were the poorest in economic terms.

Funda, who is in charge of enforcement at Kruger Park, spoke of the level of threat that rangers now face.

“Social scientists criticise us for militarising the field,” Funda said. “But we are dealing with trained criminals.”