Garden in a wasteland 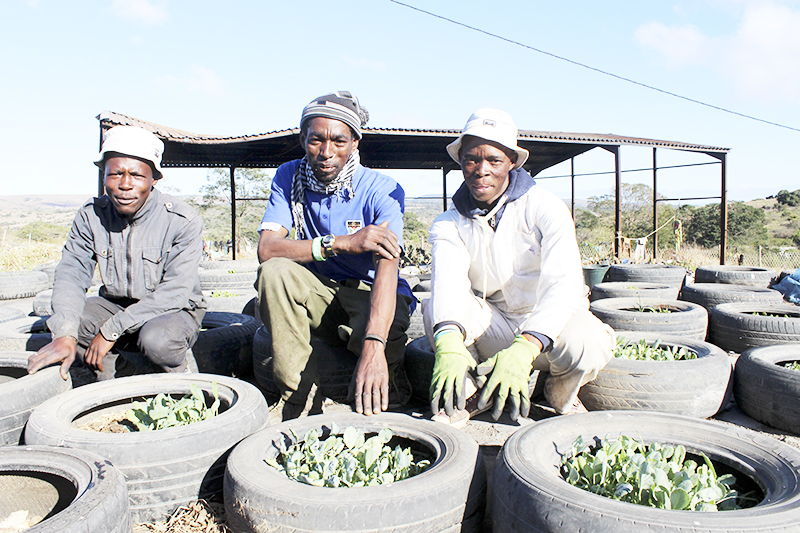 Vuyani Notyawa, Monde Xinwa and Xolani Mcobongi make their living from collecting waste at the municipal landfill site west of the industrial area. They live in Tantyi, Zolani and Xolani respectively, and spend their days at the dump.

They collect cardboard, paper, plastic, cans and electronics to sell on to recycling operations. How much they make depends on the weather and how many other people are at the site on any given day.
“In the rain, recyclers don’t buy paper,” says Xinwa. “It depends how many we are here, but it can R70-R150 that we make in a day.”

Recently a group of students from RMR at Rhodes University brought them seeds and some advice about how to grow vegetables using the hundreds of old tyres at the dump as mini-beds. Then RMR raised R3 000 which they used to buy tools, wheelbarrows and seed.

There are six of them in the group altogether. They’ve been growing spinach, cabbage, green onion, and carrot seedlings in the tyres since June and want to transplant them to a patch of land adjacent to the dump.

“What we want is to buy two donkeys and a cart and sell vegetables that we grow at the taxi rank,” said Xinwa.

Previous ArticleUpgrades for Toyota 86
Next Article Financial planning for women