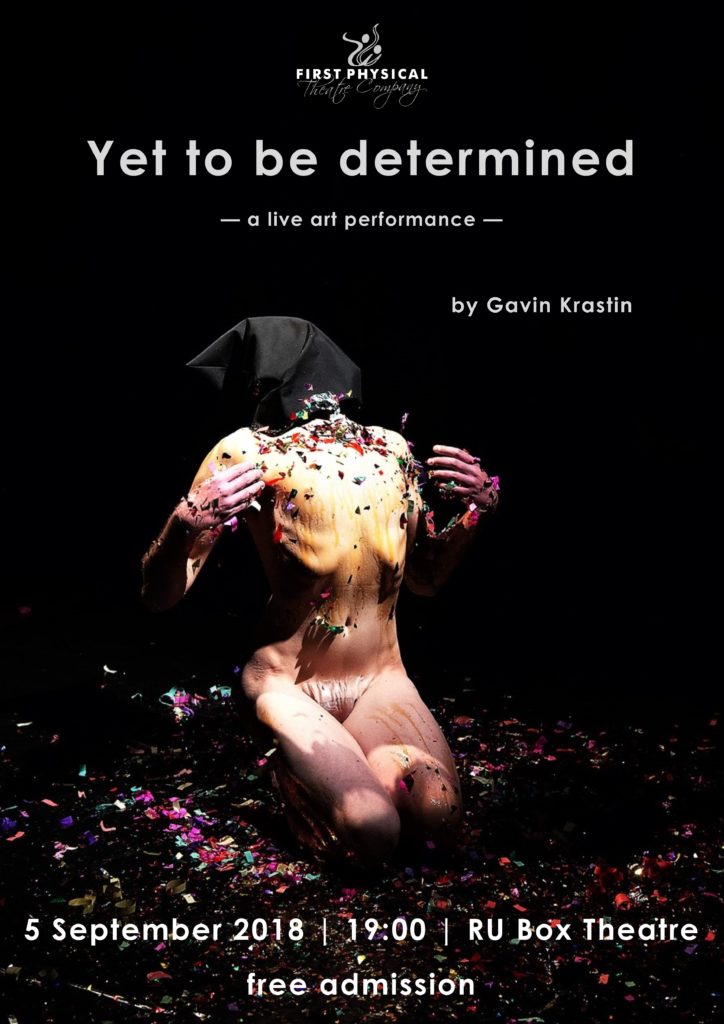 The First Physical Theatre Company, an affiliated project of Rhodes University Drama Department, showcases two performance works by acclaimed artists at the start of the fourth term, before touring to Cape Town, and you’re invited!

Athina Vahla, a choreographer based in England and Greece and working internationally, is currently visiting Rhodes University for a teaching and learning engagement where she has been working with participating third year and post-graduate drama students in association with First Physical Theatre Company. The public are invited to an open rehearsal and sharing of the work, entitled, DNA.

Vahla explains, “Using the simple hoola-hoop as a toy, symbol and physical challenge we took different routes in exploring potential meanings where manifestations of private and public worlds could emerge. Through disconnected and assembled sketches of circular motions involving the hypnotic plastic hoop, we offer a musing on aspiration, achievement and mastery as well as the accompanying failure and disappointment.”

DNA shows on Tuesday 4 September 2018 at 7pm in the Box Theatre at Rhodes Drama Department. It runs at 20 minutes in duration, followed by a brief discussion. Attendance is free and non-payable tickets are available at the door.

On the following evening First Physical Theatre Company presents Gavin Krastin’s Yet to be determined, fresh from premiering at the National Arts Festival and on route to the Institute for Creative Arts (ICA) Live Art Festival in Cape Town. Known for his experimental performances that are full of beauty yet hard-hitting, Krastin’s latest live art performance is an anti-narrative meditation on the comfort and fear in realising one’s own smallness.

Krastin explains, “The performance actively engages the audience, who play a part in determining the work. Through referenced and imagined ritual-like actions that centre on the body, my performance brings to the fore issues of independency as well as individualism within a group setting.”

Yet to be determined shows on Wednesday 5 September 2018 at 7pm in the Box Theatre at Rhodes Drama Department. It runs at 40 minutes in duration. Attendance is free and non-payable tickets are available at the door.

The work immediately tours to the prestigious ICA Live Art Festival in Cape Town. Along with Krastin’s Yet to be determined, First Physical Theatre Company is proud to co-produce the tour of Alan Parker and Gerard Bester’s Sometimes I have to lean in at the Live Art Festival.

Created and performed by Parker, choreographer and lecturer in physical performance at Rhodes Drama Department, and Bester, performer and Creative Director of the Hillbrow Theatre Project, Sometimes I have to lean in was originally commissioned for the Dance Umbrella in early 2018 for its 30th anniversary. The work is a consideration on the metaphorical and physical act of leaning. Parker explains that, beyond a game-play of leaning and gazing between the two, “what the work really explores is a ‘leaning in’ between the performers and their spectators, as the performers work to establish, and then question, the subtle, intimate push-and-pull between themselves and those who watch them.”

Gavin Krastin’s Yet to be determined shows on Tuesday 11 September 2018 at 7.30pm on Hiddingh Campus at the University of Cape Town as part of the ICA Live Art Festival. It runs at 40 minutes in duration and attendance is free.

Alan Parker and Gerard Bester’s Sometimes I have to lean in shows on Friday 14 September 2018 at 6pm on Hiddingh Campus at the University of Cape Town as part of the ICA Live Art Festival. It runs at 40 minutes in duration and attendance is free.

About the First Physical Theatre Company

The Grahamstown-based First Physical Theatre Company is a performance company affiliated to Rhodes University Drama Department that for 25 years has created a powerful platform for new South African performance. The company currently operates on a project-to-project basis as it nurtures and inspires an inventive and imaginative physical performance approach in young and established artists, while promoting a body-centric language and discourse that is provocative and curious.