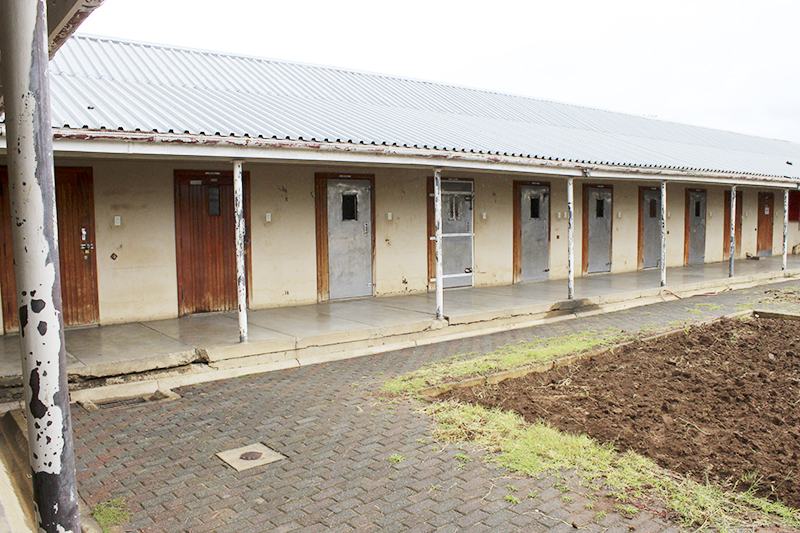 Former isolation cells in the Ward 6B complex. The depiction of one of these in the 4 March Rapport article was among the concerns that has triggered a series of investigations into the facility in the past six months. Photo: Sue Maclennan.

On 25 October 2010, Kim Smith’s* brother Lester Adams* was pronounced dead at Tower Hospital in Fort Beaufort. This was 13 days after his transfer from Fort England in Grahamstown (Makhanda). He was 45 years old.

Adams* had no pre-existing medical conditions, Smith* said, and was transferred to Tower for long-term psychiatric care. Since 2010, she has yet to receive any answers as to how her brother died.

In May this year, eight years later, another patient died at Tower Hospital. His family, similar to Smith’s*, is looking for answers.

Sango Jakatyana died the morning of 22 May 2018 after complaining of a stomach ache. Leaked nurses’ notes from that morning detail that three doctors were phoned before one was available to assist. The notes state that when the third doctor arrived, the patient had already passed away. The time frame between the first phone call at 8.35am and the time of death at 08.48am is less than 20 minutes.

Sources from Tower stated that one of the doctors was on call, but alleged they did not answer their phone.

“They told us they went to his room and found that he was vomiting and still in pain. Then they called the doctor who came and found him struggling to breathe that morning and he later died at ten to nine,” Xolelwa said.

The nurses’ notes state: “Doctor [Three] was then found at 08:48, before [they]arrived the user vomited a brownish liquid and stopped breathing. Doctor [Three] arrived at 08:50 and declared the patient dead.”

“He was not physically ill,” emphasised Xolelwa.

“It was just [a]shock to learn that he was sick for less than an hour and then died while he was in the care of medical staff. It was shock and anger at the explanations as well. What we were told and what was out there [in the media]was not the same.”

Grocott’s Mail earlier reported that police had confirmed the death at Tower. This was alongside staff speculation that the death was linked to food poisoning. The Department of Health confirmed that 37 patients had been ill with diarrhoea, but said Sango’s death was unrelated.

Former Department of Health Spokesperson Sizwe Kupelo said: “The patient… died not because of diarrhoea, but [because his]condition changed suddenly and a doctor was called and by the time he attended to him he unfortunately died.”

Xolelwa felt otherwise: “I don’t believe that his death was isolated from the reports of the other patients who were hospitalised due to food that had expired.”

Xolelwa’s and Smith’s* stories are eight years apart, but have one thing in common. The death certificates for both their family members record “natural” as the cause of death.

Sango’s body went for a post-mortem, Adams’s* did not.

“The conclusion of the post-mortem said he had died of an abnormally large colon,” said Xolelwa.

The report states, “The death of a patient during the alleged food poisoning outbreak was proven through post mortem findings to be due to natural causes.”

Annexure 3 in the report provides a copy of the laboratory results of the food product in question, revealing that the product tested negative for Listeria monocytogenes – one of a number of pathogens that cause food poisoning.

The report also highlights poor sanitation and pest control in the kitchen.

“Food was prepared in a kitchen of poor quality standards. There are no cleaning checklists; the kitchen was found to be dirty.”

“I think they wanted to hide something”, she said.

“They said they wanted the police to do their job quickly, so that only gave me the impression that they didn’t want us to hear the statements that the doctor who declared him dead would be giving to the police, so they wanted us to only hear their side of the story.”

The declaration of “natural causes” was raised as a concern in several of the Life Esidimeni cases. In Sarah Wild’s article, Esidimeni: Doctors erase ‘unnatural’ deaths, the death certificate of a patient who was found dead in their bed was scrutinised.

The article states, “Their certificate says ‘natural causes’, without any description of what caused their death. This is in contravention of South African law, as well as the guidelines for filling out death certificates.”

The story of Adams’s* death has striking similarities.

“They didn’t tell me at all how he died,” Smith* said. “They just said he passed away during the night and they [were]waiting for a doctor to come.”

Adams’s* death certificate and the Notice of Death form (DHA-1663) both list “natural causes” without any further information.

Section 15 (2) of the Act states: “A medical practitioner who did not attend any person before his or her death but after the death of the person examined the corpse and is satisfied that the death was due to natural causes, may issue a prescribed certificate to that effect.”

Section 15 (3) continues: “If a medical practitioner is of the opinion that the death was due to other than natural causes, he or she shall not issue a certificate mentioned in subsection (1) or (2) and shall inform a police officer as to his opinion in that regard.”

At the time of Adams’s* death, Smith* was unaware of her right to request a post-mortem.

Leaked photographs of Tower Hospital death registers list Adams’s* death on 25 October 2010 as the only death for that month. However, the word “NIL” is written below, causing speculation as to how and when his death was accounted for.

Makgoba’s report discusses the poor record keeping at Tower: “There are no control measures/systems in place for people accessing essential records this includes death registers.” The report states that this puts Tower at “high risk for inaccurate reporting and loss of data integrity”.

The report informs, “The death registers commonly included [mental health care user]names, ID numbers, medical and psychiatric diagnosis, date of death and the cause of death.”

The Department of Health was approached for comment on Adams’s* death as well as the number of deaths for 2010. Their response issued by spokesperson Lwandile Sicwetscha on 13 August 2018 was as follows:

“Our statement on this [matter]still remains the same. The department will await conclusion and release of Health Ombudsman report and release of findings into the Tower Hospital matters.”

“I want to know, what killed him,” said Smith*. “For all these people that cannot fight for themselves, something needs to be done.”

South African Society of Psychiatrists (SASOP) President, Bernard Janse van Rensburg was approached for comment on Smith’s* case. He told Grocott’s Mail that “Any information that becomes available from family or other sources of possible problems indicating that required procedures may not have been followed, should be made known.” He reiterated SASOP’s standing concern about Tower Hospital’s record-keeping, particularly the handwritten death registers.

Adams’s* DHA-1663 form section D (1) records the attending medical practitioner/professional nurse as “N SNOMBO” on 25 October 2010, with the cause of death marked as “natural causes”.

Makgoba’s 2018 report cites Dr Snombo in reference to another patient who was found dead on the hospital grounds in November 2017. “Dr Snombo who was on call when notified did not come on site to examine and certify the patient dead. The cause of death was declared natural.”

The report states, “Dr Snombo declared the cause of death as natural, based on the diseases that the patient had.”

The report furthers that Dr Snombo “deviated from the professional code of conduct by certifying a patient who was found on the hospital grounds dead over the phone and failed to open a case of inquest for the death”.

Dr Snombo was requested to respond to Adams’s* death when the Department of Health was approached for comment. The response is as stated previously in this article.

In terms of accountability, a medical practitioner anonymously told Grocott’s Mail that the hospital manager, as well as the certifying doctor were responsible for any procedural errors in reporting Adams’s* death.

The funeral service who cared for Adams’s* body were also approached for more information. They stated under anonymity that the paperwork they received from Tower was in order, but the cause of death was confidential. The undertaker received four pages inclusive of the DHA-1663, and stated that the fourth page (i.e. Part G) contained the confidential cause of death. They stated that this form was given to Home Affairs.

Regulation 23 of the Births and Deaths Registration Act makes reference to “Part G” of Form DHA-1663. Part G is confidential, and is not seen by the undertakers or family members.

Part G sub-section 77 states “causes of death”, including the “immediate cause” and “underlying cause”. This information is to be filled out by the medical practitioner, professional nurse or forensic pathologist “who has determined the cause of death”.

The undertaker told Grocott’s Mail that they have no way of telling if the cause of death is natural or unnatural. “The only person that would know is the doctor,” they said.

Smith* and Xolelwa Jakatyana continue to search for answers to the death of their loved ones.

“I’d tell him that I’m sorry this had to happen to him,” said a tearful Xolelwa just days after her cousin’s funeral.

“I’m sorry he’s the one who had to die. We had hoped as the entire family that his death wouldn’t come while he was still mentally ill. We had all hoped that one day he would come back home, the person we knew, as the person he was born as.”

“Heads need to roll,” she said. “What happened to my brother could happen to any of the patients there. I need for the Department of Health and for Tower hospital to acknowledge their wrongdoing and their mistakes. The sooner they acknowledge their mistakes then the sooner they can make changes. If nothing happens and now they keep lying, things are going to stay the same, and that means that more people are going to die.”

“[Lester*] was the type of person who was always there for everybody, and he wouldn’t like to see others hurt,” said Smith*.

“We used to listen to Michael Bolton, and just before he became very sick, he came to me and he gave me the Michael Bolton CD, and he said to me, ‘Keep it safe for me.’”

“Our favourite song on that CD was ‘When I’m back on my feet again’.”

Gonna break these chains around me
Gonna learn to fly again
May be hard, may be hard, but I’ll do it
When I’m back on my feet again

* Names have been changed to protect the identity of the source and respect the dignity and privacy of the deceased’s family.