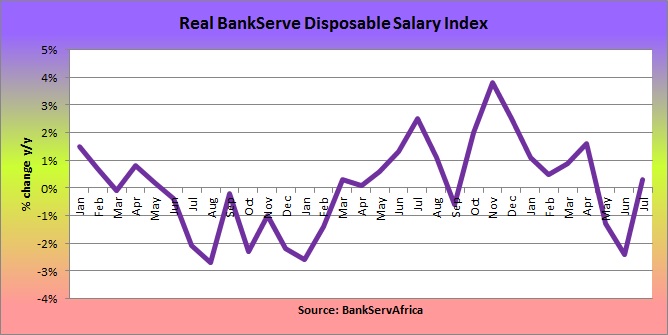 Real disposable income, in other words what you get to take home after tax and inflation, increased by 0.3% year-on-year (y/y)in July after a 2.4% y/y drop in June and a 1.3% y/y decline in May according to data released by economists.co.za. They analyse the information of transfers via the South African payments system and create an index called the BankservAfrica Disposable Salary Index (BDSI) or the Take-home Pay Index.

Mike Schussler from economists.co.za said take-home pay will remain above inflation for a while. These increases should help retail sales recover a little, but could also lead to increased imports, which would put pressure on the current account deficit. Prospects for the second half have been boosted by the above inflation wage increases granted to civil servants that come into effect from July, while the signing of the long delayed power purchase agreements in March between Eskom and the independent power producers will boost fixed investment in the second half of 2018.

Government finances have also improved as in the first quarter of the current fiscal year that started in April, the cumulative fiscal deficit was cut by a quarter from a year ago to R27.6 billion as revenue grew by 9.6% y/y, while expenditure increased by 5.5%.

The Value Added Tax rate was increased from 14% to 15% with effect from April 1 to close the fiscal deficit, and revenue growth from this source has been better than expected suggesting that consumer demand remains strong.