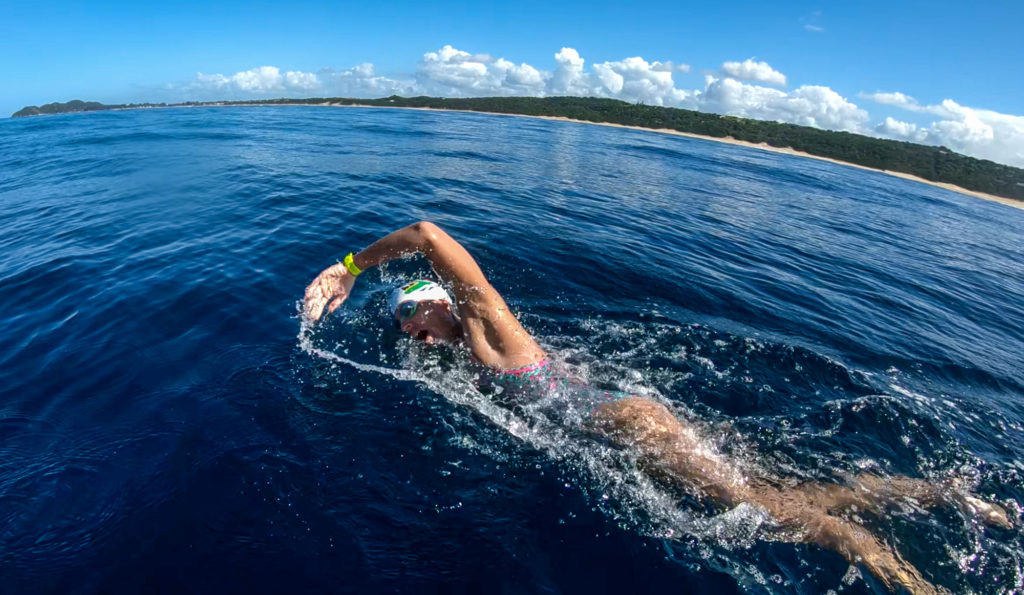 Sarah Ferguson, an ambassador for the SPAR Eastern Cape Stop Plastic campaign, swam 100km in six days on the Elephant Coast in Mozambique and KwaZulu-Natal last month to highlight the threat of plastic pollution. Photo: Supplied

As an ambassador for SPAR Eastern Cape’s Stop Plastic campaign, Ferguson swam 100km over a six-day period, from Ponta Dobela in Mozambique to Sodwana Bay in KwaZulu-Natal last month.

In July, Ferguson linked up with SPAR EC to support them in their Stop Plastic campaign, which was launched in April.

The Eastern Cape retail giant are focused on ending the practice of single-use plastic by encouraging consumers to consider the dangers the material poses to the world and offering them alternative and viable packaging options.

The chief objective of the swim is to create a seven-part documentary series which Ferguson’s environmental movement, Breathe Conservation, is producing to demonstrate the threat of plastic pollution.

During her swim, the Cape Town-based physiotherapist said her intimate encounters with ocean animals had made a lasting impression.

“The sound of humpback whales and the waves pushing me from behind, plus the odd turtle and shark sighting, was enthralling and filled me with such a sense of awe and immense well-being,” said Ferguson.

“Also, being totally exposed to the elements was utterly invigorating and freeing.”

She spoke about the importance of society taking responsibility for the threat posed by plastic.

“The issue of plastic pollution is a global one,” she said. “The marine animals I was privileged to swim amongst are essential for our ecosystem.

“They do not have a voice to speak out on the negative effects of human ignorance and waste and I am choosing to use my voice to advocate on their behalf.

“We are destroying the planet we are called to look after. It is not too late to change but if we do not change our behaviour today, the next generation may not have the privilege of encountering marine life like I have been blessed to encounter.”

She felt the change started with the individual and it was as “simple as refusing a straw”.

“Each choice a consumer makes on a day to day basis has a cumulative effect that over time can make a massive difference. The choice is in your hands.”

She said they had chosen the Elephant Coast to target a local region in raising awareness about the plight of plastic pollution.

“I try to pick areas that have never been swum before and thought the Elephant Coast would be a great challenge.

“It is a marine protected area (MPA) and we felt we would encounter all sorts of wildlife that are being affected by plastic pollution, highlighting the need to protect them.”

She said, despite being an MPA, the Elephant Coast had not escaped being affected by plastic pollution.

“Sadly we saw a lot on the beaches along the Sodwana coastline which is protected by iSimangaliso Wetland Park.

“They were generous in giving us a permit to do the swim to help highlight the good they are doing and the need for further protection. They have staff who clean the beaches daily from all the plastic pollution that washes up on shore.”

Ferguson said she encountered a huge amount of micro plastic on the sea floor, as well as litter on the beaches.

Besides the documentary series for social media, she said she would be talking to various institutions to emphasise the problem.

“I will be doing talks at schools and corporates where I share my experiences of swimming in the ocean.

“We want to drive home the importance of education and behaviour change regarding plastic pollution and eliminating single-use plastic from our daily lives.

“Our motto for Breathe [Conservation] is to live deeply and tread lightly. This is a message I try to live by and encourage others to do the same.”

Ferguson said she was overwhelmed after completing the 100km swim in six days.

“There were massive emotions at the end, knowing that I was swimming for more than myself by taking a stand against a global environmental issue and educating others on how to live a plastic-free life.

“A massive thank you must go to SPAR Eastern Cape for helping to make this happen by sponsoring the trip and for taking a stand against the use of plastic in their stores.”