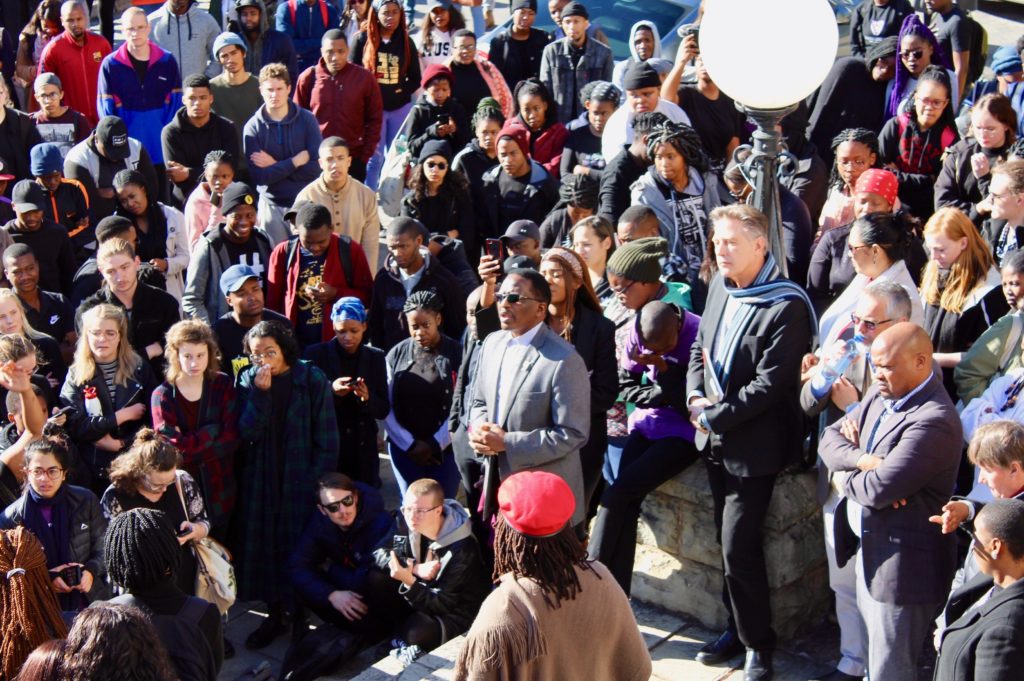 On Monday morning 6 August, Rhodes University students and staff gathered in their numbers outside the Drama Department, otherwise known as Purple Square. This followed a call the previous night by the university’s Student Representative Council (SRC) for an academic shutdown following the tragic death of student Khensani Maseko. Maseko reportedly committed suicide in her Johannesburg home on Friday, 3 August.

Maseko’s death has been linked to an incident in May this year when Maseko was allegedly raped by her boyfriend. Her most recent social media post before her passing read “NO ONE DESERVES TO BE RAPED”, with a photograph of her birth date and subsequent death date. Maseko was a third-year BA student at Rhodes University, as well as a former SRC representative, and an active member of the EFF Student Command. Her death comes during a time of mourning and protest for women across the country during Women’s Month.

“It is with great sadness that we share the news of the tragic passing of one of our students, Khensani Maseko. She passed away at her family home in Johannesburg on Friday afternoon. Ms Maseko was a BA third year student at Rhodes University. Her funeral takes place on 9 August in Johannesburg. As the Rhodes University community, we would like to extend our sincerest condolences to her family, loved ones, and everyone [who]knew her.”

Since 2016, Rhodes University students and staff have remained proactive in their fight against gender-based violence and rape culture on campus. In the aftermath of the harrowing #RUReferenceList protests of 2016, a university task team was formed to combat sexual violence on campus. The team consisted of both students and staff. They compiled formal suggestions for upper management to further consider and implement.

However, today students were questioning when the implementation of these suggestions will happen.

Vice Chancellor Dr Sizwe Mabizela addressed the crowd earlier Monday morning outside the main administration building. “This is a very sad day in the life of the university,” he said. “I have lowered the flag to half mast.” He confirmed that all academic activity was suspended for the day.

“We have taken a decision that we need to mourn the tragedy which has befallen our university.”

Mabizela stated that the University would pursue the thorough investigation of Maseko’s death in tandem with the South African Police Service (SAPS) and the National Prosecuting Authority. He added that a letter of intention to suspend would be issued to Maseko’s alleged perpetrator.

Mabizela, along with other members of upper management, agreed to meet with the SRC and members of the EFF Student Command to discuss further action. The meeting was under way at the time of writing, late Monday morning.

Press were not permitted to attend.

Students and staff were to reconvene at 2pm outside the main administration building.

Following the meeting with management and members of the SRC and EFFSC; Mabizela has stated that the academic programme will remain suspended through Tuesday, 7 August.

Academics will be replaced with a programme of activities surrounding issues of gender-based violence. The sexual assault task team will organise this programme.

Mabizela encouraged all students to participate, or Maseko’s death would be in vain.

“We want to eradicate gender-based violence”, he said.

Mabizela further added that he would report back on the status of the 93 recommendations previously submitted by the task team.

SRC President, Nhlakanipho Mahlangu emphasised to students; “We are not stopping academic activities for the purpose of sitting in our rooms and catching up on series”.

So far, a march to Settlers Monument has been scheduled for 9am, with discussions to follow at 2pm and 6pm. The discussions will take place in the Barrat lecture venue.

“We have been through various experience on this campus, so it will not be compulsory for anyone to attend these talks”, said Mahlangu.