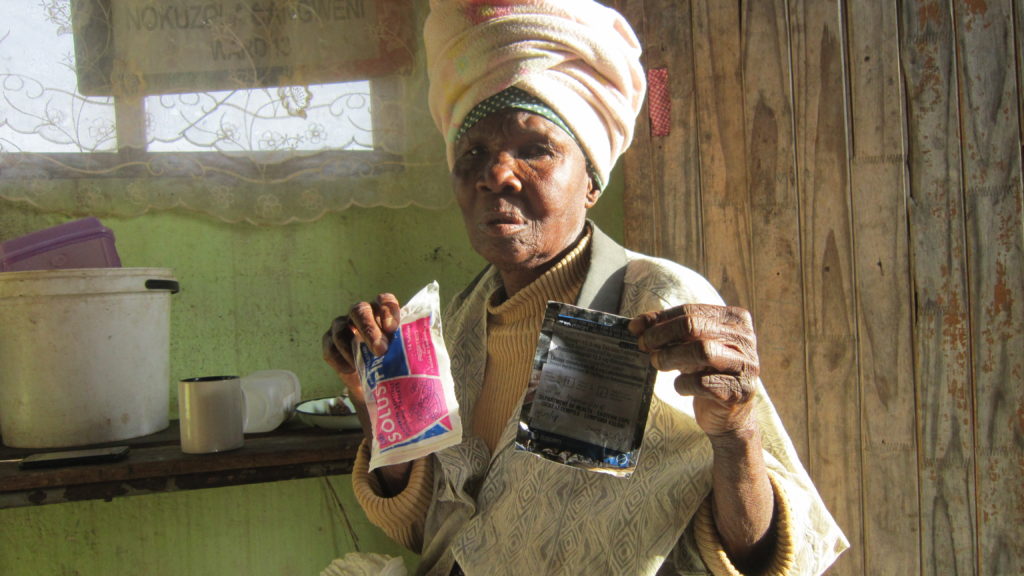 Maggie Dyonashe holding some of her medication that she recieved from the Hospital, tablets

A Grahamstown (Makhanda) woman recently back from two weeks in hospital wants to know who left the bottle of wine under her pillow that nearly killed her and her best friend.

When Nomhle Mlatsha returned home around 10am on Wednesday 11 July after a trip away, she was exhausted and went straight to her bed. Delighted to find a bottle of wine under her pillow, she took it to share with her friend and neighbour, Maggie Dyonashe.

First, she poured a drink for herself, and then one for Dyonashe. Almost as soon as she’d done that, said Mlatsha, she felt like she’d been cut with a razor in her intestines. She started to sweat and had to rush to the toilet.

“She said, ‘Look, I’ve brought something!’ I said, ‘What have you brought for me?’

“She told me it’s wine. I looked at it – and it looked just like wine. She poured me some and I just drank it,” Dyonashe said.

But it tasted funny – “and it smelled like horse wee”.

“What is this thing you’ve given me? This isn’t wine!” Dyonashe had told her friend. “Where did you get this thing?

“She told me she found it under her pillow.”

“Not at home,” Mlatsha told her.

“Who put this thing under your pillow?” Dyonashe asked. She felt like her hair was being pulled off on her head. Then she felt faint and dizzy and collapsed.

While this was happening to her, Mlatsha was also collapsing and she had uncontrollable diarrhoea. They were taken to hospital. Dyonashe was so ill that she was taken by helicopter for emergency treatment in the Provincial Hospital in Port Elizabeth.

The friends were discharged after two weeks. When Grocott’s Mail visited the two families this week, Mlatsha was far better, but Dyonashe was still weak and was feeling unwell. The doctors told them they’d drunk poison – and now Mlatsha wants to know who put it under her pillow.

“I certainly don’t remember buying it,” she said.