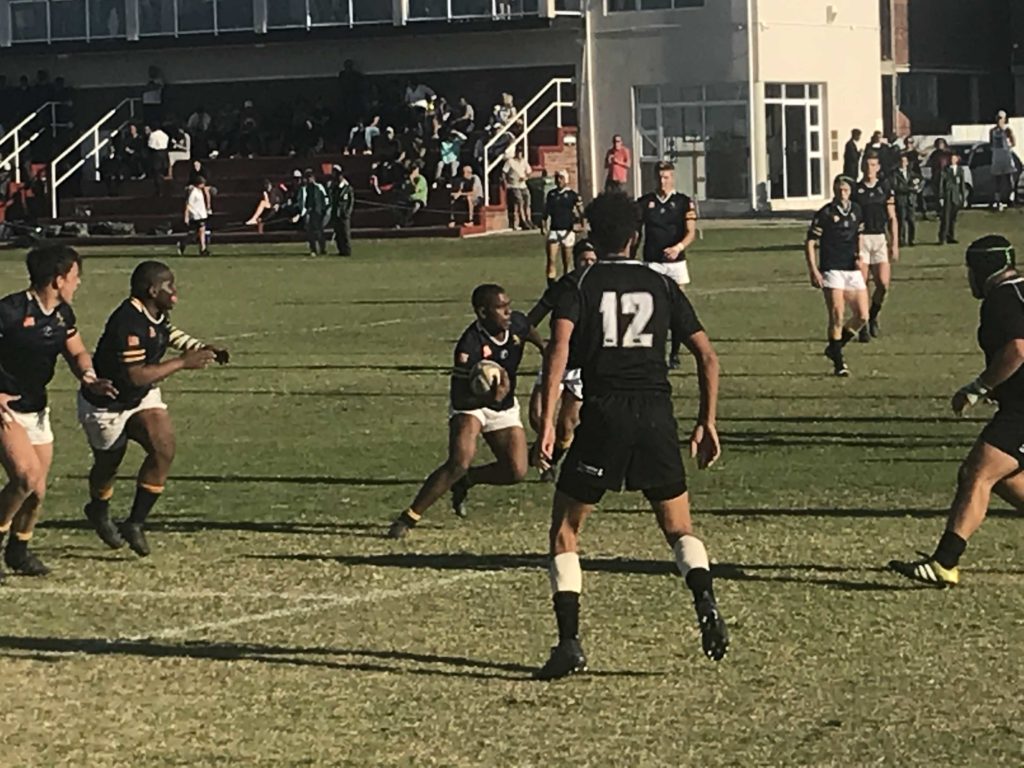 anga Bangisa on the attack for Graeme against Pearson. Photo: Supplied

Graeme College had another successful weekend of sport over the weekend of 20-21 July. The Junior teams hosting Herbert Hurd, Grahamstown Primary and Oatlands, while the Senior teams travelled to Pearson for a tough rugby derby day.

The Graeme Junior School had a great outing against Herbert Hurd, Grahamstown Primary and Oatlands on Saturday. Graeme managed to win all their games against Herbert Hurd, which is always an enjoyable fixture. The highlight of the day went to the U13 A side, who took home a 44-0 victory over their rivals on the day.

The Senior School had a tough rugby day against Pearson where the honours where shared across the board. The Graeme U14 A side ended up with a 10-5 victory, in a very tightly contested fixture. Likewise the Graeme U16 A side had to fight hard to gain their 19-8 win. The Second team put in one of their best performances of the season to edge past Pearson winning 19-12, after defending for most of the game.

In the main rugby match of the weekend, Graeme College’s First team dominated most of the opening exchanges in the first half as they took a 13-0 lead through two tries and a penalty. Liam Agnew scored on the wing after a well-executed backline move. Bongo Adams scored the second try, after a maul from the forwards. Graeme, however, would have expected to come away with more points after all the pressure they had on the Pearson line. Pearson struck back with a try of their own in the closing moments in the first half to make the score13-5 at the break.

The second half seemed more of an even contest, despite Graeme scoring first through Yanga Bangisa to lead 20-5. After the Graeme try, they seemed to lose concentration, which allowed Pearson back into the game. Pearson hit back immediately from the kick off and then scored shortly after that to make the score 20-17. Graeme managed to close out a win after scoring a penalty and defending well for the rest of the match. This meant that the visitors came away with a 23-17 victory.

The Graeme First team hockey side had a flat first half against a skilful Victoria Park side, but managed to score at the very end of the half to go into the break at 1-1. The second half started with Graeme carrying the momentum from the end of the previous half. They dominated the first part of the 2nd half, but Victoria Park scored on the counter attack to take the lead again. Graeme struck back immediately with a well executed penalty corner, to get the score back to level terms at 2-2. Graeme scored three more times in quick succession to take the game completely away from Victoria Park. Victoria Park scored at end of the match, with the final score ending 5-3 in favour of Graeme.

Despite the fantastic performance from the Graeme first team, the remainder of the Graeme sides were unable to pull off a victory. Graeme’s Second team found the day tough, going down 4-1 to Pearson after being 1-1 at half time. The U15 side lost 7-0 to a very strong Pearson U14 A side, while the U13 A side  lost 2-0 to the SAP U13 B side on Friday.