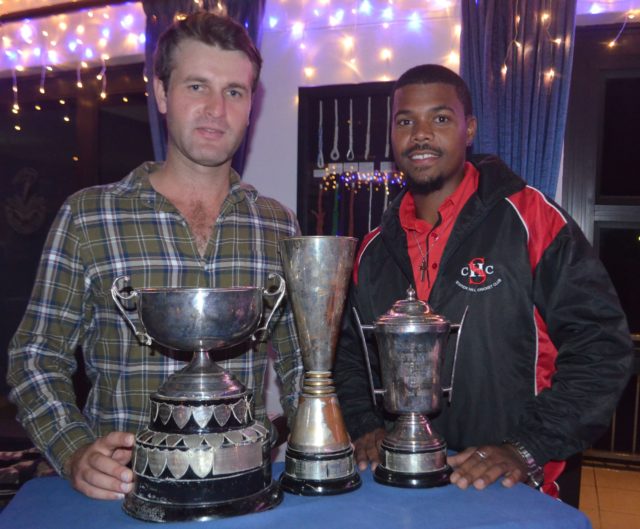 The captains of the First and Second league winning teams, James Stirk (Left) from Southwell, and Cody Jones from Station Hill. Photo: Supplied
At the recent Annual Grahamstown Cricket Board’s (GCB) Awards Ceremony, Southwell First and Station Hill were crowned as First and Second league winners respectively. The Awards Evening took place at the Ski-Boat & River Club in Port Alfred on Friday 25 May.
The Prestigious Awards Evening was well attended by estimated 100 plus guests, which included players, supporters, club officials, GCB officials, former players and former officials of the game.
Adding emotion to the occasion, the Station Hill Cricket Club presented blazers to three veteran players who recently retired – Andy Jones, Wayne Gaseba and Nathan Hilpert. They will stay on in supporting roles at their club and will assist in running the club going forward.
The President of the GCB, Leon Coetzee, delivered the key note address and thanked everyone for their presence and all the individual and league winners. He also thanked all clubs for their commitment for the past season. “We are one of the best, if not the best affiliated club in the EPCB (Eastern Province Cricket Board) and I’m proud to say that cricket is well and alive in the GCB,” said Coetzee.
He added that cricket was not just a battle between bat and ball, but had the inevitable element of a wave of emotion that comes over the players, whether they win or lose. Coetzee then mentioned the need for new umpires and scorers, particularly women, before congratulating the umpires on their good season.
Southwell Cricket Club were honoured for their consistency and were crowned both overall First and Bathurst First league champions. Salem won the Central Albany First league and were also Runner’s Up for the overall First league, which earned them the Club of the Season Award.
Among the individual prize winners, Nicholas Zimmerman (Salem) was the Best Batsman, Francois Van Rooyen (Manleys) the Best All Rounder, Leard King (Salem) the Best Bowler and Brandon Handley (Cuylerville) the Rural Player of the Year.
For the full list of winners, visit: http://www.grocotts.co.za/category/sport/
Previous ArticleRhodes Archers dominate EC Indoor Championships
Next Article Documentary about the next Life Esidimeni to air on eNCA