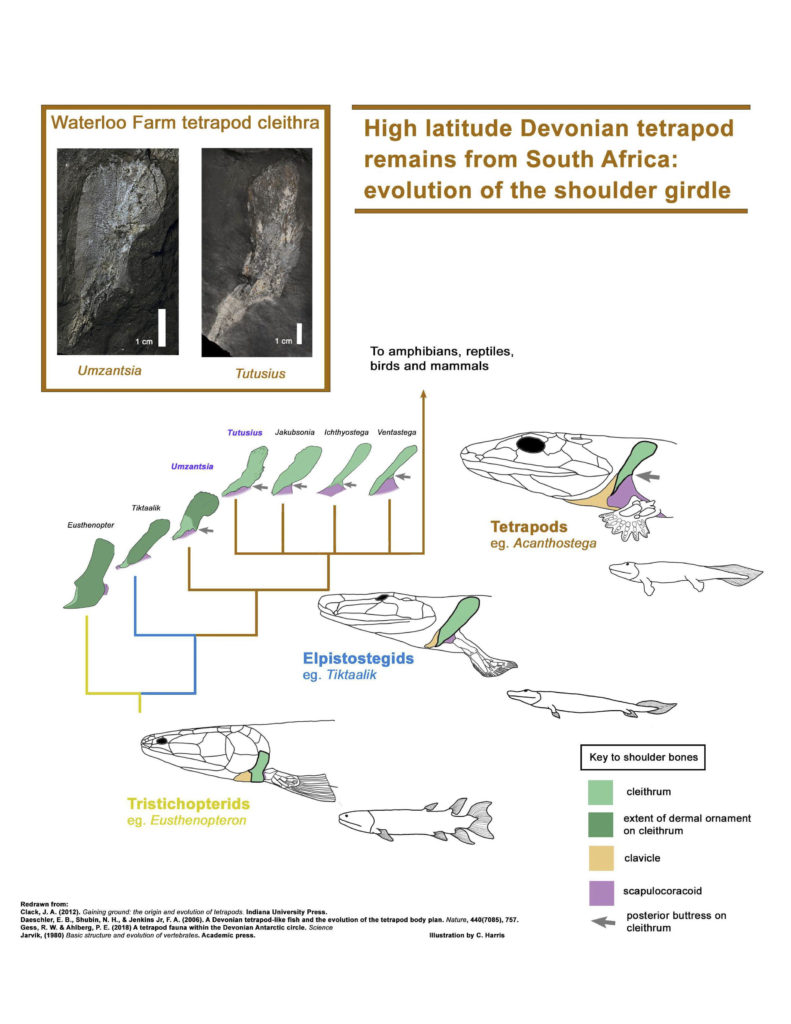 Shale deposits on Waterloo Farm, two kilometres from Grahamstown, have so far produced twenty species, including the tetrapods, which are new to science. Dr Robert Gess believes that this remarkable record represents only about a third of the total number of remains yet to be described.

The Waterloo Farm deposit is an exceptional fossil site which preserves a wide range of fish, plant and invertebrate fossils from 360 million years ago. They are preserved as flattened silvery white impressions in black shale.

Toward the end of the Devonian Period, black gooey mud accumulated in the bottom of a coastal estuarine lake where a swollen river mouth was partially cut off from the sea by a sand bar. Rising sea levels buried the mud under layers of beach sand.

The world was very different when the mud was first deposited – Africa was part of the supercontinent Gondwana (which later broke up to produce Africa, South America, Australia, Antarctica, Madagascar and India).

The southern part of Gondwana wrapped around the South Pole and the estuary where the mud was deposited opened into a small semi enclosed sea – the Agulhas Sea, situated within the Antarctic circle. Although it was at a latitude greater than 70 degrees south, it would not have been as cold as today and plants thrived nearby.

As the original fine black mud was often very low in oxygen, plants and animals rapidly buried in it sometimes left behind impressions of their soft parts. This is extremely rare in the fossil record which normally only preserves bones, teeth and other hard bits.

Over hundreds of millions of years the layers of sand and mud were hardened into rock which was buckled and buried as continents broke apart and mountain ranges folded up.

Eventually the mountains weathered away and the shale at Waterloo Farm was exposed in 1985, when a new road was cut through a hill south of Grahamstown.

The site is unique as it the only significant Late Devonian fossil site from high latitudes. It is also important because of its comprehensive ecological context containing the remains of an entire estuarine ecosystem, from delicate waterweeds and seaweeds to small clams, baby fish and the bones of larger fish. Land plants which grew nearby are also preserved, from the remains of small undergrowth species to fronds from the earliest types of trees.