Still no all-clear on Makana water * 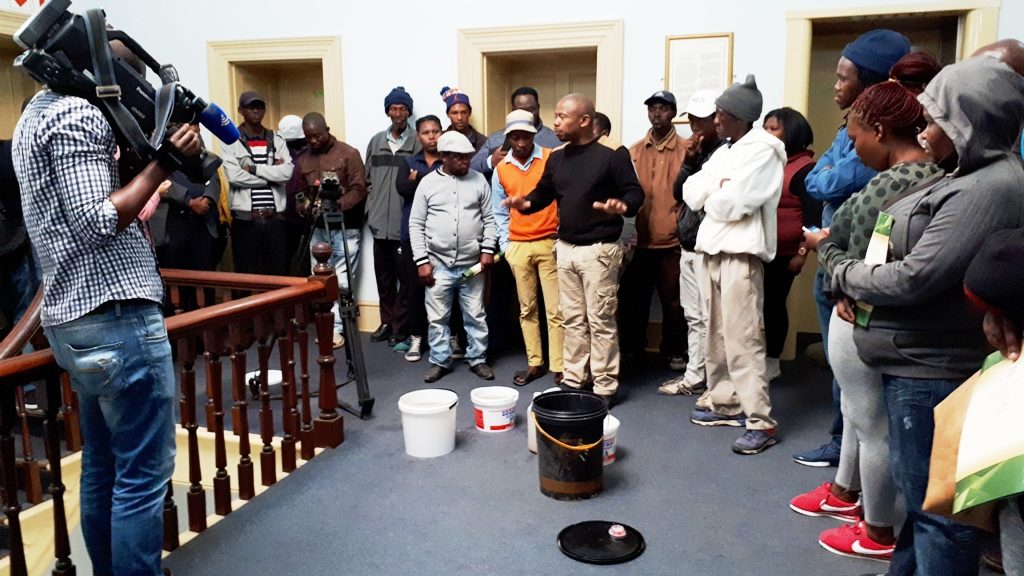 The Unemployed People’s Movement’s Ayanda Kota addresses officials outside the Makana Council Chambers on Thursday 31 May. In front of him are buckets of dirty water, and a pail of sewage. Photos: Sue Maclennan

Makana Municipality on Monday 4 June advised residents to continue boiling water before drinking it. This comes as privately conducted tests on the water at a factory in Grahamstown show that the water at that site is once again safe for drinking, and as testing by the Department of Water and Sanitation is under way in Makana. The news follows weeks of concern about poor water quality, leading to a protest in which angry residents left buckets of dirty water and sewage outside the Makana Council Chamber last Thursday morning.

The results of samples taken at Carara Agro Processing’s Currie Street site were shared on Monday 4 June by managing director Mike Duxbury. The bulk of Carara’s produce is for export and those clients require compliance with high food production safety standards. Because of unreliable municipal water, Duxbury has invested R1.4 million in securing water supply and safety, including in-house filtration and chlorination equipment. All incoming water is treated before it is used in the factory.

This (re)treated water is required by Carara’s overseas clients to be regularly tested by an accredited laboratory. A sample of unretreated tap water in the area, taken on 7 May, was sent to this laboratory. The results were alarming with levels of faecal bacteria well above what is considered safe to drink according to SANS 241. The latest results, on samples taken on 21 and 28 May, show them to be well within the safety limits for potable water according to SANS 241. Both results record no growth of e.coli or coliform bacteria. The latest result records total microbial activity at a quarter of the level considered unsafe.

However, Infrastructure Director Dali Mlenzana told Grocott’s Mail today that advice to boil water remains. Makana issued a notice on 21 May, warning of high e.coli levels in the water and advising residents to boil it before drinking it.

“We will issue another notice when everything is fine,” Mlenzana told Grocott’s Mail today.

Mlenzana did not confirm whether this was due to concern about possible residual untreated water remaining in water infrastructure beyond the water treatment works.

He confirmed that supplies of water-treatment chemicals were in hand.

“The cylinders brought on 24 May will finish soon, but new stock has been delivered,” Mlenzana said.

Deputy Director of Water Services Regulation at the Department of Water and Sanitation, Neville Lawry, today confirmed to Grocott’s Mail that DWS is this week conducting tests on the water at Alicedale, Grahamstown and Riebeeck East. He did not, however, say when the results would be available.

Mlenzana today said Makana had continued to conduct internal tests. While the turbidity would remain for some weeks, “the water meets the critical water quality parameters” he told Grocott’s Mail.

On Thursday (31 May) he told Grocott’s Mail that the results of laboratory tests conducted on samples taken from Makana supplies on Monday 28 May were not yet available.

Recent reports to councillors revealed that independent testing had not been carried out for several months because the laboratory hadn’t been paid.

The Grahamstown Residents Association has reported outages in Hill 60, Cradock Heights, Sunnyside and Somerset Heights since Friday, in addition to continuing outages in Joza. Mlenzana said the municipality had also received reports of outages at PJ Olivier and Oatlands North.

He said there was no problem at the water treatment works or the reservoirs.

“The pumps are working and the reservoirs are full,” Mlenzana said. “We are treating as much water as we usually do at Waainek. Our plumbers are investigating why there is no water in high-lying areas. I can’t say yet if it’s a valve, but there will be a technical solution and it’s unlikely the problem will persist.”

Around 25 members of the Unemployed People’s Movement brought buckets of dirty water collected from taps in various parts of Grahamstown, along with a pail of of raw sewage, into a public consultation meeting hosted by the provincial legislature in the city hall on Thursday morning, 31 May. Chaired by MEC Mpumelelo Saziwa, the gathering was to discuss the new Indigenous Knowledge Bill with Grahamstown citizens.

Surprised Bhisho officials and portfolio committee members, dressed in their traditional best, took out their cellphones and took photos as UPM members addressed them about their grievances.

Ayanda Kota told them the municipality was treating residents with contempt and said that the protest, which they were taking upstairs to the municipal officials, was to assert citizens’ dignity and humanity.

There has been widespread outrage among residents after high e.coli levels were reported in the municipal supply. The results of independent testing of samples from 14 different locations in Grahamstown on 23 May confirmed unsafe levels of bacteria in 10 of them at the time of testing.

The e.coli crisis was highlighted in Council portfolio committees on 16 and 17 May and the municipality on Monday 21 May issued a notice warning residents of the potential health risk, advising that as a precaution, tap water should be boiled before drinking.

Chemicals were finally delivered to Makana’s water treatment works on Thursday 24 May, after a period during which staff had been making do with what they had, putting swimming pool tablets into the water in the absence of chlorine gas and sodium hypochloride.

Other than the UPM members, there did not seem to be any residents among the small group inside the city hall on Thursday morning. Saziwa and his officials listened to the protesters and afterwards addressed them, advising them to send a petition to the provincial legislature.

The UPM group then took their protest upstairs to the Council Chambers, calling for councillors to come and meet them.

“When we take our children to the clinics, they tell us it’s the water,” Mbane said.

Kota said the protest aimed to put a human face to a gross violation of human rights.

He said not only had Makana failed to deliver clean water, but they had failed to tell residents about the problem until several weeks after it surfaced.

“We are raising our hands to assert our humanity,” Kota said. Speaking for the protesters, he called for the Council to be dissolved. “Heads must roll,” Kota said. “Please give us Hawks or SIU because there are councillors who must account for what has happened here.”

Acting Municipal Manager Ted Pillay, who came out of his office to meet the group, explained the background to the current water crisis.

Pillay then called Water and Sanitation Manager Ntombi Tshicilela and Infrastructure and Technical Services Director Dali Mlenzana to explain in detail what was being done to remedy the situation.

Tshicilela explained that the discoloration of the water was turbidity caused by excessive sludge in the settling tanks at the treatment works and did not necessarily mean it was unsafe to drink. She outlined the process under way to remove sludge from the system. Her explanation was repeated in a public notice issued later, which also advised residents to boil drinking water before consumption as a precautionary measure.

Pillay and the officials explained that the James Kleynhans Water treatment Works which serves east Grahamstown has a capacity to deliver 10 megalitres a day, whereas the demand is 13 megalitres. The long-term solution was that the upgrade currently under way would see it have a capacity of 20ML.

Makana’s population is growing, but there is no concomitant investment in infrastructure to match the scale of this growth,” Pillay said.

The immediate answer to their grievances, along with proper treatment and testing, was work to clear the sludge from the tanks. This work had begun that day (Thursday) and would take about two weeks, Tshicilela said.

Pillay agreed with protesters that it wasn’t acceptable for residents to be given substandard water. Along with the remedial action explained by Tshicilela and Mlenzana, he said the water at various locations around Makana would be tested twice weekly.

The protest was disciplined and peaceful and an attempt by one of the protesters to empty the bucket of sewage on the carpet was quickly stopped by UPM leaders.

“I think this building has to open a museum for things like this,” Kota said as the group moved off,leaving the buckets outside the Council Chambers.

THE IMMEDIATE SOLUTION TO THE BROWN WATER Infrastructure Director Dali Mlenzana explained that the reason for the delay was that the sludge could not simply be dumped on site, and its contents had to be analysed before a waste removal company could remove it and dump it at an approved site. Tshicilela confirmed that the company removing the sludge, Gardens and Floors, was starting work that day. Tshicilela, Mlenzana and Pillay on Thursday 31 May explained to protesters that:

On 14 May Makana Communications Officer Yoliswa Ramokolo reported the following on progress with upgrades to James Kleynhans and Waainek water treatment works: THE 2018/19 ANNUAL BUDGET AND MAKANA’S INFRASTRUCTURE

The special council meeting on Wednesday 30 May was to table the Final draft IDP and Budget for the 2018 /19 Financial year.

In her opening speech, the Mayor spoke of the need to focus on basics, including that water quality must be 100% compliant. “We have had problems for the past two months,” she said.

“We are tabling the Budget at a time when the economy is challenged, but we are working to improve the lives of our citizens,” the Mayor said.

A component of the Budget is the Medium Term Revenue and Expenditure Framework. This is aligned to the Integrated Development Plan (IDP) and of the six development priorities for Makana for 2017-2022, Basic service delivery and infrastructure development is listed first.

THREE WATER AND SANITATION PROJECTS will be funded from external grants over the coming three years:

Stepped tariffs are designed to discourage high water useage and for the coming year range from:

Department of Water and Sanitation:
Makana has historic debt for water purchased through James Kleynhans, and has to pay for current water purchases.

The document noted, though, that: