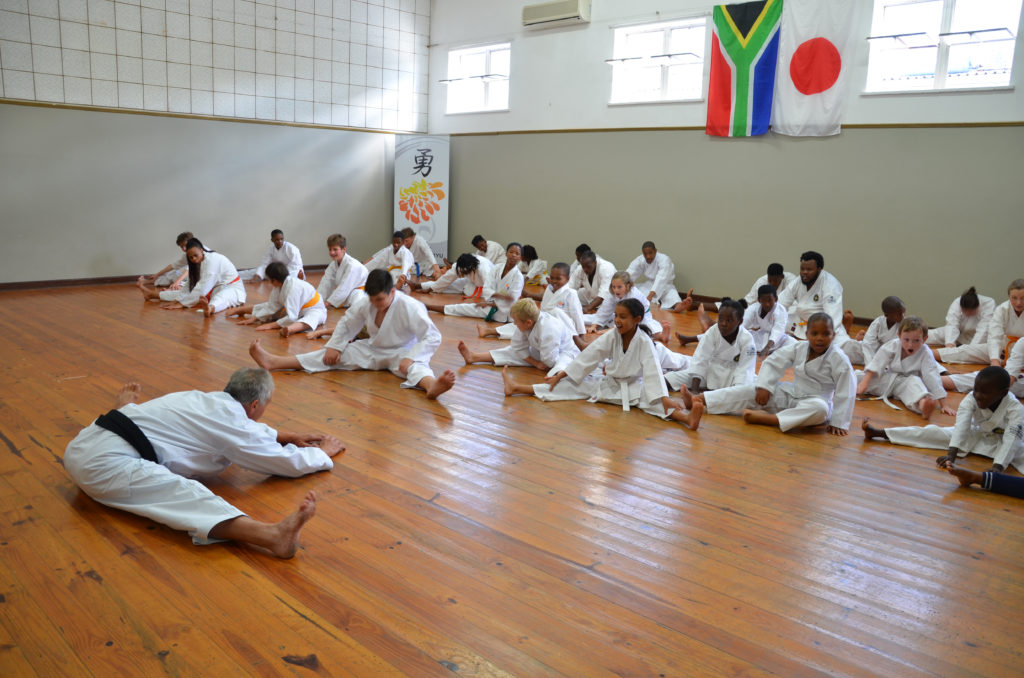 Sensei Dukas leading a stretching session in front of the group of beginner karateka. Photo: Supplied

Sensei Mike Dukas visited Grahamstown over the weekend of 26-27 May, in a demonstration event which was a tremendous success. Sensei Dukas’s friendly and charismatic approach to teaching, together with his impressive technical ability and unrivalled explanations made for an incredible Seminar.

Approximately 70 karateka of all ages ranging from white to black belt attended the training which was held at East Cape Shotokan-Ryu’s Hill Street Dojo on Saturday. Apart from a strong local contingent, a number of senior karateka also travelled from Port Elizabeth and East London in order to attend the Seminar. The following day, Sensei Dukas travelled to Somerset East to present an additional Seminar for United Shotokan- Ryu (USR).

According to local organiser, Gary Grapentin, Sensei Dukas began practicing karate in the late 1960’s in Sasolburg. He later began travelling to Japan in order to seek out greater technical knowledge, as he felt that there was something missing from the way in which karate was practiced in South Africa. With Sensei Dukas’s humble attitude and his lifelong pursuit of technical excellence, he gained the Japanese masters’ respect and trust, and as a result, he was exposed to a high level of training which few westerners are ever able to access. In Grapentin’s opinion, Sensei Dukas is currently one of the most advanced and knowledgeable Shotokan practitioners outside of Japan.

A few years ago, Dukas underwent a full knee-replacement operation, which gave his doctors serious reservations as to his ability to continue practicing karate. However unperturbed, Dukas’ set about devising a rigorous rehabilitation and stretching programme, and through sheer determination, he is today as flexible and supple as ever. This is even more impressive, considering that Dukas is nearly 70 years of age.

Dukas and his wife Marion, recently relocated to the Western Cape, where they are now semi-retired. Dukas is however still the Style-Head for the World Shotokan Karate Federation of South Africa (WSKF SA) and the Vice President of the World Shotokan Karate Federation (WSKF). Apart from conducting seminars around the country, he will also be teaching abroad later this year. Dukas also regularly receives karateka from across the country for private tuition at his home dojo, and when he is not teaching, he also enjoys gardening.

Grapentin hopes to bring Sensei Dukas to Grahamstown on a regular basis, and also looks forward to the prospect of collaborating with him on future projects. For further information about karate training in Grahamstown or Port Alfred, Grapentin may be contacted at garyg@geenet.co.za.