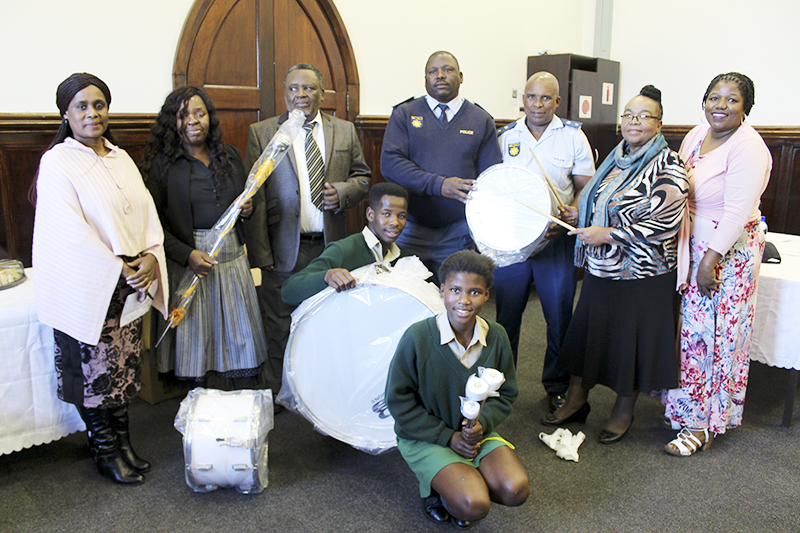 “If we are not safe at schools, it means there is no proper learning and teaching taking place.” Head of the Education Department’s Grahamstown office Ray Ndabeni opened proceedings at the launch of the School Safety Programme in the area, along with the handover of sets of marching drums to six schools.

The six Grahamstown schools have been selected for a pilot programme that aims to bring discipline and positive values to schools with the March and Drill programme, linked with the schools’ physical education and life orientation curricula.

40 boys and girls in grades 7-11 are the pioneers of the programme. They are pupils at Amasango, George Dickerson, Nyaluza, Mary Waters, DD Siwisa and Fikizolo.

Welcoming the schools’ representatives, along with a contingent from the SAPS, Ndabeni said the initiative was “a small contribution to doing away with these dragons that threaten our well-being”. He described a school as “the little window that’s telling us what’s happening in the community”. It was important that schools remain integral to the community, yet separate from it, Ndabeni said. Ndabeni is head of the Grahamstown Cluster Management Centre for the education department’s Sarah Baartman district, whose head office is in Graaff Reinet.

“Schools re not a place for abuse and drugs,” Ndabeni said. “They are a place for learning and teaching. Introducing the police to schools is not to arrest people, but to help us be what we want to be.”

Amasango Career School SGB chairperson Cecil Nonqane had been delegated to speak on behalf of all the schools’ SGBs. He noted how different it was for children to grow up today than in the 60s, 70s and 80s. He specially noted that digital technology had taken the place of social relations.

“Children today spend more time with technology than their parents,” Nonqane said. Everyone needed to step up and take responsibility for a community’s children.

Every child in Grahamstown is my child.

“Every child in Grahamstown is my child,” he said.

Colonel Martins Memani, who presented for SAPS along with Captain Albert Dyani, said, “We will give what we have, but we need your support.”

He explained the point of marching drills.

“Just to listen is a lesson,” Memani said. “When we say left, we don’t expect you to go right, or to go when we say stop.”

Bringing police into everyday life at the schools was a way of changing children’s perception about the police.

“They think a police officer is always there to arrest someone.”

Speaking about the challenge of tackling crime in a population much bigger than the police force, Memani coined the phrase, “each one, police one” – an ironic but entirely intentional echo of the 80s Congress of South African Students slogan, “each one, teach one”.

“When you are happy and secure as a learner, your mind grasps concepts easily,” Memani said. “This is a way of trying to create that security and normalise things.”

“South Africans have a problem with anger: we need to first try to bring peace within ourselves,” Memani said.

Schools within the community

The handover of the marching gear was also the launch of the National School Safety Framework – a comprehensive manual for schools that includes a chapter on the role of the South African Police Service.

School Safety Programme co-ordinator for the Grahamstown office, Ntomboxolo Ntanga, explained how incidents would be recorded to build up a picture of conditions in schools in the Province.

The introduction to the document says the overall aim of the Framework is “To create a safe, violence and threat-free, supportive learning environment for learners, educators, principals, school governing bodies and administration.”

South Africans have a problem with anger: we need to first try to bring peace within ourselves.

A key feature of the framework is that in dealing with safety, it locates the school within the broader community.

It is based on the Hlayiseka School Safety Toolkit developed by the Centre for Justice and Crime Prevention and is a response to “new and emerging” forms of violence within schools. The document notes with concern that: