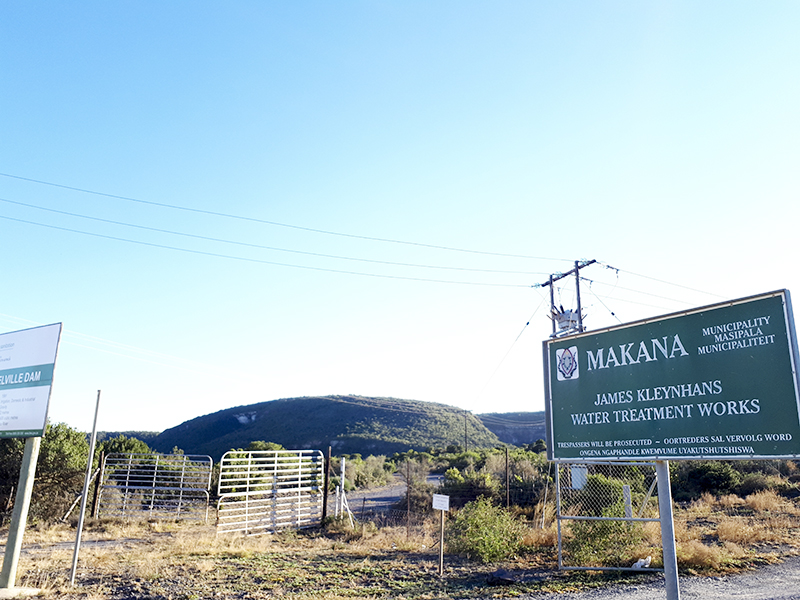 The results of samples taken from sites across Makana on Monday 28 May to test whether Grahamstown’s drinking water is safe again should be available tomorrow, Wednesday 30 May. Acting  municipal manager Ted Pillay, was speaking to Grocott’s Mail three days after essential treatment chemicals were applied to the city’s supplies. He said he was giving the matter serious attention until he was 100 percent satisfied “that everything to do with the water supply in every community is perfect”.

His comments follow widespread outrage as high e.coli levels were reported in the municipal supply and came as the results of independent  testing of samples from 14 different locations in Grahamstown last week have confirmed  unsafe levels of bacteria in 10 of them at the time of testing.

The problem was highlighted in Council portfolio committees on 16 and 17 May  and the municipality on Monday 21 May issued a notice warning residents of the potential health risk, recommending that tap water should be boiled before drinking.

Chemicals were finally delivered to Makana’s water treatment works on Thursday 24 May, after a period during which staff had been making do with what they had, putting swimming pool tablets into the water in the absence of chlorine gas and sodium hypochloride.

Pillay was at pains to point out that inquiries confirmed the officials responsible had ordered the chemicals well in advance.

“The problem was that the supplier wouldn’t do business with Makana unless there was upfront payment,” Pillay explained.

Pillay, who is the municipal manager of the Sarah Baartman District Municipality, seconded to Makana until a permanent municipal manager is appointed, said he’d sent a list to his district officials for the missing chemicals to be obtained.

“On Thursday those chemicals were applied to the water,” Pillay said. “They should have had an effect within 12-24 hours.”

The results of tests taken yesterday would be available tomorrow Pillay said. This was because of the time required for laboratory testing.

In addition, Pillay had requested the Department of Water and Sanitation, as the country’s highest water authority, to visit the Makana water treatment works this week.

“We want them to confirm that everything has been dealt with correctly, and to assist with whatever else needs to be done,” Pillay said. He said water engineers had been requested to inspect the facilities.

“Whether Alicedale, Riebeeck East, Salem or Grahamstown, the matter of providing clean, safe water has my continuous attention,” Pillay said.

Boreholes in Riebeeck East and Sevenfountains were now operational, he said, and officials would soon be visiting Fort Brown to check on the supply there.

Reports to Council have for years included lists of farms and outlying areas to which Makana delivers water “at great cost” Pillay said.

Boreholes in those areas that were now operational would begin to ease some of that expense.

HOW SAFE WAS YOUR WATER?

Preliminary tests by citizen scientists conducted on tap water from sites across Grahamstown last week indicated high levels of unspeficied bacteria in some of the samples.

Test co-ordinator Nikki Köhly, who is Rhodes University’s Safety, Health and Environment Officer, said bacteria of any sort (not just e.coli) reacted with the chemical, causing the liquid to darken. More darkening of the liquid indicated a higher level of bacteria.

The point of the testing, Köhly said, was to indicate whether more detailed laboratory testing should be done.

This was done and the more detailed, costly tests were conducted by researchers in the Environmental Health and Biotechnology Research Group in the Faculty of Pharmacy at Rhodes University.

The samples were collected in sterile conditions by Köhly on 23 May. The results, sent to her on 27 May, were as follows:

The SANS 241 standard for coliforms is <10). For e.coli it is zero. SANS 241:15 is the Drinking Water Standard that lists determinands and corresponding limits that must be measured to determine that the quality of water is safe for people to drink.