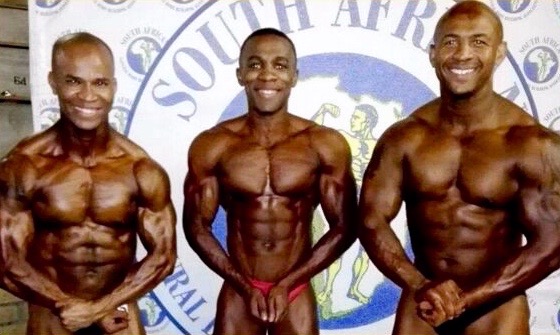 Makana Bodybuilders, * (left), * (middle) and * (right) posing at an event earlier in the season. Photo: Supplied

The Makana Bodybuilding Goldrush Classic will take place on Sunday 27 May, at Recreation Hall in Grahamstown. The event will for the third time, be hosted by the The Makana Natural Bodybuilding Fitness Club.

The 2017 edition due to a lack of funds for prize money and awards. However, with the addition of Goldrush  as a sponsor, the competition is secure for this year. Goldrush will supply medals, trophies and supplements for each of the divisions on the day, as well as advertising.

The day will consist of five different competitive events–junior (between fifteen and twenty-one years old), senior (between bantamweight and heavyweight weight classes), and three different masters classes: master 1 (between forty and fifty years old), master 2 (between fifty and sixty years old), and master 3 (sixty years and older). In addition to the regular five categories, a disabled category as well as a ladies bikini category is expected to be filled by athletes coming to Grahamstown to compete.

For each category, a top three will be awarded based on the judges rulings based on the balance, posing technique and overall shape of the competitors, according to a general checklist. The winners of each category will receive a trophy, a gold medal, a complementary supplement, and a grand prize of R1 000 for each winner.

Ronowyn Uithaler, the Chairperson of the Makana Natural Bodybuilding Fitness club, is expecting around forty athletes to compete in this year’s champs. The expected athletes will come from all over the Eastern Cape, including Dispatch, Port Elizabeth, Jansenville, and East London, with some competitors coming from as far as Cape Town in the Western Cape. Gareth Burger, the Treasurer of the Makana Natural Bodybuilding Fitness club, said, “I think this year we have more local athletes, where as in the past we had more external athletes coming through”.

The day itself will begin at 11:50 on Sunday morning, with registration and weigh-ins taking place at the Recreation Hall, before competition starts in full at 14:00. In between the different category competitions, there will be entertainment and different fun activities taking place, including a dance troupe performing, and a guest show by local bodybuilding celebrity, Lesley Sauls.

Uithaler said, “Thanks to Goldrush for supporting us, and we know that this will be a major event for us. It will be a successful one.”

Entry for the day is set at R20 for adults, and R10 for children (sixteen and below). A tuck shop and lucky draws will also be in operation during the day, to make it a complete family event.