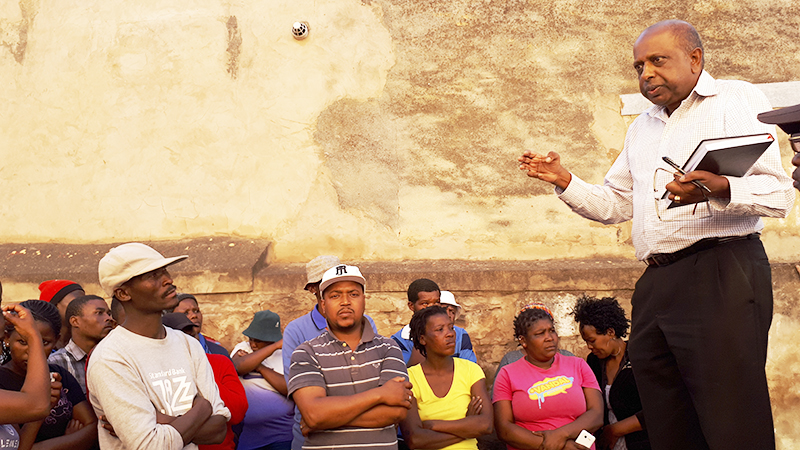 Thursday 19 April, protesters halted Sanral’s roadworks in the city, saying they should resume only after a meeting scheduled with Pillay for 2pm the next day. The protesters’ main concern was the manner in which local people working on the project had been selected.

On Friday, police – including members of the Public Order Police – maintained a presence as UPM protesters toyi-toyied outside the locked gates of the city hall awaiting Pillay’s arrival.

Pillay arrived alone and struggled to raise someone to open the gates. When a nervous security guard eventually arrived, he tried to unlock the padlock, only to break the key in the lock.

Impatient, the group asked Pillay to instead accompany them to the former Masifunde offices in Beaufort Street, where UPM activist Gladys Mphepho, as well as Ayanda Kota spoke before Pillay was asked to speak and listen to the protesters’ concerns.

Pillay explained his role as acting municipal manager brought in to turn around management and service delivery in Makana.

He gave a brief outline of the major projects to improve infrastructure and service delivery of which he is currently at the helm, namely the upgrade of sewage works and water supply systems in and around Grahamstown, as well as the city’s badly potholed roads.

He vowed to report back to the group the next day with accurate information about how people were employed on the Beaufort Street upgrade project.

Speaking to Grocott’s Mail yesterday Kota said the UPM had agreed to suspend the protest on the basis that Pillay had shown himself prepared to engage.

“He has an open-door policy, and has made it clear that he is serious about improving the city’s infrastructure. Good roads are crucial for businesses to function properly in Grahamstown. These in turn provide employment opportunities.”

However, the UPM was determined that councillors should feel the heat when it came to job selection.

“Our councillors have a very narrow vision,” Kota said. “They are so consumed by patronage and corruption that they can’t see the bigger picture.”

“The biggest problem in Grahamstown is unemployment,” Gqasana told Grocott’s Mail at the site of the protest on Thursday. “Councillors and the ward committees don’t involve the entire community when it comes to selecting people for jobs on projects. Instead they employ their relatives, friends and girlfriends. That’s why the same people get employed on projects every time.”

Most of the the protesters, he said, came from Ward 7 (Extension 7, Extension 6, 25 Size, Lingelighle and Ethembeni). However, he said protesters had also come from wards 2, 7, 9 and 10.

The road-repair project is the outcome of the Mayor’s August 2016 request to the South African national Road Agency for assistance in repairing the badly potholed 9km section of road.