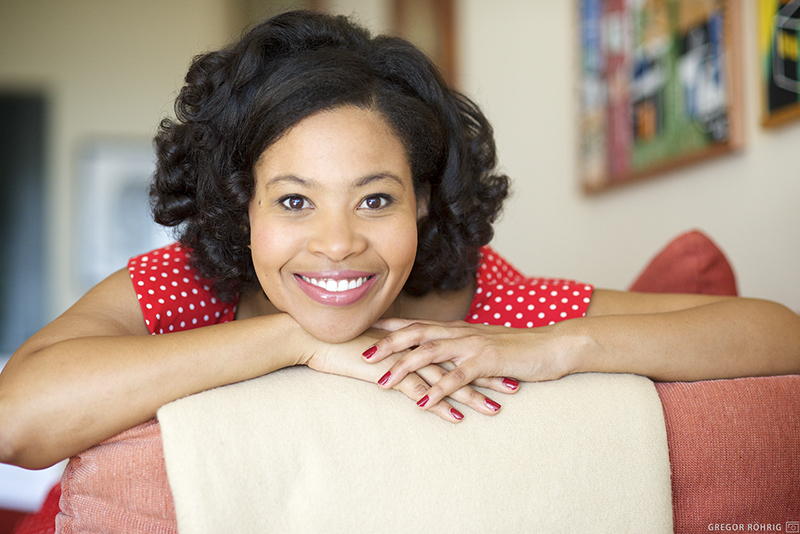 Soprano Golda Schultz will perform in Grahamstown on 13 April. The Rhodes Graduate, who has established herself as an international opera star, will also conduct a masterclass for young singers.

Schultz has performed in the Metropolitan Opera house in New York, the Bayerische Staatsoper in Munich, Carnegie Hall in New York and Wigmore Hall in London.

She will also be give a masterclasses on Saturday 14 April from 10am to 4.30pm in the Beethoven Room at Rhodes University’s Department of Music and Musicology. Rhodes University voice students will participate and non-students are invited to enrol. Non-Rhodes students will pay a fee of R50. If any singer would like to enrol for the masterclass, they should contact Voice lecturer, Jo-Nette Le Kay at 076 523 6464. Please indicate if you need an accompanist.

Schultz will perform in the Rhodes Theatre at 7.30pm on Friday 13 April 2018. She will be accompanied by Kurt Haupt, from Cape Town. Bookings with Denetha Peters at 046 603 8490 or email music@ru.ac.za

“Fast-rising South African soprano, Golda Schultz “(The Times )was a journalism major at Rhodes University in Grahamstown, South Africa when she took her first music elective, leading her to Kiri Te Kanawa’s recording of Die Fledermaus. Inspired, Schultz began singing Mozart works, continuing on to a graduate degree in music at the University of Cape Town followed by studies at The Juilliard School. In 2011, Schultz flew to Munich to audition for the Young Artist Program at Bayerische Staatsoper, where they offered her a two-year position on the spot. Schultz then joined the ensemble of Stadttheater Klagenfurt for one season, where she earned considerable attention in new productions of both Der Rosenkavalier (Sophie) and Giulio Cesare (Cleopatra).

London’s The Guardian claims,“It’s hard to imagine a finer soprano singing.” Schultz made her Metropolitan Opera debut in the 2017-18 season as Pamina in Die Zauberflöte, under the baton of Maestro James Levine. Her 2017-2018 season included lead roles at the Bayerische Staatsoper in productions of Carmen (Micaëla), La bohème (Musetta), Das Rheingold (Freia), Cosi fan tutte (Fiordiligi), and Parsifal (Klingsors Zaubermädchen); performances at the German Aids Foundation’ s Opera Gala and Wiener Konzerthaus Gala; a debut at the New National Theatre Tokyo in Der Rosenkavalier (Sophie); performances of Haydn’s iconic The Seasons with The Cleveland Orchestra in Cleveland and at Carnegie Hall in New York; and an engagement with Opernhaus Zürich as the lead role of The Widow in Mendelssohn’s Elias.

In the 2016-2017 season, Schultz made her house and role debut at Teatro alla Scala as Susanna (Le nozze di Figaro) under Franz Welser-Möst, returned to the Salzburger Festspiele for her first Vitellia (La clemenza di Tito) under Teodor Currentzis in a new production by Peter Sellars, and continued as a member of the Bayerische Staatsoper ensemble with roles including Pamina (Die Zauberflöte) and Liu (Turandot).

Schultz also made a number of exciting concert debuts, including with the Iceland National Symphony Orchestra in Mahler’s Symphony No.2 under Christoph Eschenbach, with Gewandhausorchester Leipzig in Tippett’s A Child of Our Time under Stefan Asbury, and with the Finnish Radio Symphony Orchestra in a program of Mozart concert arias.

A natural concert performer, Schultz has also enjoyed recent debuts with the Iceland Symphony Orchestra in Strauss’s Brentano Lieder under Andrew Litton and at the Rheingau Musik Festival in Mendelssohn’s A Midsummer Night’s Dream as well as with The Deutsche Kammerphilharmonie Bremen on tour with Paavo Järvi to Japan in Beethoven’s Fidelio, and at Musikfestival Heidelberger Frühling with Mirga Gražinytė-Tyla in Beethoven’s Ah! Perfido.

Previous Article1, 2, 3 ways to retain rain water
Next Article Know your rights when a loved one dies