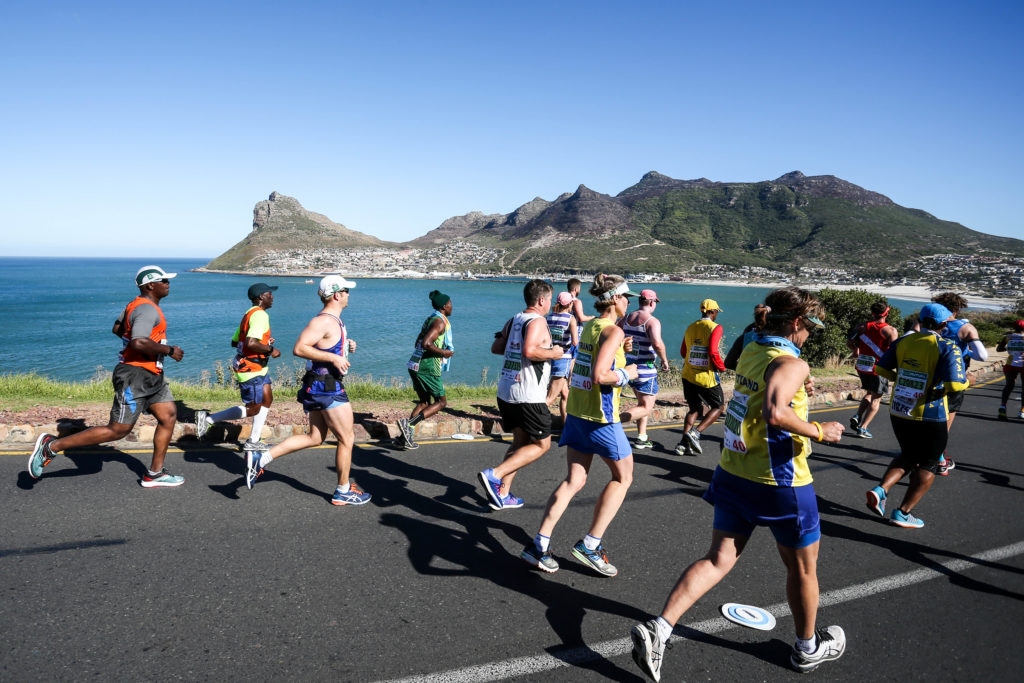 While Cape Town is gearing up for a busy Easter holiday season, the organisers of the Old Mutual Two Oceans Marathon have confirmed that they are ready for the 49thedition of the world’s most beautiful marathon, scheduled to take place on 31 March 2018.

“We are once again looking forward to welcoming the sold-out field of 27 000 participants in the Ultra and Half Marathons next Saturday,” said Carol Vosloo, General Manager of the Two Oceans Marathon NPC.

“In addition, we anticipate hosting around 5 000 additional runners across our other events on Good Friday. The popular 12km and 24km OMTOM Trail Runs will see 1 000 runners conquering the slopes of Table Mountain and Newlands Forest, while runners of all ages, shapes, sizes and fitness levels will participate in our four Fun Runs.

Meanwhile, our international participants will congregate at the V&A Waterfront to celebrate the #RunAsOne spirit as they participate in the 5.6km International Friendship Run.”

Big Names
The OMTOM Ultra Marathon will see a strong women’s field battling it out for the top spot next weekend. Caroline Wöstmann is back from injury and feeling confident that she will make a triumphant return. Jenna Challenor and Tanith Maxwell, who came 2nd and 3rd respectively in 2017, will also be back. Other exciting additions to the line-up include Dominika Stelmach from Poland (2017 Wings for Life World Run Winner), USA runner Lindsey Scherf (indoor marathon world record holder) and SA’s Gerda Steyn, who is looking for a top 3 position.

“The Old Mutual Two Oceans Marathon’s R1-million prize bonus for the man or woman who breaks the course record is always a big drawcard, and this year will be no different,” added Vosloo.

For the second year running, the event will deploy its #GOGREEN waste management and anti-littering campaign, in collaboration with Old Mutual and Wildlands. This includes a zero-tolerance stance on littering along the route, and converting non-organic waste collected during Race Week into school desks.

Tackling The Water Crisis Challenge
Organising the 2018 edition of the Old Mutual Two Oceans Marathon had its own unique set of challenges in the face of the severe drought and resultant water crisis in Cape Town and the Western Cape.

“Taking the lead from the City and Province’s consistent messaging that Cape Town remains open for business, while remaining cognisant of the fact that the event makes a significant contribution to the Mother City in terms of job creation and charitable fundraising, with an overall economic impact of at least R675-million, there was no doubt that the show had to go on,” said Vosloo.

“We spent a considerable amount of time finding alternative solutions to have zero impact on the City’s municipal water supply.”

Through a comprehensive action plan and implementing a range of water-saving and alternative water-sourcing initiatives, the event is essentially off the grid. No municipal water will be used at any of the OMTOM events, and water for Race Day has been sourced from the Newlands Spring with an allocated and approved dispensation from relevant stakeholders, including the Department of Water and Sanitation.

In addition to the existing refreshment stations along the route, the Ultra Marathon will also have a number of hydration pack refill stations for self-sufficient athletes running with hydration packs.

Shower facilities have been removed from the finish line, and taps and fixed showers at UCT will not be accessible. Chemical toilets will use recycled water only.

Countdown To Race Day
Race Week kicks off on 28 March 2018, when the Old Mutual Two Oceans Marathon Expo opens its doors at the Cape Town International Convention Centre at 10h00. The Expo showcases the latest in sport and healthy lifestyle trends and will be open on Wednesday, 28 March and Thursday, 29 March from 10h00 to 19h00, and Friday, 30 March from 9h00 until 17h00.

Approximately 50 000 visitors walk through the OMTOM Expo’s doors over the course of three days every year. This is the only place where participants in the various OMTOM events can collect their race numbers.

Expo visitors will also have the opportunity to listen to expert advice and meet some high-profile runners and OMTOM legends at the Old Mutual Theatre of Advice supported by the Sport Science Institute of South Africa (SSISA).

The event will be broadcast live on SABC 2 from 05h30.