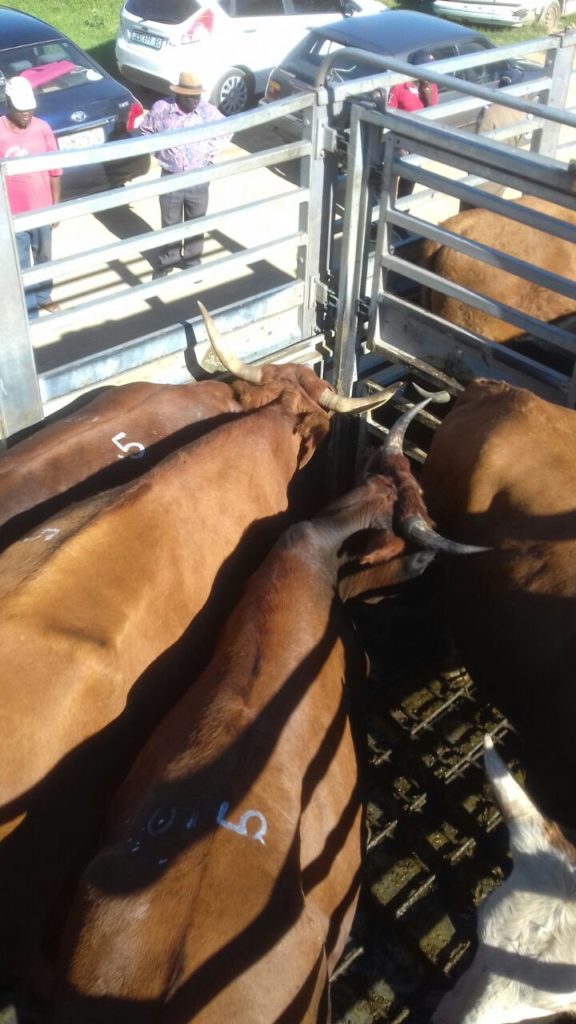 The officer, a constable in the child protection unit, stopped the truck as well as the bakkie escorting it. The bakkie driver was the buyer of the stolen cattle.

“Members of the Grahamstown Stock Theft Unit were alerted and responded,” Thonjeni said. “Thirteen cattle were recovered, of which nine have already been positively identified.”

Four men and a woman aged between 37 and 57, who sold the cattle, have been arrested. They face 13 counts of stock theft and will appear in the Peddie Magistrate’s Court later this week.

Grahamstown Cluster Commander Brigadier David Kanuka said, “We have had several cases of stock theft reported. The suspects will face additional charges as our investigators probe this recovery further.”

Meanwhile, as part of its continuing compliance operations, the stock theft unit yesterday also issued a fine of R5000 in terms of the Branding Act. This was for a farmer’s failure to tattoo* 122 sheep.

“Our operations focusing on stock theft are intensifying,” Thonjeni said. “We are appealing to the community to report stock theft and stock owners to take responsibility and brand their stock. This assists the investigators to know who the stock belongs to when we have recoveries of this nature.”

* Correction: We earlier incorrectly described this as branding. According to Farmer’s Weekly, there are two types of marks: a tattoo, which must not be bigger than 20mm at the widest and highest part, and a brand, which must be between 40mm and 100mm at the widest and highest part. Cattle must be marked by the age of six months (tattooed from one month or branded at six months). The tattoo must be applied in the left or right ear; the brand can be applied on any clearly visible part, except the neck. Goats, sheep and pigs must be tattooed at the age of one month in the left or right ear.