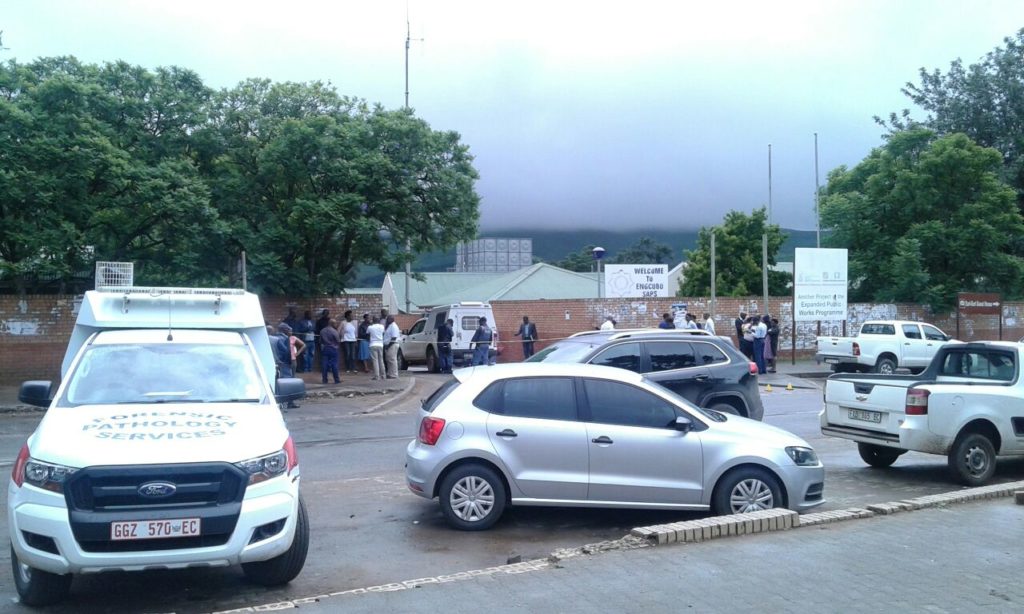 Armed robbers killed five police officers and a member of the public and took 10 firearms and a policevan at Ngcobo Police Station between Queenstown and Mthatha this morning. Photo supplied

The National Commissioner of the South African Police Service, General Khehla John Sitole,has strongly condemned the attack on the Ngcobo Police Station between Umtata and Queenstown in the Eastern Cape. He has deployed a task team comprising experienced detectives of the South African Police Service and the Directorate for Priority Crime Investigation.

Spokesperson for the National Commissioner Brigadier Vishnu Naidoo said an unknown group of armed suspects entered the police station in the early hours of this morning and without warning, randomly opened fire on the members on duty. Three members were killed instantly in the Community Service Centre, Naidoo said. An off duty soldier was also shot dead as the suspects were fleeing.

The suspects made off with a police van taking two other members.

“The bodies of both these members with gunshot wounds were later found along the roadside, six kilometres from the police station,” Naidoo said. “According to preliminary investigations, it appears that members were shot execution style.”

The National Commissioner condemned the attack as callous and cold-blooded.

“I am appalled and deeply saddened by the cold and callous attack on our colleagues this morning,” said Sitole. “I have activated a task team comprising of experienced detectives of the South African Police Service and the Directorate for Priority Crime Investigation to investigate this attack.”

This team would be supported by specialised medium to high risk teams with the added support of the Airwing. “We will not rest until we have tracked down these heartless killers and bring them to book,” Sitole said.

The National Commissioner has also called upon the community to assist with any information that could help identify and bring these perpetrators to book as this is a heartless attack on the State.

“While the motive for this attack is not clear yet we have established that the suspects have a robbed an ATM a short distance away from the police station, stolen 10 firearms as well as a police van from the station,” Naidoo said.

Information can be communicated to the SAPS Crime Stop number 086 00 10111. Callers may remain anonymous and all information will be treated in the strictest of confidence.