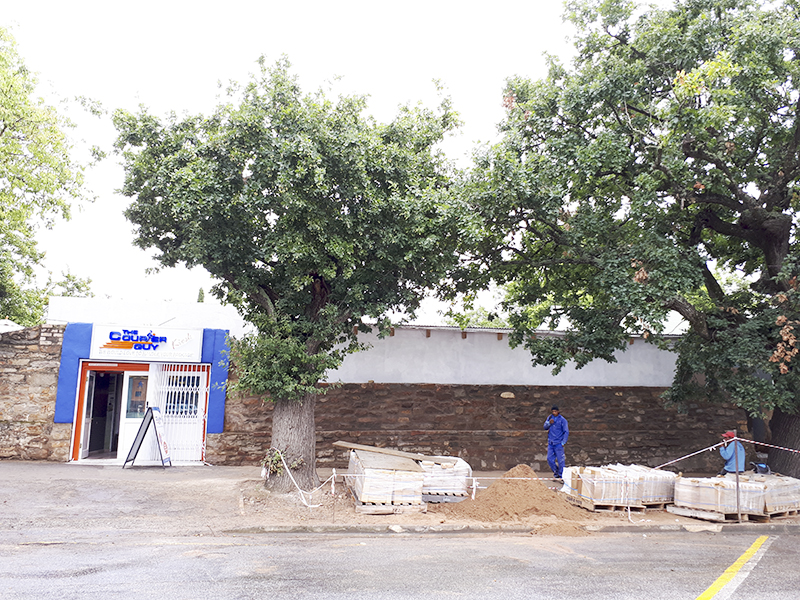 A historic wall broken and providing access for the construction of a new business complex at 38 Somerset Street (corner of High Street) has been rebuilt. Photo: Sue Maclennan

The owners of 38 Somerset Street, where the collapse of an old stone wall during the construction of a new business centre sparked outrage among some residents, say they are acutely aware of the history of the building. They say that rebuilding using the original stone was planned from the inception of the project. However, municipal officials say no permission was given to break the wall, and no occupation certificate for the premises would be given until it was restored.

The wall was rebuilt this week and the owners have expressed the hope that the public sees they’ve done the best they could, under the circumstances, to remain true to the historic property. In a letter which will be published in full in Grocott’s Mail this week (and is included below), the company, Friedshelf 1612 (Pty) Ltd, says they took over the derelict 38 Somerset Street premises three years ago.

“The property houses eight businesses with approximately 15 employees between them,” spokesperson Simon Roberts wrote. “The site has always been a double plot with little development on the second half. After three years, funds have been accumulated to carry out the rest of the vision focusing on the secluded garden at the back. Another four businesses including a beauty salon, clothing shop, houseware and eatery will be added providing another 12-14 direct jobs.”

“However, the other piece of wall that adjoins 137 High Street had several issues: firstly, it was in a very bad state of repair, being upheld by the rough hedge, which when removed for building, resulted in parts of the wall collapsing. Secondly, the wall is not original as evidenced by the brick used in parts of its construction,” Roberts said.

“Nevertheless, the rock material of the wall was meticulously kept and cleaned at extra cost to be used in rebuilding the wall, which was planned from the inception and started long before any issue was raised.”

Along with the owners of the building and the contractor, Grocott’s Mail spoke to Makana’s Town Planner and Building Control Officer, a historian and the councillor for the area, to establish what went wrong and what should have happened.

“The law is clear and the processes are there for us to follow. Project managers should submit all the information to the relevant authorities, so they can make an informed decision about heritage structures: whether they can or can’t be altered, and in what way it can be done.”

Permission for alterations to a structure older than 60 years is through the Eastern Cape Provincial Heritage Authority through Act 25 of 1999 – the “Heritage Act”, Meaton explained.

Building Control Officer Gcobisa Mfeti said the owners hadn’t sought permission to break down the wall. According to the plans that were approved, the access should be where a courier business is currently operating.

“They are supposed to apply to [Makana’s] Aesthetics Committee about that wall – they weren’t supposed to break it. We served them a notice that we won’t issue an occupation certificate before they restore that wall to what it was before,” Mfeti said. “Also, it’s on the agenda for our next Aesthetics portfolio committee meeting, so we’ll get other recommendations from there.”

The advice of Meaton and Mfete to anyone who wants to develop, especially in the conservation area (the historical centre of Grahamstown as defined by Makana’s Local Economic Directorate), is to go to the Town Planning or Building offices (next to the Joza Youth Hub in Joza) and find out whether the property falls under ECPRA.

“If it’s in the conservation area, it must come to the Aesthetics Committee,” Meaton said.

“Visit us,” Meaton said. “If you ask for information about the site, we will do as much as possible to assist. If you want to do alterations, we will check in the original building plans if there are any issues, as well as the Radford Report.”

Denis Radford was an architect who did expert assessments on the historic value of Grahamstown buildings that are now used as an official reference.

Makana’s Ward 8 Councillor Brian Jackson, however, is not as conciliatory.

In a written response to questions from Grocott’s Mail, Jackson said he was drafting a formal motion of question to Council.

“The situation regarding heritage conservation in Grahamstown is alarming. This is supposed to be one of the iconic heritage towns in the country and yet the heritage of our town is under assault as never before.

“The destruction of the High Street wall is symptomatic of what is happening throughout the town. Alterations that to the old MacDonald street cottages have desecrated that terrace. There are other examples going on throughout the town that would take up a page of Grocott’s.

“Were any of these alterations permitted by either the Municipality of the Eastern Cape Heritage Resources Agency (ECPRHA)?

“Your guess is as good as mine. Certainly none of those alterations appeared before the Aesthetics Committee of the Municipality  which is the body that is supposed to oversee applications to alter heritage structures, especially within the so called ‘conservation area’.”

Fleur Way-Jones, Curator Emeritus at the Albany History Museum said according to her research, the stone wall was added sometime between 1837 and the 1900s. She said no one could dispute that 38 Somerset Street Erven 3739, 3740 & 3741 was one of the oldest properties in Grahamstown.

Below follows her written response to questions from Grocott’s Mail: One of the oldest properties in Grahamstown

No one can dispute that this is one of the oldest properties in Grahamstown. Retief owned Erf 33 in 1820 but Pohl probably built the Georgian house in the 1830s.

Sketches and paintings often assist historians. In the 1823 watercolour by an unknown artist there is only the garden wall at the top of High Street.

Young WG Atherstone sketched upper High Street in 1830 but a line of trees on the north side obscured the side of the house and the boundary; similarly the side was obscured in HW Piers’ 1840 watercolour and Thomas Baines’ oil painting of High Street on a Sunday morning in 1849 showed only a wooden fence lower down the street and behind trees.

Advertisements provide useful descriptions. In the Graham’s Town Journal of March and November 1837 “extensive premises for sale” were advertised*. Besides the double storey house, “a stable for 6 horses, kitchen and Servant’s Room and a spacious Yard enclosed with a brick wall” were advertised for sale.

Photographs are accurate records.  In the photograph of soldiers guarding the Drostdy Arch during the South African War, there is a wall adjoining the Lieutenant Governor’s house at 38 Somerset Street.

In 1983 Patricia Scott, Albany Museum historian, wrote a description for a National Monuments report which included “a large partly stone walled garden behind the house.”

In conclusion, the stone wall was added sometime between 1837 and 1900s.

From the 1990s tourists on the walking tour, “Saints, Sinners and Students” past the wall’s rather buckled exterior, tourists would say, “Look at the Old Wall!”

What more is needed: Geological evidence? Or Masonry skills?

In Britain stone walls are valued; The Stone Wall Trust even offers building courses.  With the original High Street wall demolished, there is no second chance of dating the wall. And by the way, the new stone wall is crooked!

Below is the full written response to Grocott’s Mail from the building’s owners, Friedshelf 1612 (Pty) Ltd: You kindly brought to our attention in your previous edition, a level of concern around the reconstruction at the corner of 38 Somerset Street and High Street. This relates to part of the external wall on the High Street perimeter. Here is the background and details of the efforts being carried out by the owners, Friedshelf 1612 (Pty) Ltd in this regard.

As readers will recall, the property on the corner of 38 Somerset Street and High Street had fallen on hard times and had become derelict and in dire need of care up until 3 years ago. Friedshelf 1612 (Pty) Ltd is a small group of locals with a long track record of investing in Makana, Ndlambe and the Eastern Cape, and its owners couldn’t bear to see this iconic piece of history at such a prominent point in our town dilapidate any further.

And so, it was acquired at the end of 2014, and restored into the hub of activity it is today. The property houses 8 businesses with approximately 15 employees between them. The site has always been a double plot with little development on the second half. After 3 years, funds have been accumulated to carry out the rest of the vision focusing on the secluded garden at the back. Another 4 businesses including a beauty salon, clothing shop, houseware and eatery will be added providing another 12 – 14 direct jobs.

The owners are acutely aware of the history of the building especially the small piece of wall adjoining the original building, still intact with its original tethering loop. However, the other piece of wall that adjoins 137 High Street had several issues: firstly, it was in a very bad state of repair, being upheld by the rough hedge, which when removed for building, resulted in parts of the wall collapsing. Secondly, the wall is not original as evidenced by the brick used in parts of its construction.

Nevertheless, the rock material of the wall was meticulously kept and cleaned at extra cost to be used in rebuilding the wall, which was planned from the inception and started long before any issue was raised.

We hope that readers will see that what we have done is the best we could have, in the circumstances, to remain true to this beautiful historical property. Our efforts, along with others like Makana Revive who we support, are directed at keeping the character and heritage of our wonderful city alive.

A reviewed policy on building control and signs was submitted to the Local Economic Development Portfolio Committee meeting in the Council Chambers on Tuesday. Included are draft policies on:
* How to apply to display signage
* The size, placement qand design of various kinds of signage including billboards, flat or wall signs, under-awning signs, logos, franchise or agency sign, pole mounted signs and pavement pole signs.

Regulations proposed deal with aspects such as fonts that may be used, colours, illumination and the inclusion of telephone numbers.

Be sure to subscribe FOR FREE to Grocott’s Direct and be first to hear about the decisions and machinations of your councillors! Go to our home page www.grocotts.co.za and click on the box on the right-hand-side that says ‘SIGN UP FOR OUR NEWSLETTER’. Get the news first plus fantastic special offers.