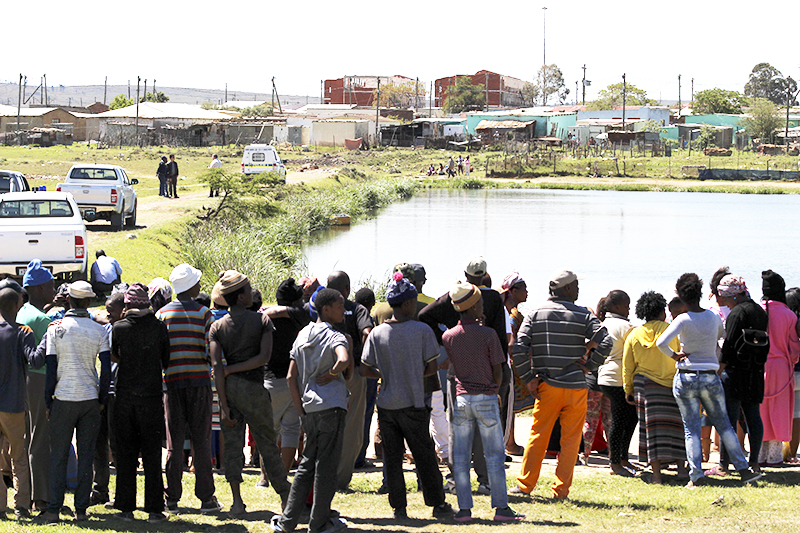 A crowd gathers at Zion Dam in Extension 6 on Wednesday 5 October 2016 while police wait for divers to arrive. Siviwe Gqotholo, who this week pleaded guilty to acting in common purpose in causing the death of torture victim Thembelani Qwakanisa, said in his statement he had seen a lot of people gathered at the dam and had been told a body had been found there. Not long after, he was arrested. Photo: Sue Maclennan

The evidence of all but one of four men accused of the murder of Grahamstown man Thembelani Qwakanisa has been heard, as Judge Thembekile Malusi heard the case in the High Court in Grahamstown last week.

In December 2017, Thembani Onceya represented by attorney Henry Charles of Legal Aid SA, Akhona Onceya (Viwe Mqeke from Mqeke Attorneys), Simamkele Theron Onceya (advocate Charles Stamper) and Mzwanele Degree Maki (advocate Jock McConnachie) all pleaded not guilty in the High Court in Grahamstown to murdering Qwakanisa, 29, whose body was found lying in Zion Dam in Extension 6 in tied in a carpet and a blanket on 5 October 2016.

Maki, a farmworker, aged 26, pleaded guilty of assault with intent to do grievous bodily harm. It is not known whether he plans to testify when the case resumes next week.

In September 2017 a fifth accused, Siviwe Gqotholo pleaded guilty and in October was sentenced to 18 years imprisonment by Judge John Smith.
According to the State’s indictment in the trial of the remaining four, Qwakanisa had been suspected by the men of stealing a laptop belonging to Thembani. A post-mortem report from Dr Stuart Dwyer earlier in the trial set out details of the torture endured by Qwakanisa before his death, which experts described as the cruellest and most brutal assault on a person they’d ever seen evidence of.

Last week, during questioning by McConnachie, it emerged that Thembani passed his third year of study at Rhodes University last year, having been given the opportunity to write his exams. Thembani’s evidence is that he was not aware of the assault.

In questioning by Senior State Advocate Heinz Obermeyer, it emerged that Thembani had used the laptop at the centre of the case for his studies and also to write a book about Grahamstown poets.

The case is set down to resume on Monday, pending the availability of Stamper who is representing a client in another matter.