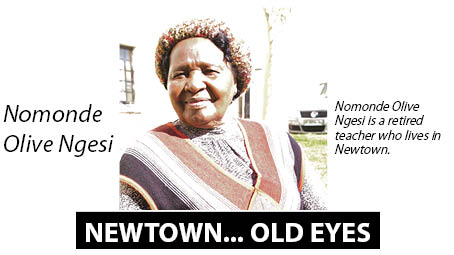 Compliments of the Season to the Newtown…Old Eyes Readers.

I had an amazing one myself with members of my extended family here with me.

We celebrated the wedding of a grandson; and the return from circumcision school of his cousin. The Department of Health’s interventions have helped with families seemingly conducting procedures as expected, and Ingcibi (surgeons) and all staff involved doing a good job. I have not heard of any circumcision-related deaths so far.

When my family returned to their different homes, I remained “home alone” in some kind of retreat, switched to o peaceful mode, although I had to keep active to avoid boredom. I for example counted vehicles driving along the N2 to East London for the ANC celebrations.

I also dug into my storeroom and found lots of left-over paint and wanted to fix my walls. I mixed black enamel with white and produced grey – which reminded me of all the black and the whites we experience in our lives and tend to accept because we are aware of the fact that life is not a bed of roses.

This availed me time for reflection and introspection. It is the greys that make us angry with God because we sometimes question his presence in our lives and forget that he himself walked the complicated grey. Kindly read Luke 22:42; Mark 4:39-40 and Psalm 62:8.

“He is a wise and kind God. He declares, ‘For I know the plans I have for you; plans to prosper you and not to harm you, plans to give you hope and a future.’ Jeremiah 29:11

One of my greys

When the Guptas landed at the Waterkloof Army Base en route to Sun City to celebrate the wedding of one of their sons – a lavish layout with an all-white staff in attendance – South Africa never dreamed she would be swimming in all sorts of scandals in 2018.

The Honourable Dr Jacob Zuma first would not accept responsibility, because he had nothing to do with aircraft that landed on Waterkloof Army Base; there were ministries designated to attend to all that stuff. And now?

Strange how I seem to have predicted in one of my articles entitled “What is politics?” that Cyril Ramophosa would retrieve South Africa from this quagmire.

Also reminds me of a book I read when I was doing Grade 7 in 1945: “The Story of Ali Baba and the Forty Thieves”.

Ali Baba hears the robbers planning to hide their loot – bags of gold – in a secret cave just below the tree in which he was hiding. They have to use a secret code, “Open Sesame”, and when they do the cave opensd up and they can safely store their loot.

As soon as they leave Ali Baba uses the same code. A long story, but Ali Baba, who was a poor man, helps himself to the gold and becomes the richest man in his village.

But Ramophosa’s finances are solid, he knows all the secret codes of his party and he also knows the “Forty Thieves” – so he does not need to be an Ali Baba. He just has to watch the Treasury and change the Cabinet, staring with the present Minister of Finance who appears to feature in the Corruption Scandals of Eskom and was appointed by JayZee.

I have re-read Frank Chikane’s book Eight days in September and am comparing ex-President Thabo Mbeki’s and JZ’s responses when Mbeki was recalled.

What goes around comes around. I think he’d be wise to not read the State of the Nations address when it is due. Ramophosa is a real gentleman and seems to be doing his best to save JZ from embarrassment.

Read my next article end February. Am now assisting my Grade 5 granddaughter to cover her books – quite a task – and my poor 85-year-old back is aching.