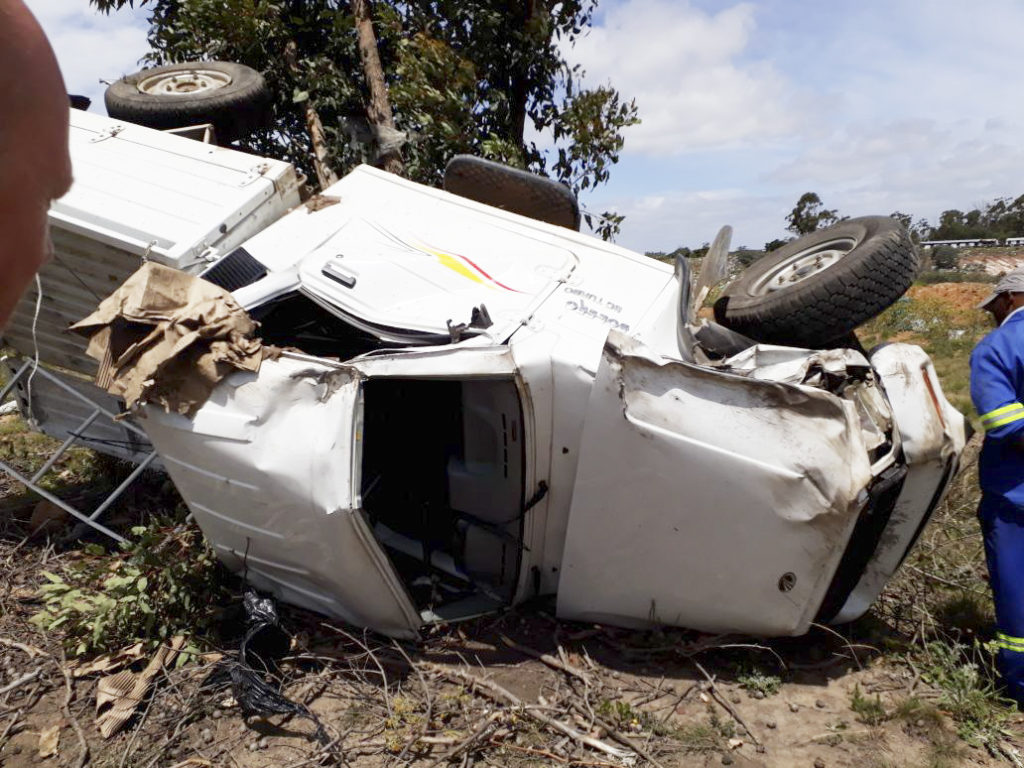 Mvuyisi Platyi believes he was lucky to escape with his life after rubbish blowing on to his windsreen obscured his vision and hhis vehicle rolled, pinning him underneath. Photo supplied

Mvuyisi ‘Vicki’ Platyi believes he was lucky to escape with his life after rubbish blowing on to his windscreen on a windy day obscured his vision and he swerved, lost control of the vehicle and it overturned. His employers and the owners of the vehicle say the rubbish that blows from the dump is not only unhealthy for the environment and unsightly, but has proved dangerous, and that the municipality should act urgently to remedy the mess.

The incident occurred as Platyi, who was returning from a delivery for Fusion Speciality Food Shop to a game lodge west of Grahamstown, was driving past the Makana municipal landfill site towards the town. It was around 1pm on Friday 5 January and the wind was blowing strongly, Platyi recalls.

“I was close to the dump when something – I don’t know what it was, it could have been paper, or cardboard or a big plastic bag – but something came up very fast, straight on to the windscreen,” Platyi told Grocott’s Mail.

Weather records for that day (timeanddate.com) indicate that the wind was blowing in a 25km/h south-south-westerly direction, in other words directly across the road, from the dump towards the aerodrome.

“I swerved left off the road, then tried to return to the road, but the car swerved again.”

Terrified the bakkie would plunge down the steep drop into the dump, Platyi instead struck a tree. The vehicle rolled, pinning his arm underneath.

“I was stuck under there for 10 minutes, watching my arm swell,” Platyi said.

Someone stopped to help and tried unsuccessfully to free him. It was only when another vehicle was flagged down that several people were able to lift the bakkie off his arm.

Platyi was lucky to escape with only bruising and scratches, but it could have been much worse – and the vehicle, an 11-month-old Mahindra Bolero, with the shop’s branding on it, is a write-off.

That dumpsite – that rubbish blowing across the road – it will create more accidents,” Platyi said.

Fusion Speciality Food Shop owners Clint Welgemoed and Virginia David-Engelbrecht said the situation at the dump had got beyond serious. They’re grateful Platyi escaped with minor injuries, but it could have been much worse.

“It’s not just the pollution at the dump that’s a problem,” Welgemoed said. “It could cost lives. Something needs to be done.”

“The Municipality is aware of the litter that is blown out during windy conditions. There is a challenge when it comes to covering domestic refuse with soil on a daily basis,” Makana communications officer Anele Mjekula replied on behalf of the municipality. “The litter outside the landfill site will be cleaned and the situation monitored.”

“[We] have never found conditions so bad as for it to pose a hazard to traffic. I am sure that if a plastic bag is very big it could cause a fright,” Hanekom said.

Management of the R350 falls under the Eastern Cape Department of Roads and Public Works. However, spokesperson Mpumzi Zuzile said litter blowing across the road fell outside their area of responsibility.

“If there were a problem with the road itself, we could respond,” Zuzile said. “But this is an issue Makana is responsible for and needs to deal with.”

Zuzile cited the case of Berlin, east of King William’s Town, where a road that fell under the control of the Department passed the landfill site. The dump was often burning, Zuzile said, with a lot of smoke and there were frequent accidents on that stretch of road.

“There again, it is the responsibility of the municipality,” he said.