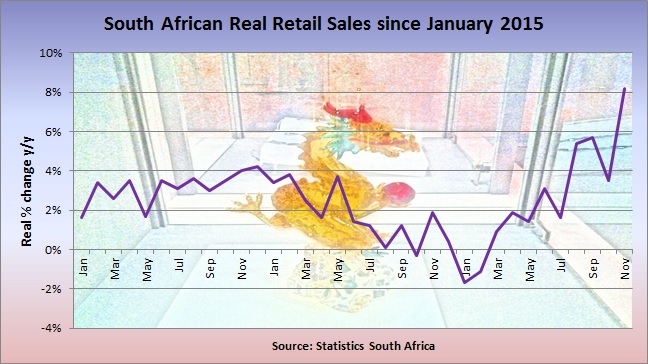 In another sign of the recovery in the South African economy, real retail sales soared by 8.2% year-on-year (y/y) in November after a revised 3.5% (3.2%) y/y gain in October according to Statistics South Africa (Stats SA).

This was double the expected 4.1% y/y increase and the highest y/y increase since June 2012. It shows that the economy is doing far better than economists and ratings agencies expected, although anybody observing the frenzy at some of Grahamstown’s shops on Black Friday would not have been surprised by the blow-out increase. It seems as if almost every data release since August has exceeded the consensus forecast.

“The sheer size and value of the transactions processed during Black Friday, and the growth experienced on 2016’s figures, reflects the success of this annual shopper’s day,” said Chris Hamilton, CEO of BankservAfrica.

In terms of retail segments, “all other” retailers, which includes online retailers, had the highest y/y increase at 20.8%, followed by retailers in household furniture, appliances and equipment at 14.1% and retailers in textiles, clothing, footwear and leather goods at 12.4%.