Only mad dogs and GRA protesters… 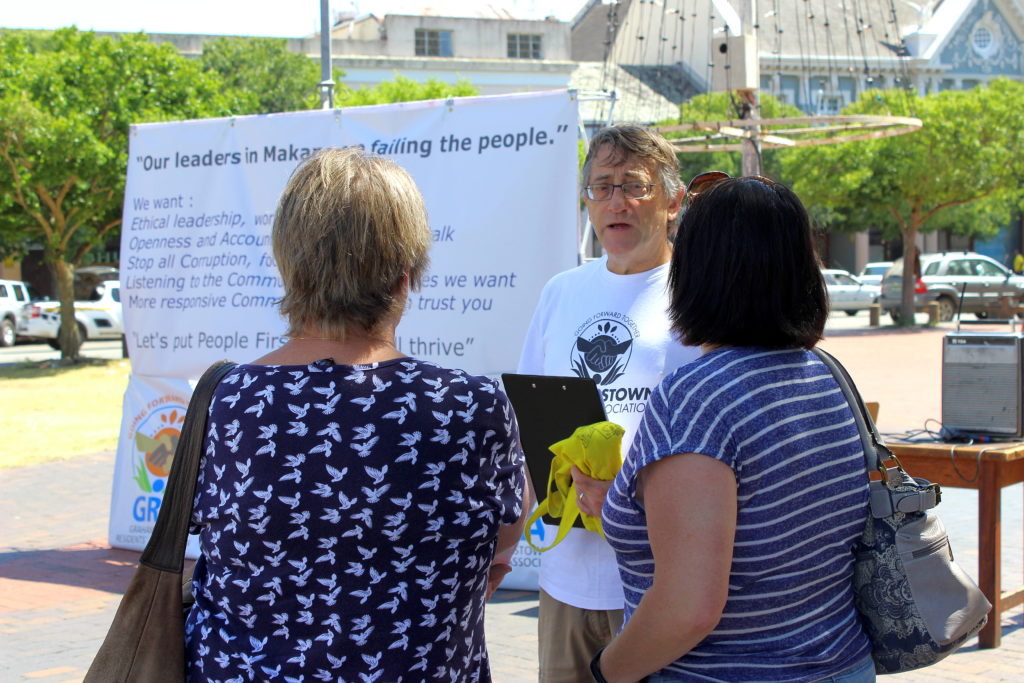 “We’re gonna put fire under their bums”, said Ron Weissenberg, Chairman of the Concerned Citizens Committee to Save Makana, CCCSM. Addressing a protest meeting of about 200 people in Church Square on Thursday, Weissenberg said it was very hot but that it was going to get even hotter for Mayor Nomhle Gaga and the Makana Municipal leadership.

The Grahamstown Residents Association, GRA, called the meeting out of concern for the lack of leadership at Makana Municipality. It says this situation is costing jobs, causing danger and health hazards as well as damaging the environment.

Weissenberg said the Mayor thinks she is playing a game, so he illustrated his dissatisfaction with Makana by using soccer metaphors.

He accused the Police Minister Fikile Mbalula of holding up the deployment of sixty police officers for Grahamstown. He said the local police force was short on personnel making crime control more of a challenge than it needs to be.

For this infringement, Mbalula deserves a yellow card. Weissenberg then waved a yellow card to the delight of the protesters.

He then went on to say that for her mismanagement of the municipality, Mayor Gaga deserved a red card. He then waved a red card to cheers from the spectators.

He made it exceedingly clear that he wanted her out of office as he led the crowd of about 200 residents to chants of “out, out, out… hamba, hamba… out, out”.

Philip Mechanick, chairperson of the GRA, reminded protesters that Grahamstown has many advantages, “yet this city is going backwards”. He said that the municipality is facing many problems but the financial situation is most serious because its debt is growing.

Makana started 2018 more than R170 Million in debt compared to R86 Million a year ago.

Mechanick said, “We’ve got to get the financial mess sorted out”.

He told the crowd that the GRA and the Concerned Citizens Committee to Save Makana, CCCSM, had tried to work with the Mayor and her Council to hire a specialist turn-around person who could fill the Municipal Manager post and straighten out the finances and organisational systems.

It appears that such a person in KwaZulu Natal had been identified and, after lengthy negotiations, was due to take office towards the end of last year.

Mayor Gaga stopped the process when she said that the Sarah Baartman District Municipality would second their Manager, Ted Pillay to Makana for three months. This prospect was welcomed because Pillay has a good reputation as an efficient manager.

CCCSM and the GRA conditionally agreed to drops their calls for full administration.

However, Pillay had not agreed to the move, nor had he been approached for agreement and Sarah Baartman District Council agendas show that the issue of secondment had not been considered. Gaga’s announcement appears to have been a stalling tactic aimed at blocking the hiring of a specialist.

Throughout the protest, Doyle held up held a handwritten poster declaring that our beautiful city has been neglected by the so-called leaders who should therefore be replaced.

Miranda Scott a resident of Brookshaw home said she would like to meet with the Mayor to ask her if she has ever walked the streets of Grahamstown. Scott said that only by walking the streets of the municipality would Mayor Nomhle Gaga see for herself how bad the streets really are.

The protesters were hot and sweaty even as they stood under the shade of a tree, but there was no mistaking their attitude – they were fed up and wanted to do something about the way this municipality is run.