Top five for Ntsika in Matric 2017 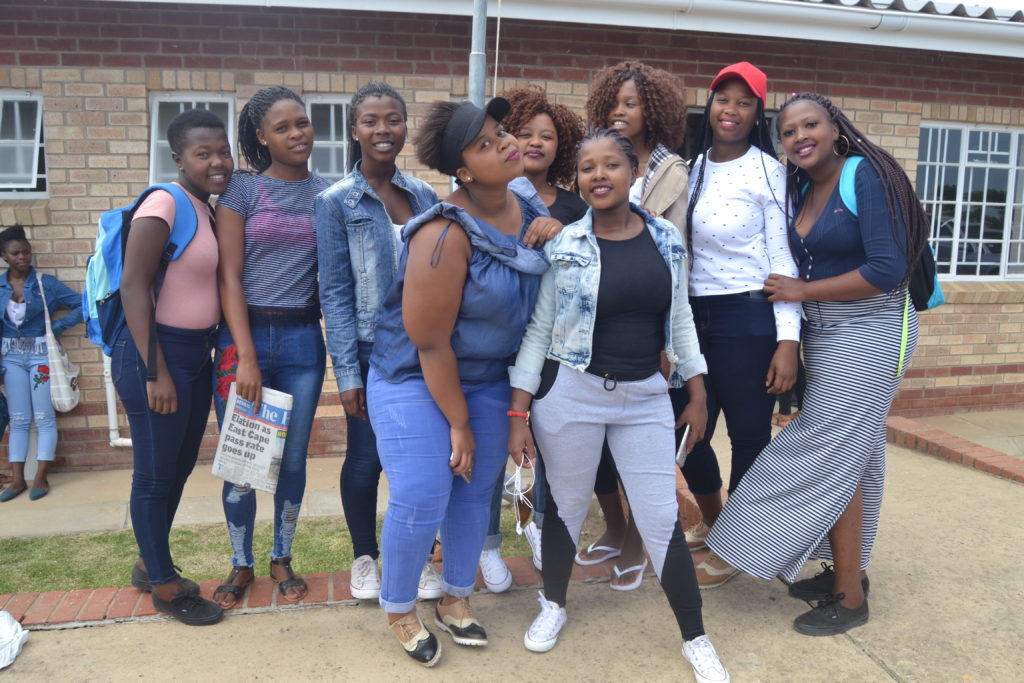 Ntsika Secondary School is among the Grahamstown District’s top five performing schools in the 2017 Matric exams. With its 2017 pass rate of 85.33% the school, which the Eastern Cape Education Department classifies as a Historically Disadvantaged Institution (HDI), saw a slight drop from its pass rate in 2016, along a trajectory from its 2012 low of 28.85%. Ntsika’s Aphelele Jezi was named the District’s top HDI learner. Inga Mpepanduku, of Port Alfred High, achieved the top Matric marks in the education department’s Grahamstown District in 2017.

Hot on Ntsika’s heels in the HDI category are Hendrik Kanise Combined School in Alicedale at 83.33%, confirmation the school is on a steady path upwards, and Nombulelo which saw a phenomenal 25% increase from 2016 to an 82% pass in 2017.

Victoria Girls’ High School retained the 100% pass that has become their consistent standard since 2004 and at 98.3%, Graeme College narrowly missed the full house they reached last year. Hoërskool PJ Olivier had a 10.73% improvement with a 92.3% tally. Completing the top five were Port Alfred High (87.67%) and Ntsika. Gadra Matric School achieved a 100% pass and were the biggest producer of Bachelor passes in Grahamstown.

Principal of Hendrik Kanise Combined said the Alicedale school had enjoyed valuable partnerships with Gadra Education and a fully equipped and maintained computer lab with internet connectivity, provided by Sifunda Kunye. These, along with afternoon and weekend classes as part of a targeted intervention strategy were they key to the school’s continued improvement, he said.

“We are absolutely delighted with this group of matrics who have worked so hard to achieve these results,” Hayes said. “I am so grateful to the teachers who put in extra hours from February to support our Grade 12s – Miss Phumla Quntu in particular has been an incredibly dedicated grade head overseeing afternoon and holiday classes – and the invaluable support from Gadra Education and Rhodes.”

Hayes was particularly thrilled by the quality of pass of many of the school’s top candidates. “With a 34% BA pass and and 44% diploma pass we know that many of our learners will be able to go on to tertiary studies,” Hayes said. “We are on the right track!

VGHS head Warren Schmidt thanked the school’s staff for ensuring a 100% pass rate for the 14th year in a row. An impressive 94.4% of symbols were above 50% in 2017 and 95% of the school’s learners attained a Bachelor’s Pass. The remaining four are Diploma passes. Six of the school’s matriculants achieved A Aggregates, with a total of 115 subject As.

Graeme College Principal Kevin Watson said he was relatively pleased with the school’s results which had been in line with expectations.

Of the 59 pupils who wrote, one needs to write a single supplementary exam to achieve a pass. Watson said the fact that the bulk of the school’s subject offerings are academic rather than practical means the 100% pass rate they achieved in 2016, and aimed for in 2017, wasn’t a given.

Among the school’s top achievers were Julian Gardner and Asher Pearse, who each received six distinctions. Buntu Dyira, Kabir Sonne and Oyisa Katshaza all received four distinctions each.

Hoërskool PJ Olivier Principal Joubert Retief thanked the parents who had supported their children throughout their school years, saying, “I’m happy with the 2017 results. The staff and learners worked hard and reaped the benefits of their efforts.”

Of 26 learners in the Grade 12 class of Hoërskool PJ Olivier in 2017, 24 were successful. Of those, 17 achieved a Bachelor pass – an increase of 28.9% over last year’s result. Five achieved a Diploma pass and two passed with a Higher Certificate. The school’s top achiever was Vanray Nel with a 74% aggregate.

“The increase in the bachelor pass rate creates more opportunities for more learners to empower themselves by further studies at tertiary level. I’m sad for the two learners who were unsuccessful but am comforted that they qualified for the Supplementary Examination. We will assist them in their efforts to pass,” Retief said.

“The great news, though, is that we had more Bachelor passes this year,” Coetzee said. “Of 106 full-time learners, 16 achieved a Bachelor’s pass.” Coetzee said the school had been hampered by shortages of Maths and English teachers.

Disappointingly, Khutliso Daniels Secondary School halved its 2016 pass rate of 50% to 25%, putting it on the Eastern Cape Department of Education’s official list of the five worst-performing schools in the District. Eight pupils passed – two receiving Diplomas and six Higher Certificates.

A total of 24 Khutliso Daniels learners will need to rewrite Matric – a statistic that Principal Radio Mcuba found a bitter pill to swallow. He puts it down to a lack of motivation among the 2017 group and a lack of interest among the progressed learners.

But Mcuba believes the tide will turn this year.  “I have a feeling that this year’s Grade 12s are going to do wonders,” Mcuba said. “This class has been showing interest since Grade 10.”

“This also means that Gadra, which caters largely for disadvantaged students, is the biggest producer of Bachelor passes in Grahamstown and remains the biggest feeder school for Rhodes University,” Westaway said.

“Specifically, Gadra produced its best ever results in Mathematics and Physical Sciences.”

A shortage of teachers contributed to the poor results of Nathaniel Nyaluza Secondary, principal Zakunzima Tyala told Grocott’s Mail. The school was without maths literature and economics teachers in the crucial first term of 2017. However, he is delighted that some pupils managed to achieve Bachelor’s passes.

Facilitator from Gadra Education, Aviwe Menze was on hand at TEM Mrwetyana Secondary School to offer a way forward for matric candidates who didn’t make the grade. While the school saw a 17.4% improvement in their pass rate over last year, fewer than half the class (42.85%) passed.

While the Eastern Cape Province achieved a 65% pass, school-going Matrics who enrolled for IkamvaYouth’s programme at the  Joza branch achieved an 85% pass rate, showing for the fifth year in a row that with commitment and support learners can beat the odds.

IkamvaYouth’s Joza branch offer academic support to learners attending schools in Joza. Of their 2017 programme participants who passed, 70% are eligible for tertiary studies (35% Bachelor and 35% Diploma).  The Joza branch was opened in 2013, making the class of 2017 its 4th matric cohort.

One of the top achieving learners from the class of 2017 is Lonwabo Sandi. He has been accepted at Rhodes University to study towards a BCom Accounting degree. Sandi thanked IkamvaYouth for providing him with tutors who contributed to his achievement, free internet so he could do research online, find study resources and apply online. He says he is coming back to be the best tutor IkamvaYouth has ever seen.

Joza Branch Coordinator, Nompumezo Makinana, said, “I am very pleased with the results that we achieved as a branch. Reflecting on all the challenges that the learners faced in 2017, I was quite anxious.

“The class of 2017 proved that with hard work and consistency anything is possible. The learners and their parents should be very proud of themselves for what they were able to achieve. From my side, I wish to acknowledge and give thanks to all the members of the Grahamstown community who supported our efforts, including the schools, volunteer tutors as well as the Rhodes University Community Engagement office.”

Grocott’s Mail had not yet obtained comment from Ntsika at the time of publishing. This will follow.