SA should gain from manufacturing growth 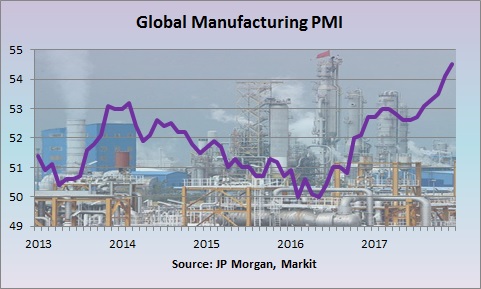 South Africa should benefit from strong global manufacturing growth as it is a vital cog in the global logistics chain as it supplies raw materials such as coal and iron ore to global destinations, while at the same time it has also moved up the value chain and provides vehicles and pharmaceuticals to some one hundred countries around the world.

The domestic logistics chain feeds into a global logistics chain, so events in the rest of the world have an impact on the South African logistics chain. The Baltic Dry Index (BDI), which measures the price of moving bulk raw materials such as coal and iron ore by sea, has doubled since July 2017 and is up more than four fold since February 2016, when the index bottomed at the 300 level. The BDI rose above 1,700 in December 2017 having gained more than 400 points since the middle of November. The index was last above 1,600 in January 2014.

This surge in the BDI is being driven by strong global manufacturing production as the JP Morgan Global Manufacturing Purchasing Managers’ Index (PMI) in December 2017 reached its highest level since February 2011. It has strengthened from 50.0 in May 2016 to 54.4 in December 2017. Growth was registered across the three main sectors of consumer, intermediate and capital goods sectors in December, with rates of expansion improving accelerating in all three. The strongest acceleration was in the intermediate goods category, followed closely by capital goods, while growth in consumer goods was more subdued.

National PMI data showed that growth was faster on average in developed nations than in emerging markets such as South Africa. The Eurozone area, which is South Africa’s largest trading partner, remained the strongest performing region, with its PMI hitting a record high. PMI readings in our BRICS partner countries also improved as the national PMIs hit a three-month high in China, surged to a five-year high in India, rose to a five-month high in Russia and remained in expansion territory in Brazil.

The good news is that new orders remain robust with the steepest gains in new export business since February 2011, so this upturn is sustainable and to a certain extent self-reinforcing, as strong manufacturing production results in increased employment, which in turn leads to more demand. The temporary constraint is that this strong growth is testing capacity, as highlighted by a solid increase in backlogs of work at manufacturing plants, but also in the logistics chain, which is why the BDI has increased so sharply.

In the US for instance trucking companies are confronting a shortage of human drivers. That has resulted in the ratio of loads in need of movement to trucks available in December rising to a record, as the move to online shopping shifts the burden of parcel carriage from the individual consumer to the parcel delivery company. Each day more than 120,000 cardboard boxes are delivered in the few hectares below 60th Street in Manhattan, whereas a decade ago those goods were carried by the individual.