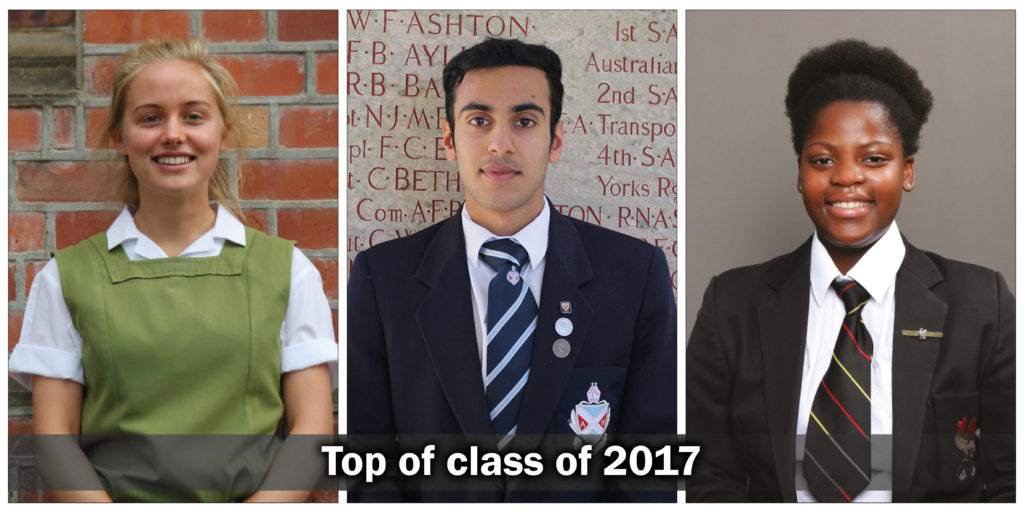 Alice Godlonton of the Diocesan School for Girls, Taha Anjum of St Andrew's College and Sanelisiwe Ndelebe of Kingswood College were the top performers at their respective schools in the IEB Matric exams. Photos supplied.

With eight subject distinctions, six of them over 90%, DSG matriculant Alice Godlonton emerged as Grahamstown’s top achiever as the Independent Examination Board (IEB) released their 2017 Matric results yesterday. A total of 11 464 candidates wrote the IEB National Senior Certificate this year and the national pass rate was 98.76%. The results were embargoed to today.

At the Diocesan School for Girls, three girls were listed on the IEB commendable list for being placed in the top 5% of all Matric IEB candidates in five subjects, while at Kingswood College, the top seven Matriculants garnered 32 distinctions between them and overall averages above 80%. At St Andrew’s College, the 2017 Matric results are the best in the history of the school, Headmaster Alan Thompson said yesterday.

St Andrew’s College’s Taha Anjum (Grahamstown/ King William’s Town) achieved a full house of distinctions. The school’s Matrics achieved a 100% pass rate and all qualified to study at tertiary level for degree (97%) or diploma (3%) courses. The 103 boys who wrote the exam achieved a total of 224 subject distinctions, the highest number of distinctions achieved by a Matric class at the school since the inception of the NSC in 2008, Thompson said.

Thompson said the school’s academic excellence programme included the integration of IT into teaching and learning and the implementation of a world-class iPad project, as well as the introduction of Cambridge A-levels.

DSG matriculants Alice Godlonton (Grahamstown), Caitlin Bailey (Knysna) and Annabelle Schaeffer (Johannesburg) were listed on the IEB commendable list for being placed in the top 5% of all Matric IEB candidates in five subjects.

Headmistress Shelley Frayne said, “We are proud of our academic record which I know can be largely attributed to the strong work ethic among our pupil body, good parental support and a well-trained, committed and dedicated academic staff.”

Sanelisiwe Ndlebe from Wesley, near Port Alfred, was Kingswood College’s top matriculant in a year that College Head Jonathan Trafford said had seen several personal bests for the group.

Grahamstown’s Thomas Stott obtained distinctions in Afrikaans, Engineering Graphics and Design, Information Technology, Mathematics and Physical Sciences. Stott won a scholarship to Rhodes University for his tertiary studies and plans to enrol for a BSc with specific focus on Computer Science, Mathematics and Physics as a foundation for a career as an engineer.

“While delighted with the results of our top achievers, this year’s results speak more to the achievements of the whole group,” Trafford said. “In a number of subject areas, notably Mathematics and Engineering and Graphic Design our pupils exceeded expectations.”

Of all the subjects written by Kingswood matriculants, over 74% of the marks were in the top categories (5, 6 and 7).

Results for the State NSC exams will be released by the Minister of Education tomorrow Thursday 4 January and 2017 matric candidates will be able to collect their results at schools and examination centres on Friday. The Department of Basic Education said a total of 802 636 candidates, 634 527 of them full-time pupils, sat for the exams that began on 16 October and ended on 28 November 2017.