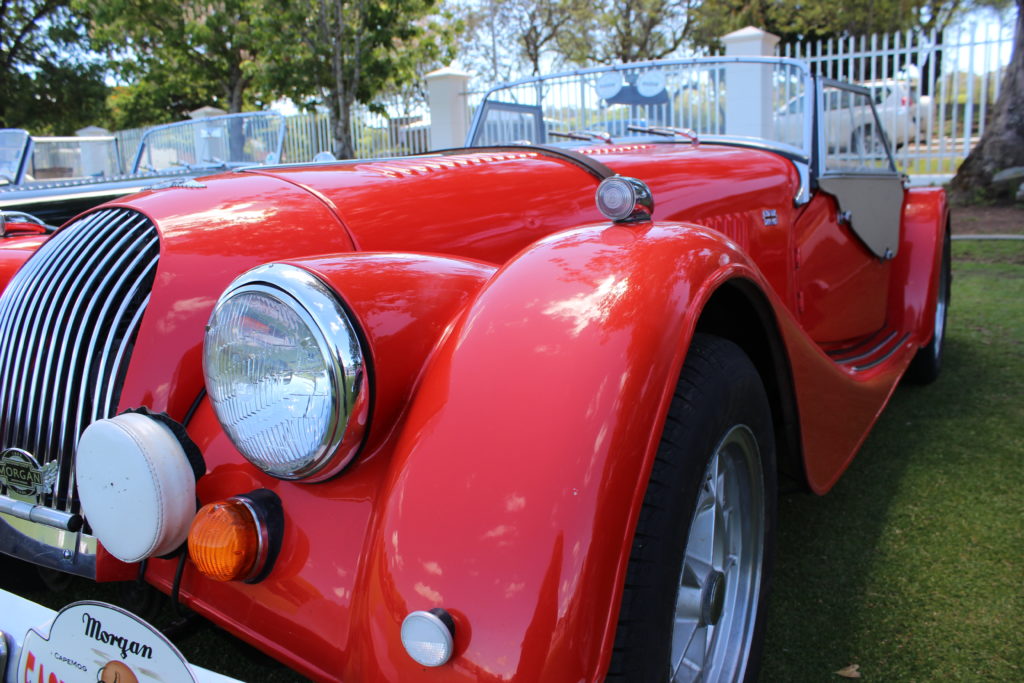 Around 15 Morgans rolled into town last Friday, turning heads and pulling in motorheads, classic aficionados and vintage-style fans alike. They were driven by CapeMog, the Western Cape register of the South African Morgan Owners’ Group, who were on their annual tour.

In Grahamstown they were welcomed by Basil Mills, who told them tales of Frontier history over tea at the Monument. He then took them on a tour of the NELM building and garden. Lunch followed at The Highlander – complete with a solo piper from St Andrew’s College – before the group drove to Kenton and Port Alfred for the next stage of their tour.

Mog owners Peter Pretorius and Tim Baker spoke enthusiastically to Grocott’s Mail about their cars. We also spoke to Grahamstown’s Norbert Drager of the Albany Vintage and Classic Motor Club, who was there with his 1964 Porsche 3653 to admire the collection.

The British sports car which is still hand-built came out with their first models in 1909 – two-seat or four-seat three-wheelers, considered to be cyclecars. Three-wheeled vehicles avoided the British tax on cars by being classified as motorcycles. Their most recent models are the 2012 (to present) Roadster 3.7 and the 2015 (to present) Morgan Aero 8.

Morgan say they produce more than 1300 cars a year, with a waiting list for a car anything between six months and 10 years. The cars are unusual because wood has been used in their construction for a century, for the chassis of several early models and still in the 21st century for the body shell.

Morgan cars can be found in many areas of motorsport, from club and historic racing to more prominent examples, including the Le Mans 24-hour race.
Baker, who drives a 2014 Roadster with a V6 3.7-litre Mustang (Ford) motor says it’s capable of going over 200km/h. “Mostly a comfortable speed is 100-120,” Baker said. “Beyond that is a bit blurry. I’ve driven a stretch at 140 and then took it to 170 for a blip – until my wife told me to behave.”

With a metal chassis and no sprung suspension, it’s not hard to go too fast. Light and strong ash is the wood used to hand-make the body.

Specs prospective owners can request include just about any colour of paintwork, or leather interior, with British Racing Green a firm favourite, Baker said.
You can buy a Morgan for the price of a good second-hand car, Baker said – his first car was under R400 000 – or all the way up to around R4 million for the “super-pernickety” 2017 Aero. “There’s no snobbery – anyone’s welcome, as long as it’s a Morgan you’re driving!”