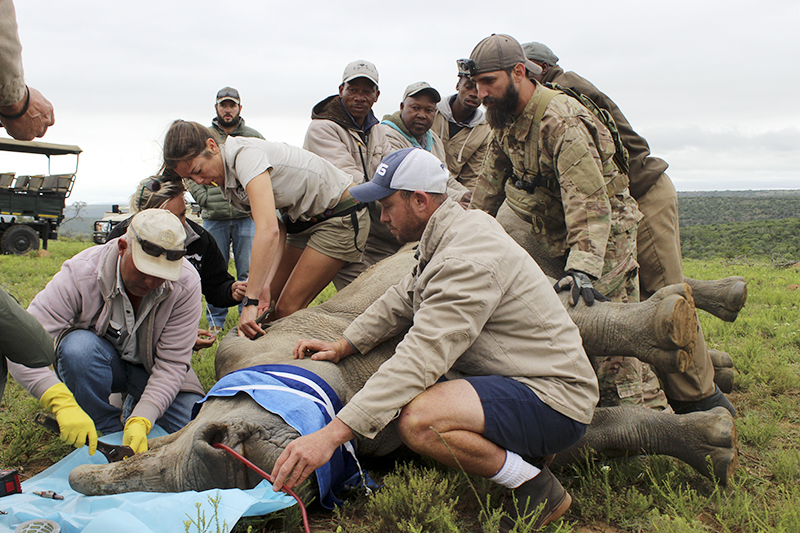 The Rhino Rescue Project supported by a team of top wildlife vets and rangers performs a procedure on the horn of a rhino at Buffalo Kloof reserve outside Grahamstown that renders it toxic and unuseable. Photo: Sue Maclennan

Media were invited to observe the procedure, which entails the infusion of a toxin and dye into the animals’ horns, rendering them unuseable to end users and therefore of no value to poachers.

The anti-poaching initiative first treated the horns of animals on the property of Warne and Wendy Rippon in July 2013. Rhino Rescue Project Manager Lorinda Hern, who together with colleague Dean Riley-Hawkins administered the treatment, said the original infusion compounds, although they resulted in a highly successful poaching deterrent in areas where treatments were implemented, often produced variable results from horn to horn.

“For this reason, a more consistent and long-lasting method to devalue rhino horns was sought, especially since the international ban on rhino horn trade had been upheld at CITES CoP17 in 2016,” Hern said.

“This resulted in the new custom-built infusion device, capable of delivering far greater pressures than the original, but altogether smaller and safer.”

A number of enhancements had been made to the treatment procedure, like hand-tooled non-return valves that remain inside a treated animal’s horn after infusion has been completed, allowing for pressure to be maintained inside the horn.

“This development allows for horn material to infuse slowly over time, long after the 20-minute treatment procedure has been concluded. It also allows for a treatment “top-up” of sorts, once horns start to grow out and re-administration may be required.” “The method has been surprisingly successful in all the reserves where we’ve implemented it,” Hern told Grocott’s Mail. “There have been only seven rhino deaths from all causes (i.e. including natural causes) during the past seven years in those reserves.”

Hern works at Dinakeng, a Big Five reserve near Pretoria and Johannesburg.

“It is our hope that the Department of Environmental Affairs will eventually be willing to treat all their stockpiles,” Hern said. “Considering their draft regulations, it would show that they are really serious about ensuring that illegal horns are not laundered into the legal market.

“As for the animals in the Eastern Cape, our only hope is that these treatments continue to give them at least some added protection from the continued threat of poaching.”

The Reserve’s Executive Director Warne Rippon believes this technique has gone a long way in achieving zero poaching incidents on their reserve, along with the efforts of their staff and anti poaching units.

“We see the procedure, which de-values these rhino horns, as an additional important layer of protection on top of the conventional measures. These protection systems include anti-poaching teams, helicopter patrols, intelligence gathering and various technology systems which are constantly being upgraded across the reserve, while we also improve our collaboration amongst other rhino reserves,” Warne said.

“The threat of rhino poaching in our area is increasing and we have to be pro-active in order to get ahead of this scourge, not just for our own rhino but also for the good of the whole area.”

Warne said in addition to the procedure performed at the reserve this week, they believed a possible Anti-Poaching Unit together with VetPaw would play a significant role towards the protection of the endangered rhino.

Dr William Fowlds, veterinarian and key role player in the protection of rhino, said, “The principle of horn devaluation has always made perfect sense as it targets those willing to consume or handle horns directly, while still being safe for the rhino.

“Today represents the ongoing efforts to keep innovating and improving techniques and toxins which contaminate the product and by doing so reduce demand,” Fowlds said. “This technique reduces potential rewards to poachers and when combined with several security measures, is designed to make poachers think twice about committing the crime of poaching.”

The bigger vision of Warne and others is a stewardship partnership with East Cape Parks to incorporate the Waters Meeting Nature Reserve and neighbouring farms, which would enable elephant and rhino to roam free on a 25 000ha reserve.

Already the fence has been removed between Buffalo Kloof and a neighbouring reserve, ahead of the introduction of 12 elephants to the reserve earlier this year.

“It is both a tactical and strategic deterrent which in my experience with organised criminals will negatively influence their decision to buy an infused horn. Remember for the oriental rhino horn purchaser it is all about appearance and the search for perfection. A stained horn is imperfect and therefore loses its appeal”, Visser said.

NOW WATCH WHAT HAPPENED ON THE RESERVE THIS WEEK:

VETERANS STEP IN FOR AFRICAN WILDLIFE

Among the team at Buffalo Kloof this week were former US Marines. They are members of VetPaw (Veterans Empowered to Protect African Wildlife), an organisation key to future plans for the protection of rhino.

Lynn Westover Jr, the South Africa Director of Operations for VetPaw, had spent the past week on the reserve, assessing security there. He told Grocott’s Mail their role was to bridge the gap between counter-poaching and security.

“Poaching is a human problem and it needs human solutions,” Westover said. “And it’s ultimately South Africans who will solve South African problems.”

VetPaw’s mission is to provide meaningful employment to skilled post 9/11 U.S. veterans and conserve critically endangered African species and their communities and ecosystems, Westover explained, through upskilling locals. African rangers were being enriched with valuable training garnered from the veterans’ years of law enforcement and combat experience.

“Not only will the Reserve’s rangers and staff receive this beneficial experience but also VetPaw intends to uplift the surrounding communities,” Westover said. Rapport with and awareness within the local community was the key to a holistic approach to protecting endangered wildlife.

FINDING AND DARTING THE RHINOS

A helicopter is used to locate and dart the rhinos. The ground support team is in constant contact with each other and the helicopter via radio.