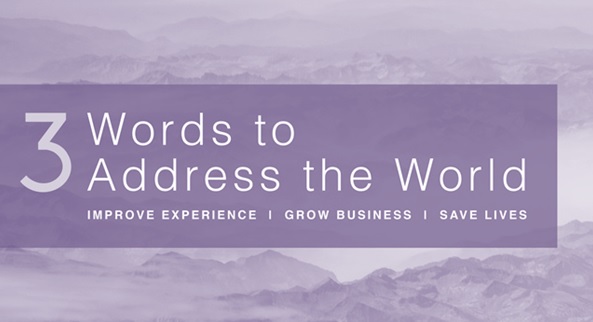 Former Rhodes journalism student Lyndsey Duff aims to address your mapping needs by dividing the world up into 3 metre by 3 metre boxes – each box having three unique words in 14 languages with isiXhosa, isiZulu and Afrikaans to follow shortly.

Duff was at the Africa Com conference in Cape Town to present her ideas and was rewarded with two awards for the most innovative app. The app she is promoting will eliminate the costly and time consuming effort when your GPS address is wrong. It addresses the problem of locating a person in a large building when all you have is a street address as the what3words box is only 3 metres wide.  It will also help when floods or bad weather prevent emergency services from reaching a person in need as the street signs are not visible or have been washed away.

As economist Hernando De Soto said: “Without an address you live outside the law, you might as well not exist,” so it is vital for very many reasons to have an address where people can reach you.

As three quarters of the world still has inadequate, poor or no addressing systems, what3words divided the world into 57 trillion squares. For example, ///index.home.raft is the three-word address for the entrance of what3words’ London office. It’s a very simple way to talk about location and to remember, write, share and communicate an address.

This address can be simply entered into apps and maps, just like a zip code, street address or
GPS coordinate.

After studying at Rhodes University, Duff went to the London School of Economics  to earn a MSc in International Relations. She then became an advocate for the growing South African technology ecosystem and did all she could to funnel investment into it. She believes that enabling technology  will transform the lives of ordinary Africans more than any traditional mechanisms of funding or aid ever could.

The opportunity for what3words to transform South African business across a variety of areas is enormous, as experience in other countries has allowed them to build a treasure trove of case studies in everything from logistics and e-commerce, to navigation and humanitarian aid.

More significantly, Mongolia, Cote d’Ivoire and a host of other countries have adopted what3words as an official postal system. Postal partners across the world can now deliver to three-word addresses.