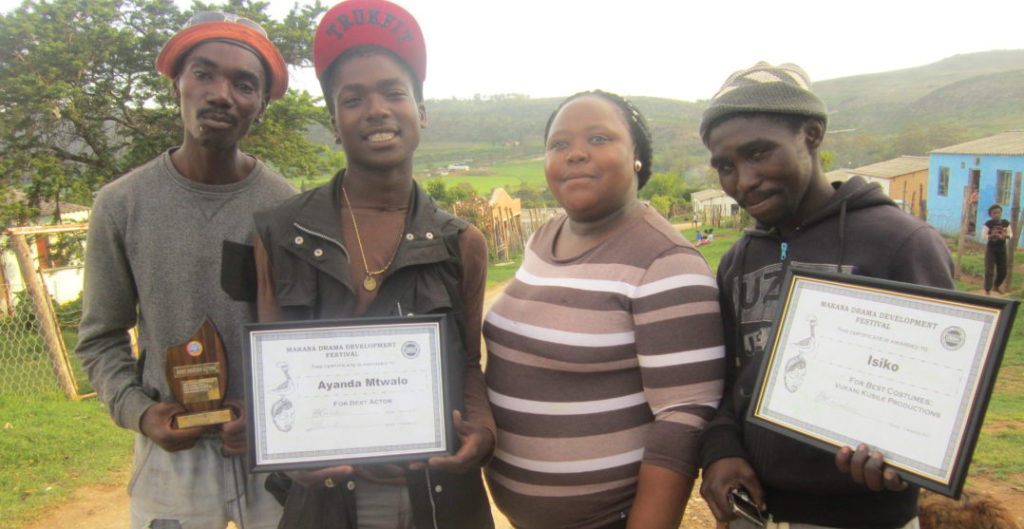 Education, and opportunities mean everything to Vukani based actor and writer Ayanda Mthwalo, who was named best actor at the Makana Drama Development Festival hosted by Ubom! Eastern Cape Drama Company at the Rhodes Theatre on Saturday 11 November.

The annual festival showcases community drama productions. Junior and Senior Community drama groups performed and winners of the Senior group will be invited to apply for the National Arts Festival Fringe programme and assisted to develop their production.

Mthwalo’s group, Vukani Kusile, was formed in August last year – and it means more to him than most people can imagine. Mthwalo was released on parole from prison last year, having served five years and seven months of a 12-year sentence.

“I decided to change my mind and my way of living,” Mthwalo said.

He removed himself from gangsterism and became involved with soccer and volleyball, he said. And then into his life came drama – through a programme led by Rhodes University Drama lecturer Alex Sutherland.

Performances inside and outside prison followed – even performances at the National Arts Festival.

Mthwalo’s hard work paid off. He was named Best Senior Actor at the Drama Development Festival in 2014. In 2016 he’d intended to defend his title – but not according to the slow-moving prison procedures.The official in charge of recreation failed to arrange permission for him to perform at Rhodes.

That’s why it meant a lot for him to regain the title this year.

A part-time drama teacher at Nathaniel Nyaluza High School, Mthwalo  is enthusiastic about the benefits of doing drama.

“For school children it’s an advantage,” he says. “It gives them and advantage, and a headstart for University or College.

Mthwalo says he can write and perform pieces according to themes: health awareness, spirituality and gangsterism (“crime does not pay”), as well as being straight-up funny.

He’s very grateful for the second chance the community has given him.

“The clothes they gave me in prison were written Correctional Services – which means I have been corrected on my mistakes,” Mthwalo says.

Prison is not good for anyone, he says.

“The only thing that put me behind bars was when people beat me,” Mthwalo said. “I defended myself by stabbing the person back and he passed away.”

It was not because he wanted to kill.

“You don’t need to be corrected by prison like me,” Mthwalo said. Urgning young people to join drama groups, he said education was the key to success.

At various editions of the Makana Drama Development Festivals, Mthwalo has received a number of awards:

Actor with the Most Potential – November 2015

Mthwalo requests assistance in providing costumes and transport for the children he coaches and directs and says he’s available to perform at any event. Call him at 073 481 9053.