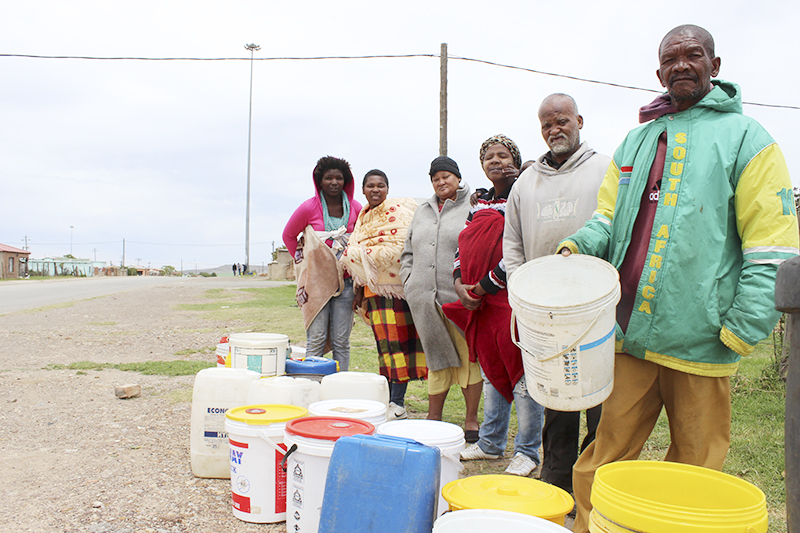 Residents wait for a water truck in Nompondo Street during an extended water outage in the file photo. With Day Zero at current useage levels predicted to be fewer than 130 days away, queueing for water could become a daily reality. Photo: Sue Maclennan

Councillors and senior officials rushed through an infrastructure portfolio committee meeting on Thursday 9 November to get to the site of the crisis that had seen most of Joza go without water since Wednesday night. Meanwhile, residents queued with buckets at the roadsides to wait for water to be delivered in tankers.

Makana’s head of electrical engineering Mzomhle Radu and Water and Sanitation Manager Ntombi Tshicilela in Thursday meeting in the Council Chamber told councillors of days of attempting to keep at least one pump running at the James Kleynhans Water Treatment Works north of Grahamstown. The pump station supplies Botha’s Hill reservoir, the supply source for most of Joza.

The pumps are repaired and serviced by Joburg based specialists Sulzer whose technicians, deployed to fix the specialised equipment at sites across the subcontinent, worked from Tuesday to connect the standby pump and remove a broken pump. The policy at the pump stations is to have three pumps: two operating and one on standby.

Infrastructure and Technical Services Director Dali Mlenzana explained that the facility had been down to one pump only, which kept tripping because it was operating overheating. While they waited for the Sulzer technicians, it had to be switched off to cool for periods – which meant the supply to Botha’s Hill (and thus Joza) was already down to half.

On Wednesday when it came to connecting the standby pump, the Sulzer technicians realised they didn’t have the right cooling pipe coupling.

Desperate to keep the supply going, Makana’s technicians restarted the faulty pump, having done what they could to prevent overheating. At 6pm on Wednesday it could run no longer.

Infrastructure portfolio chair Mabhuti Matyumza recalled Grahamstown’s water crises every year since 2013. The most recent was 2016 when the pump station at James Kleynhans was flooded on the eve of the National Arts Festival, leading to emergency measures and the eventual dismissal of an employee.

The urgency of solving the crisis and communicating with the public about it, an eye-watering staff overtime bill and the intransigence of a housing official – whose job functions are junior but who earns a senior manager’s salary, on account of a court order in a labour dispute – were focused on before Matyumza along with Mlenzana and his deputy Sonwabile Nomandela headed to the pump station in support of the technicians.

Grocott’s Mail went to Joza, where people were queueing at the side of the road, waiting for water trucks deployed to schools and clinics in Joza.

“Actually it’s been weeks since we really had water,” said Aphiwe Ngqomiya, who had taken buckets to the nearest available water tank to fill. “It comes and goes all the time. It’s really hard because we have flush toilets and when there’s no water, we have to use water from a neighbour’s tank.”

Further down Nompondo Street Bongani Diko, whose Lingacy Art Gallery is just around the corner, said, “No, not days: years since it’s been coming and going. Why is it still not solved?”

Makana Communications reported around lunchtime yesterday that technicians were working to resolve the crisis and when the supply resumed, to the schedule of supplying water only from 5am to 8am and 5pm to 8pm would continue until the pumps were fully operational.

“Residents are advised to use these times to collect enough water to last them for the whole day as we will be having six hours of water per day,” the communications team said. The rationing was in order to restore the supply levels at the reservoirs as backup.

James Kleynhans is Makana’s biggest water supply source, with Mlenzana reporting 294 326 kilolitres treated there in August 2017 (compared to 198 127 at Waainek in the same month).

On the water and sanitation agenda

Water and sanitation related items for the Infrastructure and Technical Services Portfolio Committee meeting yesterday included:
* A drought intervention plan for Makana drafted by a consultant appointed by the district municipality;
* Incident management and emergency response protocols for all water schemes and waste water treatment works in Makana;
* An investigation into the alleged soliciting of bribes by some drivers of water supply trucks;
* The establishment of increased 24-hour security for the Belmont sewage works (they were vandalised twice earlier this year, at great cost to the City);