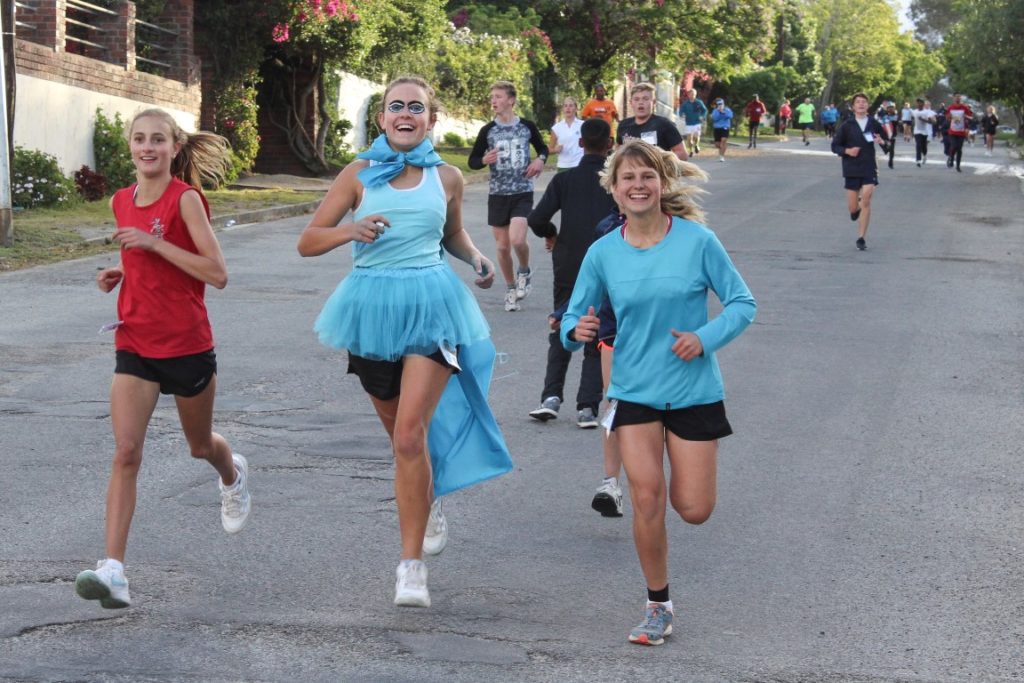 Hundreds of athletes took to the streets of Grahamstown on Thursday 19 October for the annual Rapportryers Hoërskool PJ Olivier 5km Fun Run/Walk. This year’s event attracted over 300 entries, and R12 000 raised for the Grahamstown Residents’ Association (GRA).

The race was won by Masixole Xayiya in 20 minutes 07 seconds; followed home by Stegman van Zyl in 20:30. DSG pupil, Kendal Rose was the women’s winner in 22:42, followed by Terri-Lynn Penney in 25:52 and Jene Banfield in 26:11. The first PJ Olivier pupil home was Daniel Retief who finished in 23:32.

The 5km athletes made their way along Market Street (from the start in the PJ complex), into York Street before going uphill on Whiteside Street, Jackson Street into George Street to the veterinary clinic and back to the school. They were joined by primary school pupils who started at the veterinary clinic for a 2km run/walk.

This was the 22nd running of the tough event.

According to fun run organiser and PJ Olivier headmaster, Joubert Retief, numbers were down from previous years which he said “weather affected participation”.  Retief said each finisher received a spot prize , while the top three men and women received some cash.

A ceremony was held in the school club to thank stakeholders and sponsors for supporting the event, before the cheque was handed over to the GRA representative Tim Bull.

The money will fund a GRA project to beautify High Street, for which members have big plans. According to a GRA post on Facebook, “all proceeds are being paid to Grahamstown Residents’ Association to initiate a project which aims to enhance the City Centre. The project involves planting indigenous plants, mainly aloes, at high-profile locations such as High Street, together with use of rocks and cobbles to make attractive hard-wearing features. We hope to showcase beautiful planting so that we can build further and plant more – please contact GRA if you want to help”.