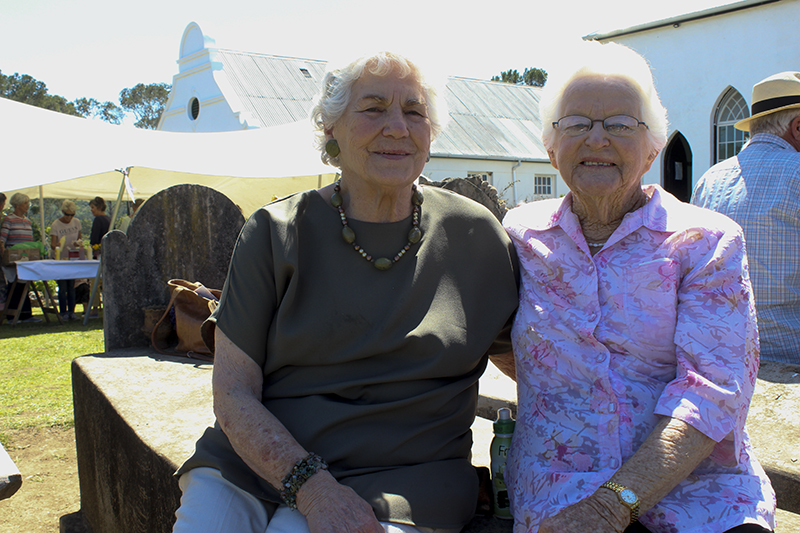 Gay Ford and Phyl Long, both from Settlers Park, perch on a gravestone to enjoy the sunshine and the view across the valley during Saturday’s 150-year celebrations at Clumber Church. A lot of Phyl’s in-law ancestors are buried in the area.

Clumber Church near Bathurst celebrated their 150-year anniversary in true country hospitality style last weekend, with a bash that started with a shindig at the Pig n Whistle on Friday and ended with a on Sunday where Methodist Bishop Andile Mbete led a special service that featured the DSG Chapel Choir and a piper. Grocott’s Mail caught some of the musical action on Saturday, including The Keiskamma Music Academy, Mnaza Choir, Port Alfred Scottish Dancers, St Andrew’s and DSG Wind Orchestra, Noxolo Children’s Choir, Full Gospel Church Band and the Graeme College Steel Band. Speaking to Grocott’s Mail in this video are host and MC media personality Jeremy Mansfield and Avonne Pickering – at the Grave of her forebear, Grace Brent. Grace and her husband Thomas Brent were among the 158-strong Nottingham Party that found themselves at the site of the church – then thick thorn bush – on 25 July 1820. Their six-month journey from Nottingham had been funded by noblemen from their local parish because they were too poor to buy their own passage. Altogether 3 700 people, mostly tradesmen and their families, fled that part of England – one of the worst hit by the Industrial Revolution and the after-effects of the Napoleonic Wars. Petitions, were followed by riots, met with force by the state, as starvation and the inability to earn a living wage drove them to leave their home in the hope of building a life here in the Eastern Cape.