Rolling out the fun 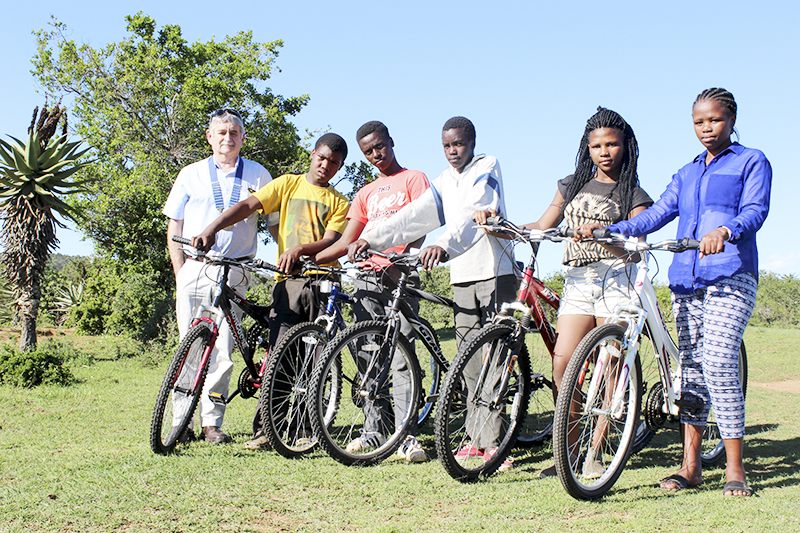 Chairman of Rotary’s Grahamstown Sunset branch Tim Dold congratulates (left to right) Anele Peter (15), Siviwe Tokwe (16), Siphelo Mbekela (15), Noziqhamo Nakele (12 and her sister Sinokhanyo Nakele (15) on the bicycles they received this week through the organisation, at the handover at Manley Flats on Wednesday. Story on Page 3. Photo: Sue Maclennan

The children live on a state-owned farm on which their parents have built the Manley Flats Community Trails.  Their parents are beneficiaries on the land who maintain the hiking, mountain bike and 4×4 trails. All proceeds from the trail go to the Sikhululekile Community.

Users pay R30 for a day’s use of the trails into an honesty box at their starting point, Radway Green, where trail-co-founder Leonie Yendall lives.

This week’s handover was a spinoff of the reCycle project started by avid cyclist and Port Alfred resident Helen Averbuch earlier this year. Initially its aim was to give bicycles to the children of that community. The project has taken off, though, with generous donations of second-hand bikes allowing Averbuch to share the joy of motion with adult commuters in Grahamstown and Port Alfred.

This week’s donation from Rotary came from the Rotary Club of Empangeni, who rode the bikes to Grahamstown for Rotary’s District Conference here in May. They donated the bikes to the four host clubs. Grahamstown Sunset knew about the recycle project and the Sikhululekile Community families and decided their five bikes would go to this fun family project.

Speaking about the Sikhululekile bicycles, Yendall said they were just for fun.

“The R67 is too dangerous for the children to ride on, so these bikes are just for them to enjoy the trails, and to experience the pride of ownership.”