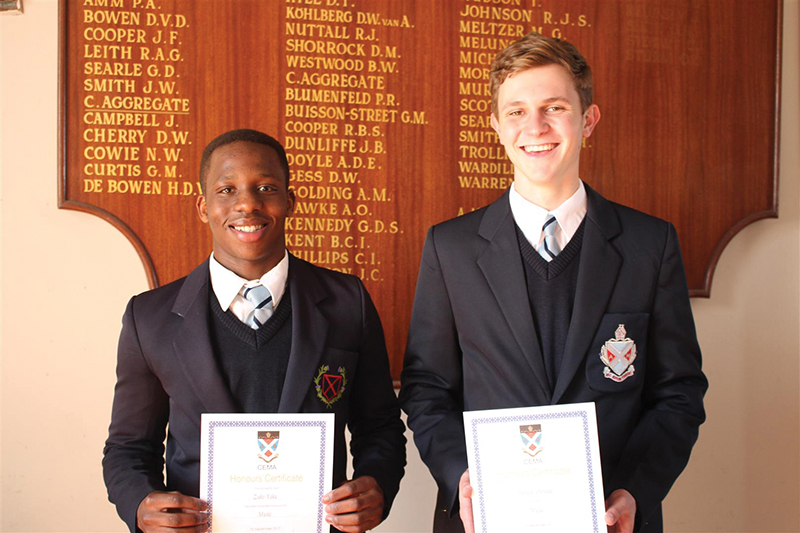 Zuko Yaka (left) and Francis Christie were the recipients of the Music Honours award at St Andrew's College. Photo: Supplied

Since arriving at St Andrew’s Prep in 2011, Zuko has performed regularly for school concerts and achieved his Trinity College Grade 8 in Drum Kit in his Grade 11 year. He is also a very capable pianist and bass guitarist. Zuko has sung in the school’s Chapel Choir and Chamber Choir for many years, as well as a member of the the Jazz Ensemble and Wind Orchestra, Contemporary Band and String Ensemble. He has regularly attended the Standard Bank National Youth Jazz Festival and in 2016 was selected for the National Schools’ B Band. In February, Zuko and his long-standing musical partner, Francis Christie, performed for half an hour to a very large audience at the Paul Cluver Amphitheatre in the Western Cape as a curtainraiser for the famous Watershed band took to the stage.

Francis Christie has been a regular performer in school concerts, as well as Acoustic Café gigs in town. He has sung in the school’s Chapel Choir and Chamber Choir but is best known as a guitarist. He achieved his Rockschool Grade 8 guitar certificate in 2015 and has been a member of the school’s Jazz Ensemble and Contemporary Band. A strong improviser, he has attended the Standard Bank National Youth Jazz Festival for the past few years.