Nothing but the Trantraal truth 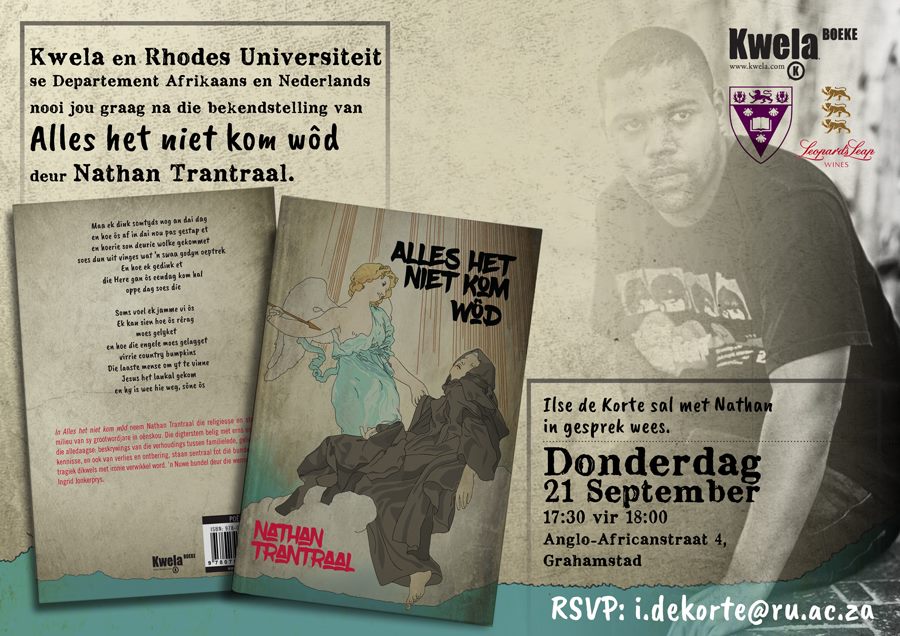 Nathan Trantraal speaks fast, without second-guessing anything taboo. He spews out swear words as naturally as his hands fidget – fast and without mulling over the movements. “I like to find the worst in people; the part that gets angry. That’s where the dignity lies,” he says.

His confident way of speaking reflects his carefree and authentic personality, the same one that seeps through his writing, drenching pages with what he considers to be the accurate truth. The Cape Town cartoonist sits among third year Writing & Editing students, alongside his wife and daughter, as though he is with old friends at a dinner table. “The truth adds such a fucking flavour to fiction that you can’t get anywhere else,” says Trantraal as he explains how he produced his beloved co-written comic book Coloureds.

Trantraal has come a long way since doodling on matchboxes and their cousin, boxes of Dunhill 30s. Now, he is a published poet and a columnist for Rapport newspaper but it’s taken a long time for him to get here.

Hailing from Cape Town, Trantraal works closely with his brother and co-writer, André. He has no regard for political correctness and has worked his way up in the publishing world by drawing raw and accurate pictures of the aggression and hardships that come with growing up coloured in Cape Town. Trantraal rejects the way many South African authors praise coloured people, portraying them as happy all the time instead of multifaceted people with real emotions.

“The anger is authentic,” he explains, as he discusses the comic book that he produced alongside his brother. After matriculating, and before his publishing success, he bounced between temporary jobs, living with his single mom and five siblings. He never intended on going to university, knowing he wanted to be a creative for the rest of his life, but his countless rejections made it easy to be discouraged. “I was very good at making excuses, but then I found out you can’t work that way,” he says.

To counteract their innumerable rejections, André sent a picture drawn by Nathan to the Cape Argus as a last resort to see if the brothers could make it as writers and cartoonists. The image became their eventual salvation as, on the basis of his drawing, the brothers were commissioned to make a 20-page comic for a fee of R20 000. “It’s the most amount of money I’d ever had at one time –  it’s still the most amount of money I’ve ever had to this day,” he confesses.

Thrilled with this debut opportunity, the brothers continued illustrating and writing comics, continued being rejected, and continued trying all over again. Together, the brothers wrote Coloureds as a 100-page book, but eventually cut it down to a 12-page comic, realising it was never going to sell as they originally planned. The success of Coloureds took off in Cape Town book shops and was the bestselling local comic for three consecutive years.

Trantraal’s first poetry collection, Chokers en Survivors, features the Kaaps dialect which Trantraal has made his own on the page. Published by Kwela in 2015, the book went on to win the Ingrid Jonker Prize which is awarded annually to an Afrikaans or English debut poetry collection. The collection was hailed for its “strong and unpretentious commentary on the hopeless social environment” of the Cape Flats.

He is unapologetic in every sense of the word as he fiddles with his cigarette box and aligns and taps the pages he has prepared to read to us students. He is authentically himself, down to his casual attire and impenitent Capetonian accent that allows his ‘r’s to roll and his ‘ag’s to brush off any concerns. He affirms his creative expression and his nonchalant attitude with his last piece of advice: “Whatever comes to mind, write it down.” Trantraal chats to the JMS 3 class.