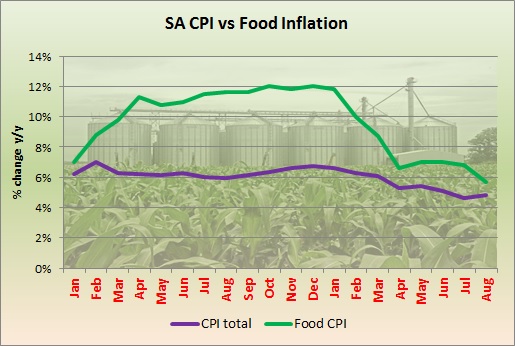 Although food inflation slowed to 5.7% year-on-year (y/y) in August from 6.8% y/y in July, this was not enough to prevent a rise in the overall consumer inflation to 4.8% y/y in August from 4.6% y/y in July. This rise was largely due to a swing in the fuel price inflation from a 3.6% y/y decline in July to a 5.7% y/y increase in August. The bad news is that there is likely to be 30 cent per litre increase in the petrol price in October. The good news is that the y/y increase in the fuel price in October should moderate to 11.3% from September’s 12.7%.

The bad news on consumer inflation in August was to a certain extent offset by the good news that domestic economy activity as reflected in the BankservAfrica Economic Transaction Index (BETI) increased by more than 1% in real terms on a y/y basis for the first time since September 2016. Moreover, both the monthly and quarterly changes also increased, which is the first time since April 2016 that all three (monthly, quarterly and yearly) period measures are positive. The 1.1% y/y increase real gross domestic product (GDP) in the first half of this year largely reflected the rebound in farming and mining, while the July and August y/y increases in the BETI show that the growth in the primary sector is now spreading to the rest of the economy and Grahamstown will reap the benefits of the ripple effects. Real time clearing, for example, recorded the highest growth with a stupendous 32.6% y/y surge. It is after all money that makes the world go around. The standardised value of the total transactions was R817.9 billion for August 2017, which was the first time that a month outside of a December exceeded the R810 billion level. Mike Schussler from economists.co.za suggested that the jump in value was higher than usual and possibly indicated that significant economic activity was held back by the recent credit rating downgrades, in other words the logjam caused by poor business and consumer confidence has been cleared.

The BETI is good at capturing economic activity across a broad number of sectors and shows a close relationship to the overall economy, although much of the mining sector’s income does not go through the normal national payments system. That is why it is also important to watch the value of mineral sales and the volume increases of the bulk export of commodities, which are up 6.8% y/y in the first eight months of this year.